J K Rowling is undoubtedly one of the most gifted writers around today. The fact is self-evident considering the super success of her Harry Potter series. We never had enough of it. 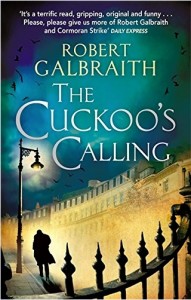 Then she departed from the world of magic and wrote a tale of small town (The Casual Vacancy) located in the very real world that we are living in, without shying away from voicing the biggest problems we are facing – the dissipation of our youngsters and the blurry lines around morals and depravity of the older generations.

But, her prime message always remains that of hope and goodness.

Naturally, not all the readers of Harry Potter would have understood or enjoyed The Casual Vacancy and it all went a bit quiet on the JKR front.

Then in April 2013, a new thriller writer appeared on publishing horizon – Robert Galbraith. He created a detective called Cormoran Strike, gave him an assistant called Robin and on they went to resolve a murder of a celebrity.

There are literally thousands of crime thrillers published worldwide every year, no reason for a story to stand out – unless it is of a stand-out quality. The book surprised the critics who admired it and was steadily registering sale of approximately 8500 copies (in all formats), when in July, 2013 it was declared that Robert Galbraith was a pseudonym adapted by J K Rowling. The sales surged, all the critics around the world rallied to praise the book and it went on to become a best-seller, but we think that the point was proven. She had once again succeeded in creating contemporary characters, living in the modern world and had told a very good story.

Detective fiction has given us so many scintillating and memorable characters that having a stand-out detective has become a cornerstone for every new writer attempting the genre. Rowling has presented us with Cormoran Strike.

An illegitimate child of a famous rockstar, Cormoran grew up in a dysfunctional family. He is not traditionally handsome and it was to everyone’s surprise that he scored beautiful and elegant Charlotte as a girlfriend in his college days. The relationship however has been tormenting and damaged from the start. Strike joined the armed forces, went to Afghan war and lost a leg. Not fit for fighting the enemies across the border anymore, he has lately set up a business as a private investigator, which by no means is booming. When we meet him in the book, he wears a prosthetic, has just broken up with Charlotte umpteenth time and has no place to live but his little office as a private investigator.

Robin on another hand is all hope and sunshine – a pretty young lady who has just become engaged to a long-time boyfriend, has moved to town and is looking for a job. She is sent to Strike’s office as a temporary secretary. The first encounter is far from friendly. But, slowly she discovers Strike’s troubles and starts to grow sympathetic. She is competent and under the surface she has always had an affinity for detective work. The book hints a few times about troubles in past, but no details.

Now as it usually happens, one morning John Bristow comes to Strike’s office and unintentionally hands him over the first case that will be the making of him. Supermodel Lula Landry aka Cuckoo was killed after falling from her apartment. The acquaintance between Strike and the Bristows goes a long way back – John’s brother Charlie was Strike’s childhood friend and Lula was their adopted mixed-race sister.

Strike takes up the case halfheartedly; for one thing the incident happened three months ago and the police seem to have interrogated everyone involved with Lula. But, he goes ahead and painstakingly interviews friends, family and witnesses, becoming aware on the way that the train of events on the night of the death as described by witnesses is presenting a very ambiguous scene with key questions left unanswered. Can he find the right answers and solve the mystery?

We follow Strike as he picks his way from the world of ‘rich and famous’ of London, discovering and accumulating facts about Lula and her surroundings. There are also separate threads running through Strike’s past and present love life as well as Robin’s personal life. The initial skepticism between them slowly turns into companionship and together they do unmask the murderer. Strike breaks free on many levels with this success and at the end of this book he offers Robin a ‘not-so-temporary’ position asking her to stay on. She happily accepts.

The book displays all the signature aspects of a work by J K Rowling including complicated and colorful characters, attention to details, build-up to a mystery and climax, acute observation and description of settings and a solid story. Due to its strong dramatic potential, BBC One has declared that it will be converted into a drama series soon.

We enjoyed the book immensely (8 out of 10) and couldn’t wait to get hold of the second installment in the series called “The Silkworm“.

Watch out for the reviews for The Silkworm…

The third installment in the segment – Career of Evil

– is released today. Have you ordered it?