One of the most eagerly awaited books of 2015 is here….yes, it’s J K Rowling writing as Robert Galbraith again and we get to out with Cormoran Strike on yet another macabre adventure. Career of Evil was released on Oct 20, 2015 and is undoubtedly going to be a best-seller, if the pre-release bookings are any indication. 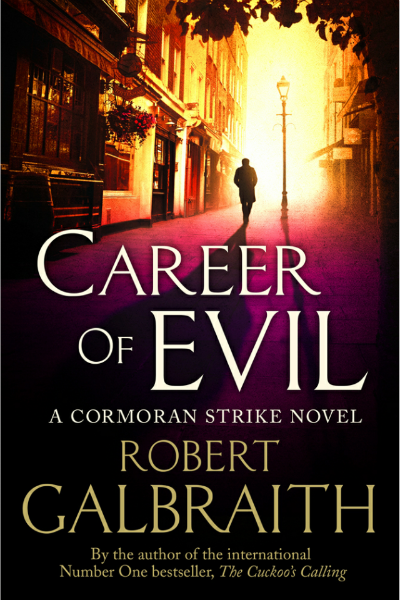 In the old world of literature, most stories were written as complete, stand-alones, i.e., the characters were formed fully and the story had definite beginnings and ends. But the golden era of detective fiction that marked the early 19th century, changed this perception. The famous detectives including Sherlock Holmes, Hercule Poirot, Lord Peter Wimsey, etc. (The list is pretty much endless) lived on from one story to another. And even after the original creators died, the characters survived through endless number of other authors, playwrights, TV writers and cinema directors.

It is a small wonder that all popular authors of the day also have created their main characters that go on with one after another adventures, e.g., Lee Child’s Jack Reacher, Richard Castles’s Nikki Heat and Derric Storm, Stieg Larsen’s Mikael Blomkvist and Lizbeth Salander or Jason Borne of the Robert Ludlum books. Every author has a following audience and well-defined characteristics which keep building up on the past, present or future with each new book.

So, we were only too happy when J K Rowling brought her phenomenal story-telling abilities to the genre and gave us Cormoran Strike and Robin Ellacott. Like the Harry Potter series, the first book (The Cuckoo’s Calling) was a lovely, fast paced intro, with hints of past of the main characters, but no gory details. “The Silkworm” was a remarkable few paces higher on the macabre scale, but it is the third installment that takes the pitch of the story even higher in the world of grotesque, but it is also remarkable for the fact that it tells us much more about the pasts of the two main characters.

On one uncommonly ordinary London morning, when Robin’s main worries are related mainly to the fast approaching wedding with Matthew, she receives a courier and nothing will be the same afterwards. The package contains a woman’s severed leg, all complete with a card and lyrics from an intelligentsia heavy metal band called “Blue Oyster Cult”. Now, if any normal person was sent such a gift and the police asked:

Do you know of anyone who could send you something like this?

The answer at best would be bewilderment. But, not Strike, he can think of at least four persons who could do this….

Yup, that’s right…and so from this moment, the hunt is on.

And so while the present dilemma of the mutual attraction between Strike and Robin continues, he also finally starts telling her about his past…not all of it, but stories, a few bits at a time, when forced to do so.

The first suspect comes from Strike’s own dysfunctional family, his sadistic stepfather Jeff Whitaker, who was accused of killing his mother, but was not convicted. Jeff Whitaker is personified evil, as far as Strike is concerned.

The second suspect is Donald Laing, a vicious sociopath, who was sent to jail on Strike’s evidence for brutally assaulting his wife.

The third suspect is Noel Brockbank, a pedophile with a horrible track record of assaulting young girls, but who managed to escape the judicial sentence.

The fourth suspect is a gangster called Digger Malley, who was convicted after a private testimony by Strike and who in past has shown a penchant for cutting organs off his victims.

The police focus on the gangster angle, so Strike and Robin have no choice but to track the other three suspects on their own, on top of their routine paying surveillance jobs. The business however, dwindles down to zero thanks to the negative publicity and soon they are left with nothing but investigating the psychopath who is strategically racking their lives.

The victim whose leg was cut and sent to Robin is eventually identified as a teenage girl called Kelsey, who was a pathological liar and a borderline acrotomophiliac – meaning people who are fascinated with amputees. The book is full of references to psychological disorders that involve a strange wish to become a handicapped. While Robin is quite successful at tracing back a lot of details about Kelsey’s life, the investigation leads them to one dead end after another in terms of all three other victims, until at long last they trace all three of these back to present day London.

Meanwhile, the personal lives of both are far from peaceful, as Robin breaks up with her fiancee, and Strike is finding his current girlfriend more and more incompatible. During a sad and drunken aftermath after the break-up, Robin finally tells Strike about the evening when she became victim of a serial rapist, who strangled her afterwards, and left her for dead. She survived and the perpetrator was convicted based on her testimony, but events like these never really stop hurting and the incident left her scarred nevertheless.

The fact that she is being systematically stalked by a serial killer who operates on an extremely dangerous psychopathic level, doesn’t help the situation as Strike wants Robin off the streets and safe. Robin sees this as a betrayal by Strike of all the hard work and commitment she has put into the job and one thing after another leads to a very strained professional relationship between them.

So, it appears like everything is going as the killer planned, Strike’s business nearly dead, his personal life on the rocks, Robin continuously under the killer’s watch and vulnerable, and his identity secret, even after he attempts a few more murders and is now known as the “Shacklewell Ripper” with at least six crimes to his name. A “Career of Evil” alright…….

Will Strike survive this very well planned line of attack? Will he ever get one of his epiphanies that will solve the crime, or will he end up losing everything that matters to him, including Robin?

The book is of course a good choice for thriller lovers.