This second adventure by private detective Cormoran Strike was published in June, 2014. When we left Strike and Robin at the end of “The Cuckoo’s Calling“, they had just solved their first celebrity case and also started to bond. 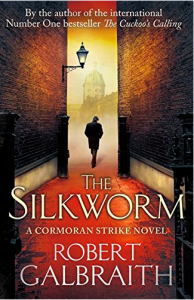 We meet them now in the following year, the business is steady. Boring however considering it mostly comprises of divorce cases and odd work for tabloid journalists. Then Leonara Quine comes to Strike’s office with a plea to locate her missing husband.

The missing husband in case is writer Owen Quine who showed promise and originality at the start of his career but has been struggling for many years now to match the success of his original work. His latest work called Bombyx Mori (latin for The Silkworm) is termed to be the most ambitious novel of his career and his disappearance is suspected to be linked to the leak of its manuscript.

Owen’s writing has always been borderline obnoxious featuring rape, sadomasochism, cannibalism, twisted psychotic behaviors, sadistic torture,etc. And Bombyx Mori is considered an epitome of it all by the publishing world. Another factor that makes it unpublishable is that Owen has created the lead character to resemble himself and rest of the characters in Bombyx Mori are easily identifiable, twisted metaphors for people in his life – a sort of unofficial, allegorical biography.

All metaphors however have some grain of truth and it is believed that one of the thinly-veiled characters in his book was enraged enough to bring harm to him. This is proven beyond doubt when his body is found in an abandoned house, bound, mutilated, mangled with acid and arranged like a piece of meat on a dinner table, with plates and cutlery complete. Yes, you are allowed to throw up!!!!!

The police strongly suspects Leonara who is not forthcoming with information and is being difficult, to say the least. But, Strike believes she is innocent and his mission becomes urgent now that he wants to restore Leonara to her mentally challenged daughter. The investigation leads Strike through the contemporary publishing world, gathering clues, considering and discarding suspects until he locates the killer. More importantly, Robin gets to play a much more active part in the investigation and Strike is ready to take her on as an apprentice by the end of this book.

The crime described here is beyond a doubt ghastly, but then usually real lives are far from perfect. An embittered and artistic man is far more damaging to his friends and family compared to a good-nature bovine. The over-sensibility and the aggravated sense of injustice combined with lack of compassion and empathy very easily leads to a spiteful loner who is spewing hatred over everyone and everything.

And there is a breaking point on every string, once that is reached, the recoil usually brings disastrous consequences in its wake. That’s what happens in this book filled with so many characters hiding silent suffering and grudges, distorted morals and streaks of sadism and cruelty that beget the appalling and hideous murder.

The book is rich with details as usual, all characters created to show off to hilt their faults and their strengths. J K Rowling once again shows her acute observation powers for real life and makes even this grotesque sequences bearable. We would say 7.5 out of 10.

Strike and Robin will continue their adventures in the next segment “Career of Evil“, which was published in October, 2015.