The perks of being a professional book reviewer, that to be associated with prestigious Team ThinkerViews, includes getting exposed to new remarkable talents. In one such incident, we came to know about Bhim Singh Bobanga, who loves referring himself just as – Bobanga.

He is an aspiring author and our association with him initiated in the context of his book The Disappointing 5, with the tagline: When failures turn into heroes. The book is for mature readers who love to enjoy reading and at the same time are also keen to get inspired by the content.

Let us take a look at the coverage of this book.

Of course, one cannot judge a book solely based on its cover, and one must not. However, we cannot deny the influence of a book cover (in both positive and negative aspects) on a large number of purchase and/or reading decisions. 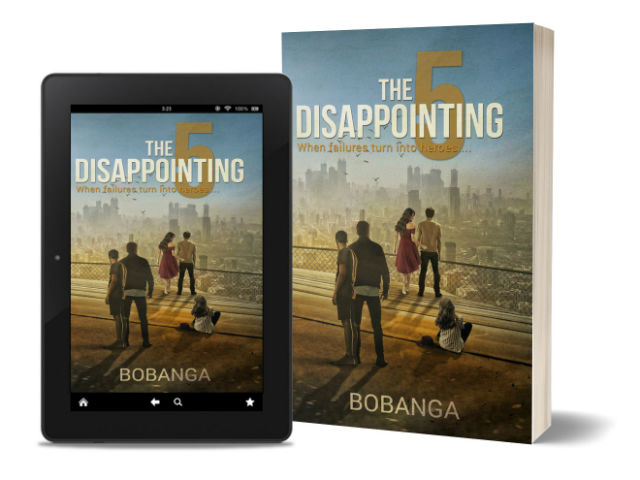 The Disappointing 5: When failures turn into heroes By Bobanga | Book Review

The book is setup around 5 teenagers (and their families and other people they come in touch with) who are having their last days in their school. They are having different characteristics and persona. And yes, the bond between them, which comes out as even stronger towards the climax, is a must mention.

Representing all these attributes on the cover page is a challenge. The designer has worked on it convincingly, as far as my opinion is concerned. Using caricatures for different characters work nicely. The backdrop reflects the urban environment and some elements of the story are represented by mixing them.

The cover page gives a feel of a book meant for young adults.

A moderately good cover page that may catch your attention.

Let us take a bird’s eye view of the story explored in – The Disappointing 5. The story revolves around Akash Malhotra, Bindya Shah, Dhruv Kapoor, Robin Alberto, Sunayna Mahapatra and people they are related to or came to meet them.

Two of the boys are best buddies. You offend one and you register enmity with the other. A girl is their close friend. And they often hang out together. Most importantly they study together. One of the boys is really good at sports and he is like a strong fellow, no one dared to mess with. He has anger issues. The other boy is not that stronger but is taking regular fighting lessons from the sportsman and is also strong in his own way.

One girl is good at study and the other is a good swimmer. Eventually, she also gets into making herself even stronger. A boy is having good charm and is excellent in his studies, he is nothing less than an encyclopedia when it comes to knowledge.

There is one other boy from their class who entangles with one of the girls.

Of course, there are some good and bad times for them at school and even with their families. It is all expected, as life doesn’t mean to be fair, always.

Their lives get a completely new direction due to a specific incident and that is the rest of the story.

While at the first glance, the title of the book doesn’t seem “catchy”. When you think over it, you will find it nicely thought out. The author seems to have focused on using negative aspects to reflect the positive things. You can find “Disappointing” and “heroes” mentioned here. The wordplay may remind you of “3 Idiots”.

What I like the most in the book are the strong characters. They do have their vulnerabilities and all, that makes them more human and real. But, they are not the ones who need to be taken care of as fragile stuff. Dhruv is strong and has anger issues and dominant nature, but his friendship and feelings are genuine. Robin is not so strong physically, but his intelligence has its own charm. Bindya and Sunayna are not the girls who need pampering and cannot deal with problems on their own. In fact, one of them even trains herself for street fighting. And, boys do support them.

Also, there are some adulteries and other stuff referenced in the book. The author himself says that he doesn’t advocate such behavior and it should not be followed. His disclaimer gives you a fair idea that it is meant for a mature (mentally) reader. Some key elements of the story cannot be discussed to avoid spoilers, but, the second half gets more interesting. When you start thinking it is all about teenage romance and family issues, you are presented with a twist and that makes the book a fantastic read.

I suggest you read Bindya’s detailed account of feelings and thoughts; mostly about how she found men are looking at her, like an object for carnal pleasure. Almost all females can relate to it. And, it is a guideline for boys and men about how to behave with the other gender.

The author is good at elaborating on characters through interesting lines:

Sunayana Mahapatra, the mother hen of the trio the annoyingly good bahu of the TV soap operas, the Hermione of the Weasels, the… were they weasels?

A girl’s response to one buy who proposed her, shows how strong she is, and how she doesn’t shy away from telling her heart.

“Are you even out of your diapers yet?” she asked. “Fine. You want to be a Romeo? Then do it properly. First drink poison and die.” A moment of silence followed.

A bright student’s feelings, when he/she despite all his/her sincerity doesn’t get his/her rightful due are presented quite effectively in the book.

… Never missed a homework, was always punctual, always aced my tests, and what do I get? get freaking outstood by “Miis Perfect” that’s what…

The author knows how to play with words and make some simple lines more effective. For example:

Thanks to his piercing headache, those knocks seemed like small grenades being thrown at his door.

Bindya stopped and look back. What else did she had to say? Her mother flung the martini glass behind her back. The crystal glass flew through the air and shattered into a thousand pieces. The shards reflected the sunlight and created a kaleidoscope of vibrant colours on the floor on the roof.

Here is a fantastic description of a scene.

Another strong breeze went past them. Bindya’s night dress fluttered elegantly. Moonlight reflected from her white dress, making her look ethereal. Her long hair blew in the wind making her locks dance along. They sometimes caressed her soft pale cheeks and sometimes kissed her soft full lips.

The characters in this book are mature comparing their age, in many aspects.

He knew how much that diary meant to his mother and he would never break the sanctity of her privacy.

And they are observant too.

She could see Akash was great will ball control. He could easily steer the ball and bluff his movements to confuse his opponents. But he lacked speed, and because of that he never played a striker…

In fact, the biggest twist in the plot occurs due to these observation skills only :).

The book has its own share of letdowns. Like many other Indian authors, Bobanga also used “Anyways” heavily. This self-published book has many proofreading and formatting errors, especially in Kinde EBook. Here are a few examples

After a while, she took a deep breath and retreated deeper intothe house to do…

I mean… sure, Iguess we can be…friends.

The other team
had already …

She took a deep puff from the cigarette before quashing it, and then pushed lhim on his back to straddle him.

Missing space after the punctuation mark. Some paragraphs wrongly aligned.

And you can even find some things that could have paid more attention on.

It is a nice book which cover shcool days, romance, family issues, social stigma and some other stuff in a balanced manner. I wish the book has better proofreading. Some stuff needs mental filtering and thus is for mature readers.

Previous: Ramayana By C. Rajagopalachari | Book Review
Next: A Big Ship at the Edge of the Universe by Alex White | Book Review