Ramayana and Mahabharata (Pronunciation: Ramayan and Mahabharat, respectively) are at the core of Indian (that is Bharatiya) culture. These are two of the most in-depth study of human behavior presented in the form of stories that can serve as the guidelines to humanity.

Rama (or Ram / Ramchandra) is considered as “Maryada Purushottam”, the ideal human being. You can see the perfect son/perfect brother/perfect husband (no doubt on that)/perfect son and more importantly the perfect leader/king; we have ever known of walking on the earth. That’s why the perfect social establishment (or kingdom/country) is referred to as “Ram-Rajya”.

The great thing about Indian (that is Bharatiya) culture is, the Gods can be visualized in any form and can be treated as a friend/son/brother/lover (in a gender unbiased manner). And, the tales can be retold/reimagined as per one’s belief and social canvas he/she is living in. It is the only culture where there is no single truth that has to be followed. Everyone has to explore their world/dharma through his/her own quest.

During these days we see a lot of re-telling and re-imagining of Indian classic literature. In this compendium of books, it is important to talk about those which are considered as to be the nearest ones of the most authentic copies of the original stories, as per the popular belief. In the same regards, we will be talking about Ramayana by C. Rajagopalachari-ji today.

Actually, Late C. Rajagopalachari-ji (aka –Rajaji) has taken this task with quite similar intentions. And you can find about how he decided to write this book in his words in this book.

As expected, this book has a traditional cover page expected from it. 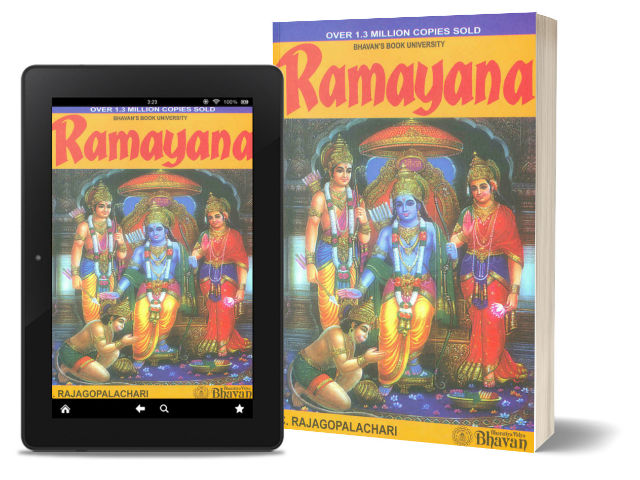 Lord Ram and Lady Sita are seen in their traditional court setup, accompanied by Lakshman and Hanuman. It is a very popular representation of Ram’s rule after he came back to Ayodhya after defeating Ravan. In another popular version of this photo, you can find them sitting on the throne. The yellow background makes the cover page much brighter. It is not very fancy or high resolution, but it is traditional.

The Book And My Thoughts About It:

The story of Ramayan is so intensely weaved in our culture that we all know it by heart. So, I will not reiterate the same.

One of the main reasons you should read this book is, as said earlier, it is the nearest one of the most popular version of – Ramayan – by Sage Vaalmeeki. I am referring it to the “nearest one of the most popular version” because in Vadodara, Gujarat, there is a library in MS University that has a collection of Ramayana and all the versions are considered as original. No one actually knows that which is the most authentic one. So, when we refer original – we refer – original as per the most popular belief. And, anyway, there can be some differences in all the versions, but the message they wanted to convey is the same. Selflessness, righteousness and making the society the best place to live in – are the key takeaways from it.

Some believe that Ramayana is a fiction. However, the proofs, evidence and poopularity of the tale even outside the continent re-affirms that it is an account of incidents that actually have happened. Even if not, then also, the message it conveys, is something one shouldn’t miss.

Actually, if you read the preface of the book, you get to know the reason it was attempted to be written and published by Bharatiya Vidya Bhavan. It says:

The Bharatiya Vidya Bhavan-that Institute of Indian Culture in Bombay-needed a Book University, a series of books which, if read, would serve the purpose of providing higher education…

Mythology is an integral part of religion. It is as necessary for religion and national culture as the skin and the skeleton that preserve a fruit with its juice and its taste. Form is no less than substance…

Actually, civilization or culture is meant to show the code of conduct one should follow to live a happy, prosperous and most importantly, a meaningful life. This is at the core of the Bharatiya culture. It is the civilization where all the natural elements are respected and prayed. You can see it reflected in this book at various places. For example, let me quote a few lines about Mother Earth…

All dead things-rotting corpse or stinking garbage – when returned to the earth are transformed into things of beauty such as fruits and flowers and the wholesome things that nourish life. Such is the alchemy of Mother Earth.

And, it is not only about goody-goody things. It talks bluntly about realities and the expected behavior with wrongdoers.

The honest, when they happen to go astray, should evoke our sympathy. It is however the way of the world – but it is right – to condemn in strong terms casual lapses of the virtuous, while tolerating habitual wrong-doers.

According to me, the most important reason to read this book is, the logical explanation and thoughtful evaluations of the incidents from the original Ramayana. Way back in those early days, Rajaji wrote about the misinterpretation of these ancient tales and warned against the half-baked conclusions. He clearly mentioned:

Some persons take pleasure in jumping to wrong conclusions from the incidents in the Puranas.

And, he goes ahead with an example:

They argue: “Raavana was a very good king. Vaalmeeki has falsely accused him of wicked deeds.” They ask: “Did not Raama act unjustly on a certain occasion? Did not Seeta utter a lie?” and the like.

Vaalmeeki could well have omitted incidents which are not edifying. Both Raama and Raavana were first presented to us by the poet Vaalmeeki. There was no earlier work referring to Raavana that can be quoted to contradict Vaalmeeki and stamp him as being partial to Raama, Seeta and the Devas, and twisting facts to deceive people.

Of course, we are expected to think logically, have our own persuasion and evaluate the things as per our belief. But, we need to have the proper knowledge and that level of maturity too.

The author, not only just re-words the tale, his comments and insights are really worth reading.

Vaalmeeki’s Raamaayana is the fountain source of the story of Raama; in it, one comes across seemingly wrong deeds.

Calm consideration of such situations would show that they are just portrayals of similar difficulties in our day-to-day lie. It is for us to benefit from the moral trials contained in them.

Such interesting lines suffered due to some typing mistakes.

As a reader, you will find it interesting to see how Ahalya’s episode is referred to in this book. As per the author’s interpretation, this episode is meant to convey, no mistakes are unpardonable. And, there is no fall from where you cannot rise. Actually, sage Vaalmeeki’s own life is a great example of the same.

The discussion about, “if the person was actually a God, why he/she should suffer like a mere mortal”, is interesting.

As Bhagavaan himself explains: “Whatever avatar I assume, my play must go through the feelings and experiences appropriate to that incarnation.”

The good thing is, the author has also referred to various other popular versions of Raamayana and referred to them as well. For example:

Kamban, the Tamil poet, beings the Ayodhya Kaanda referring to this marvel of how the King of Kings allowed himself to suffer the …

In Kamban Raamaayana also, address his brother “raging like the fire of Dissolution,” Raama says…

Some of the beautiful wordplays and thoughtful writings make it an interesting experience to read this book.

Vaalmeeki has filled pages with the tale of Raama’s virtues. The muni is never satiated drinking from the ocean of Raama’s qualities…

… In these passages Vaalmeeki uses the word daiva. In Sanskrit literature, daivam means fate. Daivam, dishtam, baagyam, niyati and vidhi are all words conveying the idea of something unexpected and inexplicable…

In the last segment, you can see how the author has elaborated the richness of the language and eventually moves toward why Gods called “Dev” and the difference between “Dev” and “Daiv”.

If you like classic English literature and writings with linguistic qualities, there are many fantastic segments for you in this book:

Then, like a huge tree felled by a forester with his axe, the King shook and toppled down and lay stretched unconscious on the floor in pitiful ruin.

The way, the human psyche is explored through the words uttered by various characters gives you an interesting insight into the human mind. It also acknowledges how brilliant Sage Vaalmeeki was.

…Not that I do not know that Bharata is the soul of righteousness in thought and conduct alike, and that he is devoted to you, but the minds of men are changeful and open to unexpected influences…

Kaikeyi’s mind was still uncorrupted. She had the culture of her noble lineage and was not easily amenable to low thoughts…

Many readers think that Sumitra and some other characters are not well-explored in Ramayana. Of course, it is the story of Rama (Rama-yana) and flows with him, but, it indeed gives due footage to the other characters too. It is interesting tind detailed scenes featuring Sumantra (the close confidante of Dashrath) and others. For example:

In the Raamaayana, Sumitra is a woman of few words and mature wisdom and great tact and infinite courage, full of faith, in whom “hope shines like a fame when it has gone out in all others”….

The book has some fantastic character defining lines exploring the conviction and beliefs of the character.

It is my duty to fulfil my father’s word. It is all the same to me, whether it is just or unjust, spontaneous or extorted by force of fraud…

Various conversations like “Raama calming Lakshmana…” and others are in-depth and not to be missed. A humble and genuine person needs to behave in the following way, and then I think the earth itself can become heaven.

Let us resolve firmly to change this sorrow into joy. That would be a proof of our nobility and courage,…

There are some interesting philosophical lines too:

Time is made up of a succession of tomorrows and one day is just like another. Inevitable sorrows do not become joys by postponement.

The book has many typographical and proofreading errors, especially in the Kindle edition that I read. It affects the reading experience.

Sunda at one tie incurred Sage Agastya‘s curse and died. Provoked by this, Taataka and Maareecha pounced on gastya who cursed them to be monsters living on the carcasses of men.

Other errors like like space before fullstop ( .), missing space after punctuation mark where needed, wrongly placed punctuation marks, misspelled words,… are also the downside of the book.

Also, you will notice that the names are spelled as per south Indian dialects. It, in no way, affect the reading experience.

Overall, a nice, genuine, thoughtful and logical interpretation of Ramayana. One must read it.