Posted by: Editor October 29, 2020 in Books, English Leave a comment

One of the everlasting effect of reading Joules Verne as a child is the affinity for science fiction. To imagine what human intellect and resourcefulness can achieve has literally no bounds. And as we seem to have explored the surface of the Earth extensively, for almost half a century now, humans have been fixated on the worlds beyond our home. The never-ending, ever expanding universe and may be multiverses are continuously featured in some of our best entertaining franchises including Star Wars, Star Trek and more.

But even before these, we had the books of Joules Verne, Isaak Asimov, Phillip K. Dick and many more such authors. Sci-fi and space odysseys still remain one of the best loved genres of books amongst readers young and old, and we are no exception to these.

We are always looking for new adventures penned by imaginative authors in the futuristic universes. Recently we came across the Salvager series by American author Alex White. The series contains the following three books:

I found the first book A Big Ship at the Edge of the Universe in audiobook format and genuinely enjoyed the listening experience. So here are my thoughts for fellow book-lovers on behalf of Team Thinkerviews…

The cover page features the vast blackness of space being invaded by a spaceship travelling through it, leaving a trail of fire and smoke behind. 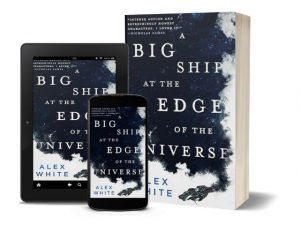 The cover page is a minimalistic black and white design with apt representation of the vast emptiness of space and the almost insignificant size of humans inhabiting it. Although the devastating and destructive power of our race is beyond question. No matter where we are, we seem to be able to find reasons to fight…

Nilah Brio is a young and extremely talented racer who is all set to break records and claim the most prestigious place in the world of inter-galactic racing. She loves her cars and her life, until one disastrous race that flings her in the path of a super-evil villainess called “Mother“. While Mother’s primary target is another driver Cyril Clowe, Nilah is the witness to this murder and hence cannot live to tell the tale. Nilah somehow escapes Mother using arcane magic, but she ends up in the strangest part of the world of Gantry Station, with no money and no friends. When she finally is able to summon help, it is only to find that her helpers are compromised and the whole galaxy is looking for her. She is supposed to have murdered Cyril.

And the only person that Nilah knows can provide some answers is Elizabeth Elsworth who sold Cyril the information that lead to his death. But Elizabeth Elsworth “Boots” has a lot of enemies, and one of them is Cordell Lamarr – captain of a marauder ship called “Capricious“. Cordell has come calling on Boots to get some answers of his own. Boots tries her best to escape, but ultimately, after a few thrilling chases, both Nilah and Boots end up as prisoners on the “Capricious”.

The crew of this ship contains:

Not easily, but eventually, the prisoners become part of the crew, so now they also have Boots, Her military grade artificial intelligence device Kinnard (Kin) and Nilah. While Nilah only wants to get back to her world on Taitu and get her name cleared, so she can continue racing, Boots sells the idea of pursuing “The Harrow” to Cordell. The Harrow was the biggest ship ever built in the universe and has been inexplicably lost right from its first mission.

It was the information pertaining to the Harrow that brought Boots to Mother’s attention. She burnt Boots’ office and murdered Cyril. Now she has managed to turn Nilah into a hunted fugitive and soon she is chasing Capricious. A space battle follows and the Capricious manages to escape to the world of Carre. Here, Nilah accesses her bank account and pays for the repairs required on the Capricious. She is captured by the authorities on Carre and is taken to Duke Thiollier, a fan and old acquaintance.

The respite is only temporary though, as Nilah’s enemies attack the palace not long after. Another thrilling battle ensues and Nilah and Orna barely manage to get back to Capricious with a comatose Malik. The crew has no option but to get out of Carre and try their best to hide from their pursuers. They eventually find the last known jumping location of the Harrow and arrive at Wartenberg Mining Colony.

What awaits for them here is beyond any of the crew’s imagination: prophesies and power, magic and mutiny, secrets and shadows. Unknowingly, they have stepped into the biggest secret in the Universe and their journey is far from over…

The very first thing this book reminds most readers of is Firefly. A sorely missed space adventure series that featured a similar set of characters on a ship that was busy with inter-galactic smuggling and adventures that took them to the far frontiers of the known universe.

But this by no means is a copy. The similarities end at a marauder ship with an eclectic crew. Being a book series, the scope of this saga allows for detailed drawings of the futuristic worlds where magic and mechanics are intertwined, where most humans are born with an ability to link to machines and artificial intelligence networks. How often do we say these days that the next generation is going to be born with electronic chips? There are glyphs and arcane power and then there are slingers and spaceships. There is just enough madness in people of this universe that still want to play at being gods and end up being evil beyond limits.

If you are a racing / speed car fan, you’ll love the sections where the author brings to life the formula one equivalent – the PGRF – world of racing. The cars, the drivers, the way they train, the psychic connection between driver and car, the prestigious race tracks, the neck-to-neck competition between drivers, the envy, the agonizing training schedules and the glamour. Alex White also shows us the corruption and conspiracies of this world, just like any other. Equally enjoyable is the world of space fighters and their battles fought and won by tooth and nail.

And while the machines and the AI do a lot of heavy thinking, what are humans doing? Same things we have always done it seems – a good life is not enough. Someone, somewhere has to be obsessed by power over everything in the universe.

I will return when the Stars have boiled away
And we are possessed of an infinite night
I will light the last lamp here:
The final act of the Creator
And then time will pass beyond all meaning..”

In quest for this power, nothing is sacrosanct. A whole planet is destroyed with no thought for its inhabitants and the galaxy is next in line. Even when the Capricious brings to light this conspiracy, nothing earth-shattering happens. The villains run and hide, the loot is divided up greedily and the lawyers get their share for nothing and life is supposed to go on – more or less in the same fashion. The author does a very good job of portraying the callous and short-sighted nature of humanity no matter how evolved we become.

The characters are all a treat. They are so much more powerful in the physical sense, with their inherent magic, and yet so vulnerable on the emotional side. They neither of them have any real family outside the Capricious and in spite of their differences and arguments, they do act like a family when facing enemies. Neither of them envisaged being where they are, but the vagaries of life have brought them together on this ship and by the end of this book, most of them decide to stay here by choice.

The language of the book is filled with futuristic things and expressions and the descriptions of places and planets will really delight the sci-fi lovers. I listened to this book through the Bolinda Borrowbox App and really enjoyed the experience. I could just see the courteous, old-fashioned Cordell, the Siri like Kin and the rest of the crew.

As usual, here are some of my favorite quotes from the book:

Every legend is a fluffy story wrapped around a piece of hard evidence.

If the world turned upside down twice, was something righted?

Magic came from the presence of life, and all magi got paranoid when they realised there wasn’t much life energy to draw from.

Racing is all about repetition, planning, training, simulation. But when I was out in the wild, facing down the threats we’d never seen, I couldn’t rehearse. I just had to do what was inside. If I flinched, I dies. If I made a mistake, I died. To drive a perfect lap, that’s easy. What I felt on the Harrow..it was the next level.

A gripping, moving, thrilling tale of the quest for the lost treasures and solving the mysteries. I am looking forward to read the next segment in the series. This is the book to pick up if you have a day or two to spend in the vastness of space…