When we think about armed forces (Army, Navy, Airforce and paramilitary-forces) we imagine the people who stand strongly at the borders to keep the country and countrymen safe and secure. And, their job function is not restricted to the border areas only. In any of the natural calamities, they are the ultimate saviors. More than physical strength and extended help of arms and ammunition, they require very very strong will power and mental strength.

But, there are even more aspects of their job profiles. There are opportunities provided by armed forces which most of us are not aware of. When we came across a book Shoot, Dive, Fly (with tagline: Stories of Grit and Adventure from the Indian Army) by author Rachna Bisht Rawat curiosity to explore the same caught us tightly. Once the book was available at quite attractive rates on Amazon (Kindle Edition) as part of book promotion, we grab the chance and bought it. The book remained in our kitty for long due to a very long queue of “books to be read”, how we’ve decided to read it out of turn. Fortunately our team approved it and I got a chance to read it :).

The book explored many other aspects of army and what an armyman/woman is entitled to do if he/she is qualified for the task. It is almost an unknown world, especially for regular readers, to explore. Here are my views and reviews for the same. Needless to say, as always, the views and reviews are uninfluenced by all means.

Of course, a book can not be judged just based on its cover page, but the influence of the cover page of the book in a remarkable number of purchase and/or reading decisions cannot be ignored. 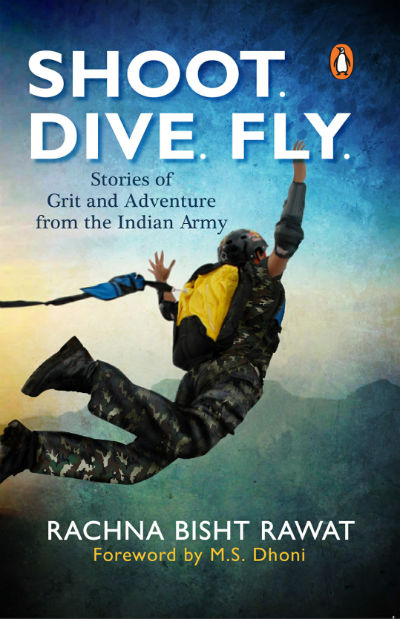 As you can see the cover page reflects the book title quite effectively. A para-commando is seen diving from height. The posture of the diver is able to irk interest in the reader for sure. It reflects all the qualities and attributes of an army commando. Sun rays making their ways from mountain range through a little cloudy sky reflects the spirit of army and commandoes quite effectively.

Rachna Bisht Rawat, the author, has distinguished the content of the book in 5 different segments mentioned below.

At the end of the book, you will find an additional informative segment How Do I Join The Army. I don’t think we need to discuss “what to expect in this segment?”, right?

The author has talked about various interesting and challenging extreme activities (including sports) some of the selected soldiers/commandoes go through. It ranges from conquering Mt. Everest to participating in bungee jumping, rever-rafting and other such extreme sports. And, but of course, it includes various shooting championships including participation in Olympic games! You may not imagine but there are special wings and quota under which the enthusiasts get a fair chance (that too while getting paid for duty). The cost of training/participation/equipment/transportantion/… are taken care of by the Army!

The book also explores the incidents where these commandoes need to work in very demanding and challenging situations. And, they cannot afford to make a mistake. It includes counter-insurgency operations, rescue operations,… you name it.

While it would be easy to talk about the incidents talked in the book along with the name of the soldiers/commandoes involved in the same, I would like to avoid all the spoilers. I want to add just one line here, like male soldiers, you will find incidents involving their female counterparts also.

The foreword for this book is written by M. S. Dhoni, an officer of the Indian Territorial Army and cricket legend. Actually the Indian army is respected for its qualities around the world, so frankly, it won’t make any difference. However, when a sports legend associated with a segment of army pens down the forward, it surely becomes interesting for the readers, especially the youth. And, the main aim of the book is to show the non-traditional career opportunities in Indian army. In that context, this gesture surely works in favor of the book.

Let me share an incident where the army troops needed to do a covert operation against some internal anti-social elements. They need to prepare for something unexpected. They need to swim for 7 kilometers to reach to a specific island in freezing cold weather. And they have a time span of roughly four hours to complete it successfully. You will understand the kind of preparation they need to do from the fact that they have rehearsed it 30 times! As there is no place to have a mistake! Here is a segment from the book in the same context:

It’s a dark night. The thirty-foot-deep Loktak Lake stretches out like an unending ocean, disturbed only by the soft splash of oars moving through the water. The narrow canoes, eight feet long, are making their way over its cold depths, each seating armed soldiers in driving gear…

The book also talks about a soldier’s posting at Amar, Siachen Glacier, the highest battlefield in the world. The soldier shares that when the army chopper took him there to drop with arms, food and other utensils and the firing and shelling from Pakistani post started. The pilots didn’t give it a thought and did their job properly, as it is a routine for them! It is such a terrific situation that we cannot even imagine by sitting in the comfort of our drawing-room or office. In a soldier’s words:

He tells me that big glaciers are capable of creating their own weather, and that why even though the weather department had predicted a sunny day, dark clouds had started looming large over their worried heads.

The book tells a lot about how soldiers need to prepare for a mission and what are kind of things they need to carry with them. When performing a trek in the Himalayas (or other ice-clad mountains) they need to carry kerosene and stove also. It is part of their “essentials list” in such cases.

A person needs to be fit but what matters most in the end is his attitude. A positive attitude helps you take on every difficulty as a challenge. It makes the difference between carrying on and giving up and often between life and death.

This “never say die” attitude is the best thing you can learn from the Academy. The book also shares an interesting experience of a commando who got a special permission from IB ministry to perform a stunt from a mobile tower. It would have been impossible otherwise for him if he was not an army soldier. Also, the way a soldier then go ahead to buy a “bat suit”, is simply an amazing reading experience. Also, the exploration of snow-clad mountains by females soldiers is something you don’t want to miss. It reminded me of some of the books I have read recently.

The book conveys a very important learning lesson from soldiers, especially when they come alive from a very critical situation. It says:

…When you face situations like these, you surpass your own limitations. …

This lesson is applicable in almost all the aspects of life.

The author also mentions some rather unusual operations army is called in. And, there come some cases when the desired results are not achieved despite the best efforts being put in. For example, a small kid fell in a borewell hole. The poor parents, villagers and authorities cannot do anything and ultimately the army troops were called. The rest is available to read in the public domain, but the way the efforts are done from the army men is something you cannot stop yourself from appreciating. Their work area ranges from the cold Kashmir valley to the burning hot desert of Rajasthan and Kachchh. And, they don’t have a luxury to get their bodies accustomed to the weather and surrounding. When they are called, they have to be in action! And, sometimes they find even dangerous situations amusing! Well, here is an example:

… Sometimes, we could get visits from black bears who would raid our tents and steal our rations but nobody minded since there was enough for man and bear both …

The author is good at exploring two quite opposite emotions in a single segment. Here is an example:

It never failed to hit me though just how beautiful Kashmir was and just how ugly the situation.

Here are some convictions of army soldiers. They believe in them and they live by them:

In war, every soldier prefers to carry ammunition over food since ammunition can make the difference between life and death, whereas it hardly matters if you don’t eat for few days.

My heart fills with love for these men who I know will always stand by me, even facing death. I know it because I would do the same for them…

To be honest, doing anything for the first time is always scary. The key is to be prepared, take every possible precaution and yet be ready for unknown situations.

Here are a few more books we got a reminder of while reading this one.

Another good thing about this book is the segment containing information about respective activities and the ways to join the.

The above quotes must have given you a fair amount of idea about the quality of the content and spirit of the book.

Overall an interesting book exploring the different sides of the army. It explores various ways an adventure enthusiast can think of to join Indian Army. It is kind of a university curriculum written in a very interesting way by marketing experts by remaining faithful to the truth.