As you know friends, we are always exploring new authors and their works here on Thinkerviews platform. We recognise the amount of hard work and effort it takes to write a book and publish it in today’s highly competitive world. And it also takes a lot of effort to make the readers aware of what you have published. Last year, we were approached by author Nupur Chowdhury with her first book. We read the book, liked it and shared our review as well as an author interview with Nupur on this blog:

Continuing on her writing journey, Nupur has presented the readers with her second book – The Brightest Fell.
We received a complimentary copy of the ebook, and here are our thoughts on it on behalf of Team Thinkerviews… 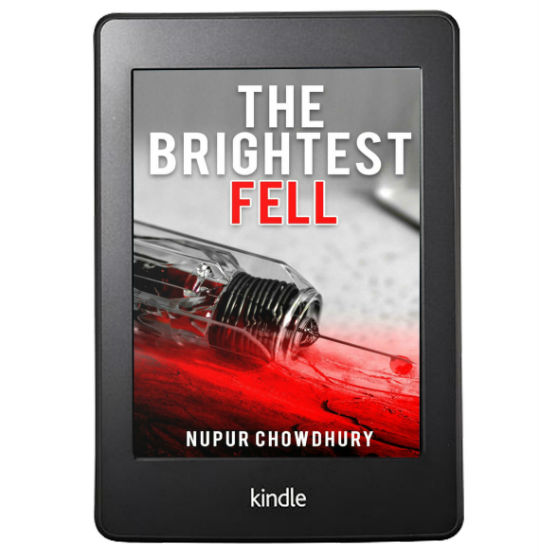 The cover page of The Brightest Fell reminded me of the typical paperback covers of the thrillers published in 80s and 90s.

As you can see above, the cover page comprises of a modest grey background featuring a vial of medicine with a syringe at the top oozing blood-red substance leading to darkness and violence. The cover page is in line with the central theme of the book revolving around a miracle drug, however, you make that connection only after reading the book.

The story has a lot of interesting ideas and characters which probably could be utilised to make a more attractive cover page.

The small island nation of Naijan is made of three Birhani states – Eraon, Birhan and Sien and Two Zanyar states – Ishfana and Zanya. In wake of a bloody civil war, the Birhani and Zanyar factions finally came to an agreement such that now the nation elects one Birhani and one Zanyar representative as their leaders for ten years, where they share the power and responsibilities for five years each as a Prime Minister. Naijan’s neighbour is Maralana, which is being ruled by ‘almost-dictator’ president Maganti.

When we enter the world of Naijan, it is reeling from the bomb-blasts in the metro system of its capital Qayit that left hundreds dead. This, however, was a terrorist attack with a much convoluted target then just innocent lives. Naijan’s Prime Minister Rajat Shian comes from a political family and also has a genius protegee – Jehan Fasih. An absent-minded but brilliant scientist, Jehan came up with a drug called Amven in his teenage years with an aim to curb the violence of human nature.

For fifteen years Jehan has been trying to perfect Amven such that it will make people less aggressive, more affable, more benevolent. But, he is still far from his target and the drug currently produces only passive obedience on its recipients. It is not the perfect scientific outcome, but there are other players in this game who find the passive obedience generated by Amven an effective way to control minds of people – from criminals to civil servants to soldiers.

The metro blast creates a lot of public pressure on Rajat Shian to clear the use of Amven on criminals during investigation. Jehan, however, cannot agree to this and so he decides to jump in the centre of the political arena. In a clever coup, he dethrones Rajat Shian and becomes Prime Minister of Naijan. He maneuvers Rajat’s most trusted and loyal supporter Ruqaiya to be his deputy.

And so the game begins.

On one side, the Shian family seems to lose not only their political prestige, but also their happiness. Rajat’s son Abhijat loses his army career and his daughter Ritadrija (Rito) loses her academic life. When they return to Qayit, Abhijat takes on the job of Jehan‘s chief bodyguard and Rito is offered a research position by Jehan’s best-friend Sinya Havall.

Neither of these are straight forward jobs of course as every character has hidden motives. Moving on as per his own game plan, Jehan manages to uncover a children trafficking operation run at a club called La Fantome misusing Amven.

Now he has a confirmed enemy in Rinisa Rayeek who has political as well as financial power to destroy Jehan. Matters come to heed when Jehan thwarts Rinisa’s plans to end his political career and manages to visit Maralana on a diplomatic visit. Here, Jehan forges an alliance with Maganti’s biggest opposition – his stepmother Ivanovna and her daughter Ludmila (Milli).

Not to be outwitted so easily though, Rinisa manipulates the Shians such that her elaborate operation results in capturing Jehan, Abhijat, Rito and Milli. With no hope of escape, Jehan comes up with sort of a plan:

But is Jehan clever enough to win this game with no allies and too many enemies?

Like Nupur Chowdhury’s first book A Flight of Broken Wings, The Brightest Fell is also set in an imaginary country and futuristic world which feels very much like our own, contemporary world and has similar problems. There are however no mythical beings here, just a miracle drug that makes up the sci-fi element of the book.

The political set-up of Naijan is intriguing in the way it balances the need of power for two prominent factions that make up the country. Although there is plenty of corruption, ongoing disputes and harboured resentments between the Birhanis and the Zanyar, the elected representatives of both the factions have to learn to rule together as each other’s deputy for part of their tenure. There may be no love lost between them, but a habit of working together sometimes can become stronger than a friendship.

I like Nupur’s descriptions of the times of civil war in Naijan which shows that no system is filled with perfect benevolence and it is difficult to distill the characterisation of any time into just good or bad. There are bad people in good times and good people in bad times. The systems are put in place with good intentions, but the results they achieve will be “mixed” at best. Some chaff will always get destroyed with wheat. And it might be all well for the politicians to call it ‘collateral damage’or say ‘Can’t make an omelet without breaking a few eggs, but for the people who get killed and/or lose their families and livelihoods, it is far from alright. What is sold as ‘greater good’ is oftentimes just personal greed / prejudice or perception of a very human ruler.

Most of the characters in this world are built on the familiar moulds and they do use slangs / expressions we would in our daily lives. There are enough interesting varieties of the names of people and places though to keep reminding the reader of the different world this is set in. Some of their attitudes towards relationships are reflective of times yet to come.

The author introduces some novel ideas and also gives us some perspicacious views on how she sees the cracks in the way our societies are built and function. No matter how much you try to educate, the instincts of most human beings overpower their logical judgement more often than not:

People are people, inherently vicious and murderous. They’re not going to be nice to you just because you happened to be born inside the same borders.

There is only one thing human beings understand, fundamentally. And its power. Everything else is the hogwash and fairy tales they feed you to keep you in line and keep the system going.

Some sick bastard might yet upload a video gloating over the success of their ‘holy mission’. Can’t please God without committing mass murder nowadays, can we?

The book has some elements of suspense and in general keeps a fast pace with witty, funny dialogues that show how pragmatic and cunning some of the characters are. There are a couple of idealists, but they do suffer more heartaches:

One of the drawbacks of decency was that it made you susceptible to other people’s opinions.

We have previously said how Nupur Chowdhury pointed out obvious flaws in plans of what we see in thrillers – be it movies or tv series. This is also the case here, when some of her crafty players manipulate the gullible ones:

Leverage. You needed leverage to get people to do what you wanted, when you wanted them to do it. The trick was to find it. For one man it might be money; for another it could be fame or pride; the desire for glory or the fear of rejection. It could be anything as long as it tapped into one of the two basic sources of human motivation – the desire to get what you don’t have or the fear of losing what you do.

Allegiance can always be fostered through a sufficiently healthy bank balance.

The only way to fight people who use your loyalties as your weaknesses is to give up everything that can be used against you:

The upside to having nothing is that you have nothing to lose.

Its oddly freeing to be able to do things without having to worry about what people will think, what the press will say, all that sort of crap. It’s great to feel so wonderfully anonymous…

As you can see from the above examples, the author doesn’t mince words when her characters are expressing themselves and so I would not recommend this book for young readers. It has fair number of curses and what-not. The author also creates some words that you wouldn’t find in dictionaries, e.g.:

Never underestimate the lethality of a self-righteous tool.

The accepted version is lethalness or deadliness rather than lethality.

I enjoyed the book. However, I did feel that with such an intricate background, this could have been a much more complex political thriller. The suspense part of the story feels a bit weak, as you cotton on to the future path of the central characters and their targets in first few chapters of the book. The characters are interesting but predictable enough for the reader to have an idea of the direction where they are heading. The book could have used a few more twists and turns to deepen the mystery element.

All in all, an interesting thriller set-in in the world full of intrigues. A recommended read for all fans of the author and all suspense thriller fans…

P.S. If we interview the author, we’ll definitely ask her why she chose the name “The Brightest Fell” for this book…

A Flight of Broken Wings by Nupur Chowdhury | Book Review