Posted by: Editor August 7, 2020 in Books, English Leave a comment

Enjoying the trilogy by Vineet Bajpai, we have shared reviews on the first two books in this series here:

The conspiracy theory was widespread, the characters mighty, the prophesied hour was here and we could not wait to get into the final installment to find out what the ultimate secret was :).
So, here are my thoughts on the final links in this chain of secrets:

Being the portkey to the virtual world explored within, the book cover is responsible for making its first impression. It does what a trailer can do for the movie. It should reflect the elements of the story and appeal the potential reader/buyer to go for it. Let us take a look at the cover page of this book. 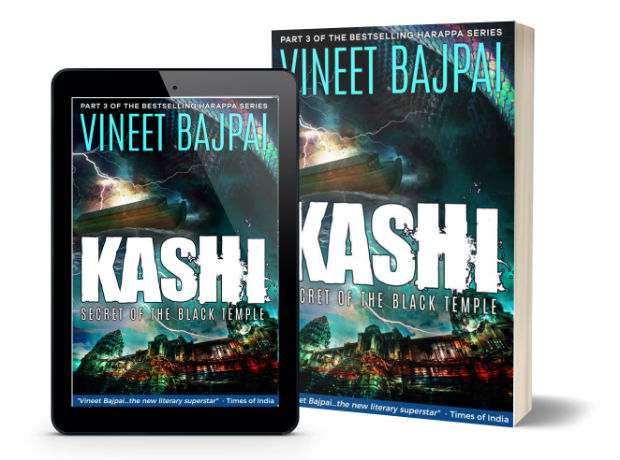 As you can see the cover page of Kashi: Secret of the Black Temple is designed interestingly. The city of Kashi (also known as Varanasi or Banaras or Benaras) holds a very special place in history. It is considered as of the most ancient cities which is still functional. Of course, the illustration of the city is shown in its full grandeur on the cover page. You can also see a mysterious eye is looking directly from the depth. Thunder is represented via lightning.

I like the cover page. It is not only attractive but also creates the desired positive impact.

In the modern day Kashi, the Dev-Raakshasa matth survived the battle with Trijat Kapalik, albeit with some losses. But, their problems are far from over. The messenger of evil – the most feared mafia boss of Europe – Maschera Bianca – The White Mask has come to Kashi himself to end Vidyut‘s life and quest. While Dwarka Shastri tells Vidyut the missing pieces of the New World Order story, including how Vidyut’s father Kartikeya Shastri was murdered, the enemy is getting close to them. The prophesied hour arrives and Vidyut learns the secret of the sacred scroll. He becomes the secret of the Black Temple.

In the world of now destroyed Harappa, Manu and his associates try to build the ark in this world that is already half under water. As if nature is not challenging them enough, the cannibalistic jungle tribes are now set upon killing them all and steal the ark for themselves. Manu’s human-ness is threatened again and again. And yet, he clings to Dharma. He proves himself worthy of the help of Matsya to survive Pralay. But, the inevitable is here. Kaliyuga has started and all will be lost in the violence of mankind:

It was a doorway. The only bridge of continuity. From the decaying, ancient world. To the new dawn of resurrection. It embodied a fierce contest between Armageddon at the behest of nature and the survival instinct of man. But despite the heroic endeavour, a lot was going to be lost. Eons of precious and irreplaceable wisdom acquired by the human race was not going to pass through this portal.

On the other side of Pralay is the world where man will wage war against one another, against mother nature, he will destroy the forests, dry up the rivers, poison the skies and spill blood by using weapons of mass extermination. In Kaliyuga, men will wipe out thousands of innocents, women, children. To feed the insatiable lust for a transient throne.

Back in the Dev-Rakshasa matth, the final assault is here – including Ninja warriors and modern weapons including blackmail. Vidyut can either save his loved ones or protect the secret of the Black Temple?

His destiny is here, but what price will he need to pay?

Being the last of the suspense thriller series, this book has a lot of pieces to fit as the reader gets a bit impatient after all the hype created for the final secret and the layer by layer revealing of conspiracies. The author once again includes many threads from the past to show how the series of black temples evolved with the final secret being stored in Kashi. The secret is unveiled and each reader will have to decide whether it is what they anticipated. My opinion is that the final secret leads to more adventures and yet another quest, so something to look forward to.

You know almost all the characters from the previous books with a few new ones that inspire reverence. The Devtas are allowed to make a few mistakes, and you’ll have to get used to those even when you know they have capacity for much better. At every point on this journey of vengeance, you want Vivasvan to turn back, forgive and follow the path of spirituality. But, that is not to be. And Vidyut stumbles a few times, but finally arrives where he is supposed to and embraces his responsibilities.

This book binds together the ancient civilisations to the modern through the recurring threads in human history and the tendency of humans to go around in circles in every era:

Harappa had well-developed trade relations with the Mesopotamian people, who in turn had commerce links with Egypt. Thereafter, religion emerged as the next social medium for unification. Buddhism and Christianity started to spread rapidly across large parts of Asia and Europe. But despite the flourish and the reach of religion, it was still not the number one consolidating influence. The greatest cohesive force by far was – conquest.

This is the book where we see the effects of the pre-historic curse by the saptrishis play out in the history of humankind. When Constantine created the New World Order, he had good intentions. But the problem is always the weakness of humans who carry the burden of execution of such monumental plans. When the members of such organisations succumb to greed, vanity and violence, they play with human lives. In this book, the Order is intending to cull the human race by killing billions of people. This idea has occurred in many discussions and also in Dan Brown’s Inferno. The conspiracy theorists already place the Spanish flue, the plague and even the current viral pandemic at doors of a few who believe in the culling of the population.

Here, the villains justify themselves by citing how within a century the planet will not be able to support the billions of humans infesting it and we’ll be at each other’s throats. But who is to live and who is to die? The rich and powerful of the world will live and the poor will die? This is such an ethical conundrum that no human should be in charge of such a decision. Hence, there is always a need for staunch supporters of Dharma whose actions are directed by the cause bigger than themselves and their personal feelings.

This book highlights the author’s views on Dharma once again when talking about the central theme of good vs evil in every age and why the Dharma is worth protecting in spite of the sacrifices it demands:

Hinduism or Sanatana Dharma propounds nothing but universal peace. It champions sarva-dharma-samabhaava or affectionate coexistence of all religions and faiths. It teaches the path of detachment and the search for Brahma, or the ultimate truth. It encourages the whole world to be one large, unified family when it pronounces Vasudhaiva Kutumbakam.

And yet Maa Durga beheads Mahishasur, Lord Krishna kills the demon Narakasur. Maa Kaali exterminates thousands of demons that emerge from the blood of Raktbeej. Lord Rama kills Ravana and Shiva destroys the Tripur demon. Indra vanquishes Vritrasur and the Narsimha avatar of Vishnu tears open the belly of the rakshasa tyrant Hiranyakashipu.

This is all to send one critical message:
Evil needs to be fought. Tyranny needs to be defeated. And if violence with an oppressor is needed to prevent mass violence against millions of innocents, then that is the path to be taken by the virtuous.

The author makes a case for why human should survive as a race. He re-iterates what is good in humankind:

Diversity is what makes humankind the supreme species of this planet. It is diversity that is the progenitor of culture, of ambition, of art and literature, of scientific progress, of economic aspirations and so much more. Without this rich assortment of different peoples, we would be nothing more than a vast herd of sheep.

What makes a stone so powerful? Or a shrine? Or a book or an idol? It is you – you humans! You venerate these lifeless objects and transfer your cosmic, collective spiritual energy by the millions for hundreds of years – and naturally, the stone become divine.

Below are the passages that highlight central conflict of this world in very few words:

Good and Evil, God and Satan, light and darkness…they are all creations of the same power that wants billions of human beings to suffer all their lives, bow each day of their miserable existence to their so-called God and finally die hoping to meet their maker? Is that what your God has to offer – pain, loss, tears, grief, illness…death?

Man was an expression of God on Earth. Man was an imp of the devil.

Is there a misfortune greater than a heart filled with unbridled ambition? What throne can be so bejewelled that its glimmer numbs the spirit to the pain and suffering of human souls? And how does it all end?

As you can see above, the book asks poignant questions and will leave the readers with a lot to think about and find answers in their own lives. The world seems to change around us all the time and not for better always. All of us must feel at times, what is the point of all this? The games humans play, do they mean anything, at all, in big scheme of things? Such questions lead you to find out answers in spirituality and maybe you may find that some of the thoughts expressed in this series of book matches with your own…

An enjoyable segment in this journey of Devtas and Demons, of good vs evil…