Author Vineet Bajpai enamoured the readers with his tale set in ancient land of Harappa and modern day Varanasi with his debut on the writing scene. The love of readers encouraged him to continue the saga in form of a trilogy with this second installment in the series: Pralay: The Great Deluge.
In some ways, second books are harder to write as the author now has a reputation to live up to and characters that readers feel strongly about. As the author says himself, the success of the first book in this trilogy ‘Harappa: Curse of the Blood River’, set high expectations for the second book. But he carried on writing the impressive tales of lives of Devtas (Half human – half God) whose rise and fall will change humanity’s future, as the world is nearing its end and the great deluge is coming – “Pralay Eeshyati…”

To recapture, the trilogy comprises of following books and you can read our views on the first book at the link below:

Now, Pralay is an ancient word and you may know that Pralay is the end of yugas in our pauranic stories. It brings an end to a corrupt world, so that the new cycle of creation can start anew. So you can imagine that this book contains the story of Pralay as it brings an end to Harappa.

We believe in the fact that “A book should not be judged (only) by its cover”. But, at the same time, we also recognise the impact of the cover page on potential buyer/reader’s decisions. If nothing more, it definitely urges one to look into the content of the book or to avoid it. 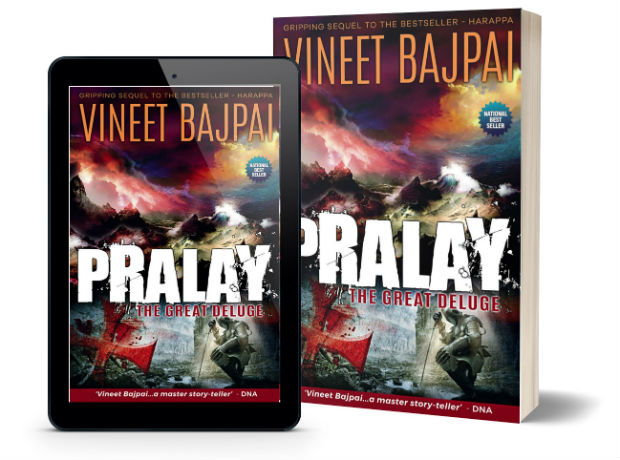 As you can see the cover page of Pralay: The Great Deluge is full of scary elements. Of course, it refers to a deluge, so finding blood red elements on the cover page is quite obvious. In bottom-right corner you can a warrior in full-gear looking very like Knights Templar. As the story in this part has elements from around the world, water/sea/ocean plays a major role. And, they make their appearance on the cover page as well.

A thoughtful cover page that is honest to the story explored, and appealing too.

We left Vidyut with some serious wounds at the end of the last book. Here, he recovers thanks to medical aid as well as his own super resilience. But, as he learns about an organisation called “New World Order” from his great grandfather Dwarka Shastri, the danger has moved even closer than they can imagine. Kashi’s most fearsome dark sorcerer Trijat Kapalik is at the matth’s doorstep asking for “Kapaal Arpan”. By the time he leaves, there is a dead body inside the matth. There is no other way but to fight him on his own ground. And so the Deva-Rakshasa matth brings a mighty attack on Trijat Kapalik’s den on the night of Amavasya. Events, however, are not in their hands as they discover that treachery is from within and one of their own will betray them. Trijat hangs Vidyut over a bed of burning coals for slow roasting death, while Dwarka Shastri ends up with knives at his throat.

In 1700 BCE, Harappa, Vivasvan Pujari is rescued when he is being taken back to the Mrit-Karaavas. But, even his rescuers are afraid of what they have freed. Sworn to vengeance, Vivasvan Pujari travels to meet Sura, the enemy of Harappa with an intention to bring his armies to Harappa. He succeeds in this, but Sura wants more than conquest over Aryavarta. He wants the heads of the Spatarishi. Anger, hurt and thirst for revenge lead to this unbelievable massacre where the dying Saptarishi curse not only the Surya of Harappa, but his entire bloodline as well as humankind.

Amidst all this death and destruction, the only ray of hope is in the tale of Manu. When we last saw him, he was riding to the black temple with the dead body of his mother and with arrows in his own back. With divine blessings, he survives. He meets his savior, his God, Matsya. Matsya tasks Manu with building the greatest boat the world has ever seen and fill it with everything that is good from this world that is worthy of saving and bringing to the new world…

The Great Deluge is on their doorstep…What hope is there for them to accomplish this mammoth task?

This book is a good continuation of the first book and does not disappoint on the thrill/quest quotients as the battles continue, and so does the unveiling of one secret after another. The layers are coming off slowly and the author expands the landscape to include Europe, America and weaves together the tales from the council of Nicae, crusades, Knights Templar, Illuminati and much more.

The author tells us a bit more about the New World Order in this book and how it was conceptualized:

Constantine aspired to leave the planet secure in what he believed was a governance and social order for eternity. He believed that differences in faiths and dogmas were the greatest threat to mankind. After decades of wars, bloodshed and conquests, after ruling over people of diverse cultures and civilizations, after observing the violent streak inherent in humans at very close quarters, Constantine had formed a firm opinion. The world needed to be controlled by one force, one supreme power – that transcended the borders and Gods created by quarrelsome societies and lustful individuals. It needed to be governed by a novel and perpetual order – A new world order.

His “New World Order” is behind all big historical events like the French and Russian revolutions, the worlds wars and lot more. As far as conspiracy theories go, it is quite impressive. And all this combined with dark sorcery, tantriks and kapaliks is enough to generate shivers and chills.

The old, beloved characters are here. But, there is also Manu and Tara aka Satrupa. And of course, Matsya. The descriptions of Sura and his way of life are quite interesting in how they denounce the language and teachings of Aryavarta and put a- in front of everything. For example, he calls himself A-sura, calls Vivasvan A-vivasvan, Brahman – Abrahman and so on. It is an intriguing premise to think about how some of these words have over time become new words in themselves and how their meanings have evolved over time.

The author highlights how the desire for revenge can cloud the judgement of even a Devta, and lead them to join hands with Asuras. It is heartbreaking to see someone so heroic and pure driven to madness and unthinkable cruelty. This book contains probably the saddest part of the saga as we witness brutal massacres and end of the harmony between nature and humans:

Humanity hold in the heart of every individual the potential to become a God. But, instead of seeking spiritual salvation within and without, human kind uses its gifts to betray, murder, plunder and avenge. This is the fate your species has chosen! So be it! The Gods will never release you from your hateful destiny. The serpents of violence and bloodshed will never loosen their stronghold on mankind, which shall kill and destroy each other in the name of the very Gods it has betrayed today!

The book is filled with many observations about how vengeance plays on human minds and leads to manipulation and violence:

How can a heart filled with hate and a mind poisoned with vengeance ever hope to have the universe on its side? How can blackened souls embarking upon violence against the unarmed and the innocent, hope to ever enjoy the favour of the creator?

This world spares no opportunity to manipulate a shattered heart and to exploit a defeated man.

When the Almighty pledges to destroy someone, it is by simply taking away the power of good judgement.

The author talks about the Sanatan Dharma – the Hindu way of life and its various aspects throughout the book highlighting its ideas like “Vasudhaiv Kutumbakam”. He also talks about how every religion carries the message of love and peace at its heart and yet humans are forever fighting in the name of religions:

All of us Indians should be focusing on uprooting poverty, illiteracy, malnutrition and so many other challenges we continue to face. But no! we are busy fighting each other based on caste, religion, language, state and what not.

Not only that, how we are focusing more on rituals rather than the meaning and power of those who follow the ancient practices:

Revered once as the sentinels of the moral code of living, sacred teachers for whom even kings left their thrones in welcome, these sadhus and rishis were now no more than emaciated, third-grade citizens living in penury. Segments of materialistic, westernized and irreverent society had abandoned these vital guardians to the dustbins of grih-pravesh, birth and death ceremonies. Unwanted essentials that had to be invited to perform the formalities many metropolitan Hindu families found to be nothing more than a tick-box.

The central theme is still the fight of good vs evil. That in spite of all the hatred and violence, the human core is made of love and hope and will even make a stand while facing the end of life as they know it. Although it is the Karmic cycle of destiny that is in charge all the time:

Nothing can stand in the way of destiny itself if it chooses for certain events to unfold as part of pre-decided karmic scheme.

Much as Man is dumbfounded by God’s profound conceptions like the stars, the galaxies and the constellations being the symbols of His divine workmanship, the greatest of the Lord’s creations is undoubtedly life. Magnificent, resilient…life.

I liked the following spiritual observations as well:

We are who we are destined to be – at all times, across all universes, beyond the limitations of human senses and perception.

Why don’t we learn to value what we have close to us? Sometimes what we pursue is not far away.

Perhaps divinity is no greater that its believer. One would not exist without the other.

The bedrock of this book is Matsya and how he inspires and leads humankind towards a better future. Without ever hiding the ugliness of the world around them, he chooses wisely and then stands by his disciples.

The book is quite enjoyable, if you accept the narrative as it unfolds and do not question the timelines too much. I should also have mentioned before that this series is not for the faint hearted as it includes many gory battle scenes, brutal killings and dealings with supernatural forces. The characters here – especially the Devtas – are pushed to limits beyond endurance and live through horrors unimaginable.

If you enjoy the suspense thrillers with questing elements, this book will entertain you just like the first one and make you look forward to the ultimate secret being revealed in the next instalment of the trilogy.