The historical/mythological fiction genre has gained popularity in India in last decade with a lot of brilliant books re-telling our well-loved legends. Some of these stick to the established versions of the epics, but provide insights and observations like Devdutt Pattanaik, while others re-interpret the epics with their own version of characters as well as timelines. Here, at ThinkerViews we have reviewed many such books.

One of the areas we have recently been exploring is the works around the lost civilisation of Sindhu-Saraswati – mostly known as Indus valley civilisation. There is no doubt about the splendour of these sites, but the script largely remains unsolved and hence, we do not have much literature associated with it. The handful of books that come to mind include Immortals of Meluha by Amish and also in historical fiction like Trade Winds to Meluhha by Vasant Dave. On the feature film – TV series front, there is the Ashutosh Gowarikar film Mohenjo-Daro.

We have had the trilogy in our Kindle collection for a while and I had the chance to enjoy a few days in this world on behalf of Team Thinkerviews. And here are my thoughts on it…

Being an entry point to the virtual world explored within, a book cover plays quite a significant role in influencing purchase/read decisions for the book. 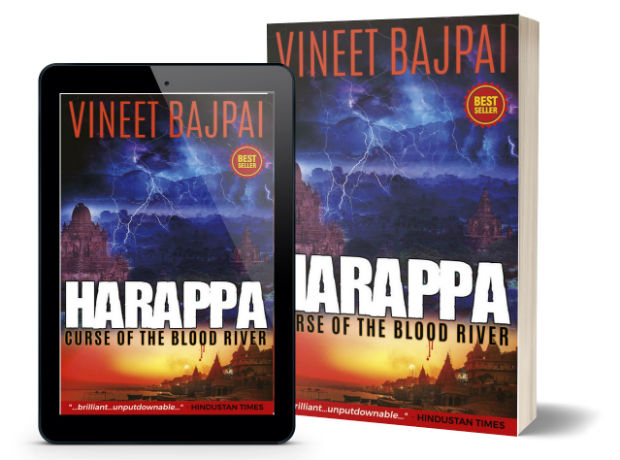 The book covers the canvas of almost 3500 years featuring Harappa in 1700 BCE, modern day Kashi and the after-effects of what happened in Harappa on the world from then to now.

We meet Vidyut, a dynamic, successful young man who gets a summons to visit Kashi to meet his great-grandfather Dwarka Shastri. This legendary chief of the 1600 year old Dev-Rakshasa matth has summoned Vidyut because it is time. Time when an old prophecy is about to come true and time for Vidyut to fully understand his heritage and accept his destiny that has waited for thousands of years. Vidyut arrives in Kashi and starts to learn about this from Dwarka Shastri. The loyal clan of Dev Rakshasa matth are excited to have their leader amidst them. Some of them include Purohitji, Balwant, Sonu and Naina. Soon though the opposition moves to Kashi as well and Vidyut’s life is threatened repeatedly.

In the bustling metropolis of Harappa, the power of Vivasvan Pujari is shining like a sun. Revered as a fearsome warrior, a great leader and the last Devta on Earth, his quest for enlightenment is almost complete when the Saptarishi promise him that he will join them when his karma is fulfilled on this earth. Destiny has something else planned though and Harappa receives its first shock in form of an earthquake that leads to their mother river Saraswati flooding a few villages and killing a few hundred people. The reding of Panchaang by Vivasvan Pujari‘s friend Chandradhaar indicates that within a few weeks their civilisation will end. This is all, sadly, going to come true as unbeknownst to them, Chandradhar‘s beautiful wife Priyamvada has engaged black sorcerers from Mesopotamia to blacken and extinguish the Surya of Harappa. She also poisons the water sources of Harappa to induce mass hysteria and madness. Her loyal army persecutes Vivasvan Pujari’s family until his wife Sanjana is dead and his son Manu is on the run with grievous injuries.

Shock, loss, grief and anger with unbearable pain means that Harappa’s most powerful son becomes its more powerful enemy. Burning with inhuman desire for Pratishodh as he announces:

Hear me one and all! Hear me you city of sinners! I, Vivasvan Pujari, the surya, will come back with devastating vengeance you ungrateful, bestial people of Harappa. I devoted my entire life in the service of this metropolis. And today you stone me like a rotten animal! Remember my words, you cruel harappans! My revenge will be as ruthless and as brutal as your collective conscience is today.

In a parallel track, we also learn about the efforts of a European force to gain mastery over the keepers of the ancient secret. The brutal killings of people of Goa in the 16th century by European invaders end with the sacrifices from the Shastri clan, but the secret survives. The British explorer looking at remains of the Harappa and Mohenjo-Daro, however, is not so lucky and is murdered by his own people.

All these threads must come together now as the prophesied hour approaches. The time is now for all these pieces to make their moves… and the saga to continue.

The book combines many elements of a good suspense thriller with an impressive collection of ideas and conspiracy theories, a wide and complex world involving prominent and historically well -known characters spanning over centuries and a quest for the burning secret that has been kept in dark for a few millennia. With the writing style of the book that reveals only tiny pieces as it progresses with layers after layers of information while always hinting at a big conspiracy in the background will keep the thriller lovers interested. With so many tracks, the landscape keeps changing all the time and the reader has an enjoyable exercise of joining the dots on their hands as they read. The book will remind you of the works of Dan Brown with its writing style, its secret that is linked to ancient religions, the mentions of Vatican and so on.

One of the main attractions of the book are the protagonists. Whether it is the mighty Vivasvan Pujari or the dynamo Vidyut, they both live upto the author’s description of them as Devtas – half Human, half God. They both are excellent warriors, proficient in knowledge of Vedas, practitioners of Tantra and exemplary leaders. But of course, when you create mighty characters, their fall is also mighty and have long term repercussions. Rest of the characters are there to support these two and yet Somdutt, Manu and Dwarka Shastri will also leave their imprints on the reader. Both Devtas have a perfect partner in Sanjana and Damini, the love of their lives.

The author gives us a good view in the metropolis of Harappa with its vedic way of living, its great Baths with gladiator like fights, its inhuman dungeons that form Mrit-karaavas, and the city’s great dependence on river Saraswati, which is literally the source of life for them. While the popular version of history was created by British explorers in the early 20th century, the author has a different view on this civilisation and it is worth thinking about. After all, there is a lot of unknown in archaeological expeditions as time and memories reduce a lot of evidence to dust. And the British desire to pollute our education system to induce inferiority amongst Indian nationals is quite well documented. This, the first book of the trilogy, gives us some clues to why all the knowledge of the lost civilisation of Harappa is hazy:

Harrappan people lived in the Indus valley region till a wave of united, horse-mounted, white-skinned and blue-eyed invaders from the West swept these lands.

The absolute dominance of one race over another, first needs the total submission of the ruled to the ruler. This becomes possible only when over generations the entire populace is made to believe that the rulers have the moral, historical and cultural right to be the sovereigns.

In the modern day world, it is the descriptions of Kashi that lift off the pages of the book with a life of their own. For example:

Just an inch below its horrendous outer skin, lie the most profound and the most spiritually powerful mysteries and philosophies man has ever known. It is quite like the universe in which we live – dark and cruel on its outside material crust, yet calm and immortal in its inner realm.

As you can see, this is a complex world and not wanting to give the secrets away, we’ll share with you some quotes from the book:

There is a hidden streak that God grants women, which has the power to change the world. Whether that is for the better of for the worse, depends on the woman who yields that influence.

The truth is never sold and marketed like lies are.

The book revolves around the struggle of humans when it comes to goodness, morals, faith and religion:

The blackest of depravity and the whitest of goodness, both reside in the same heart, suppressed or bolstered at the behest of the soul.

Dharma itself gets tarnished due to the vested interests of rogues who twist and misinterpret it in order to gain political or economic mileage.

Religion is a great cleanser, but it is also vulnerable to the dirt it aims to clean.

Scoundrels are not restricted to any one faith. They are born under every creed, every race.

The author reminds us repeatedly that the human desires for power or the appearance of it lead to bloodshed in every generation:

Every era would hear the shrieks of suffering millions, only to satisfy the insatiable hunger of one tyrant who wanted it all for himself.

The author also creates the world before – of the time when Humans were more in tune with nature. When the representatives of nature’s power and bounty were part of the human world:

The mighty Saptarishi were not ordinary sages. No one knew from where or when they arrived on the planet. No one knew what the purpose of their existence was. No one had an idea from where they drew their boundless power.

The book is very enjoyable as it sets the stage for calamities to come and doom and gloom to follow with misery that will last for thousands of years with only a slight glimmer of hope at end. And yet, it is an entertaining tale of valour, sacrifice and struggle of good vs evil.

No matter how potent and treacherous the forces of evil may be, they can never defeat the power of love, the supremacy of goodness.

There are a few typos in the book, e.g.,

But all in all, it is a sweeping saga with secrets that will keep you reading to the end and move to the second book pronto…