Posted by: Editor August 7, 2020 in Books, English Leave a comment

There was a time that all of us read Hindi literature with a lot of love, sometimes as part of the curriculum and sometimes because the stories had a flavor of real India that made a lot of sense to us and as our lives were back then. Then suddenly we had this wave of well-educated writers presenting Indian stories in everyday English that became a big hit with the young Indians working in the digital world and on its periphery.

But there still remains a significant portion of our life that could be read and understood in our home-grown languages and we are forever exploring contemporary Hindi writers around here. Here is a quick link to our reviews for Hindi books:

And if you are one of those readers who enjoy the fusion and transition between languages and stories overlapping one another then you would enjoy the works of Divya Prakash Dubey. We have explored some of his works for a while now including his blog and today we are sharing our thoughts on one of his most successful books – Musafir Café.

We bought the English translation of this book in one of the Kindle promotions and so found the book quite worth the money spent on it. Divya Prakash Dubey wrote the book in Hindi and it has been translated in English by Prerna Singh.

A dreamy landscape of setting sun in the background that highlights the silhouettes of a couple enjoying the evening and each other’s company over a cup of chai. The peaceful background also features a big body of water in the background with a jetty across it. 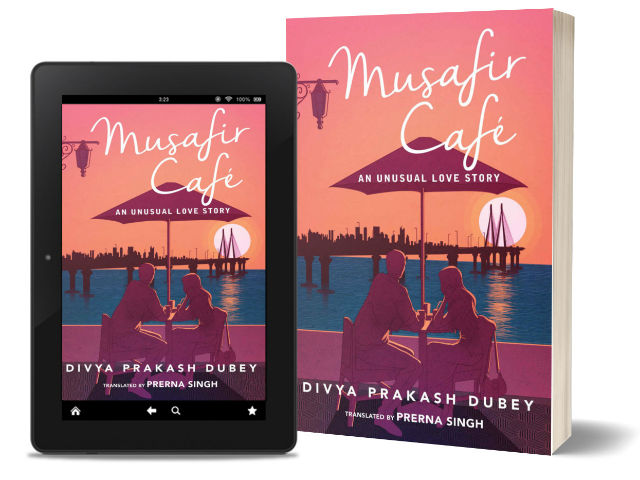 The colour scheme is attractive and yet serene. It highlights the almost surreal quality of evening when all of us feel a loss for the day gone by and anticipation for the night coming up. This location is not where the ‘Musafir Café’ of the book happens at, but the characters do explore their feelings on a beach a few times, so I guess it is not so irrelevant either.
All in all, an attractive cover page for the buyers looking for dreamy stories….

We meet Chandar and Sudha as they meet each other for the first time in a café as part of a meeting organized by their parents for their “Rishta”. However, Sudha does’t want to get married, so that part is sorted right away.

But as these things go, they do have a fair bit in common and strike a friendship soon enough. And one night, after a fight with her roommate, Sudha moves in Chandar’s house for a temporary stay that becomes long term. Days go by and as it happens in life, they become part of each other’s daily routine. But what about that elusive word love?

Chandar wants to get married, Sudha doesn’t. And that’s how it remains.

Sudha is a lawyer and deals with divorce cases on daily basis. Her aversion to marriage remains immovable – even when they go on a Honeymoon trip together, even when she meets Chadar’s mother and even when she becomes pregnant.

Frustrated with his own dreams and desires and unable to understand Sudha’s rejection of a marriage proposal every time, Chandar takes off on a journey that eventually brings him to Mussoorie.

Sudha lies to him on the phone that she has had to abort the baby due to complications.
Chandar embraces what life gives him in Mussorie and eventually realizes his long term dream of having a place filled with magical books and offering respite to all travelers – Musafir Café.

He is not alone here either. He has a partner in Pummy.

Ten years later, the past comes looking for him… What will they all do now?

So on the surface, it is a sort of love story. It features young people trying to make sense of relationships and find a way of co-existence that makes sense for them. They meet through traditional set-up, but soon end up in a different situation then would traditionally occur. The first meeting, the first attraction, the first steps towards relationship, the first fight, it is all here:

After a point, conversations lose their meaning, and people talk not so much to converse as to bide their time. The world hasn’t looked for new conversations for years; only the people on the different sides of the conversations keep changing.

And that’s where the book reveals another layer. It moves onto conversations about little things in life that we ignore to keep up with our mundane existence and following the path carved for us by traditions. Get educated, get a job, get married, buy a house, have children, get them educated and so on. In all of these, there is not much space for craziness or unusual dreams. We all have a very limited window in our youth, in our “starting the work life” days when we have multiple options in front of us. Once we join the race, the race takes over the life. And you might wonder many times, what is the purpose of this, what is it that I want to achieve with my life here.

Divya Prakash Dubey has quite a few observations about how we shape our lives through things that set us apart rather than things that make us fit the frame:

Life doesn’t have any meaning, you have to put one in it. Either with your craziness or with your dreams.

We spend our entire life worrying about earning something we have no clue about, and fail to realize what to sell and what to save.

Life is a secret that every generation keeps passing on without getting to know too much about it.

It is an interesting book as in it has the story-telling part and the parts where the characters talk to one another. It doesn’t always make complete sense – these dialogues. And as there are only a few characters here, these talks are also sometime repetitive. But there is a segment in the introduction where the author says:

The biggest price an author pays for writing a story is that he metamorphoses into a story himself. It is not an author’s job to put everything in black and white. Everyone who reads the book should keep underlining alongside. A book’s underlines are the ellipses the author leaves to the reader’s imagination.

Now this is something all of us do – isn’t it? Even here when we write about the books, we share the parts that we underlined and liked. Every reader gets something different out of the same book.

I did love the part where Chandar gets to live the dream that so many literature lovers have. Just a place filled with books and magic of story telling with no worries of making a living or looking after a family or buying property. It is, of course, life of a maverick and the society cannot function with only mavericks. The structures that humans have created for their social life will crumble if a large portion of the society did not have the aspirations that fit within its framework.

But the world of art and literature is more suited and is more of a place for mavericks and dreamers. These lost souls usually contribute a lot more towards improving the quality of our existence through questioning the status quo and charting their own paths into unknow territories. And although you may think of such existence as ‘passive’, it is the passion of such readers that keeps the links between our ancestors who are gone for thousands of years and the learnings and experiences they put in books to what we do today. The essence of life doesn’t really change, neither does humanity. We just all need to explore the same routes, make our own mistakes and arrive at a destination after we have faced many defeats and embraced the fundamentals of our existence:

The best and the worst thing about life is that nothing is meant to be forever.

A little bit of trepidation is necessary, because if you don’t get jittery while doing something, it either means that it isn’t important or its not worth doing at all.

Our real journey starts the day we lose faith in everything – the world, relationships, even God. And it reaches its end when all of those faiths come back and embrace us.

True freedom in totality means getting lost of your own free will.

Although the relationship – love and marriage- are central threads of this book – especially how the modern values are questioning the traditional ones, it is the philosophy of life itself that kept me interested in reading this book:

Love is a lot like this wet sand, no? you never get to know when it slips away underneath your feet.

The only difference between a book and lie is logic. The endings in books are logical. In life/ not so much. Those people who looks for life through logic, always end up with wrong answers.

Prerna Singh has done a lovely translation and the book is quite enjoyable in both languages. With its unusual love story, featuring slightly unconventional ending, the book is a recommended read for all literature lovers who feel lost at times in their lives and find it hard to fit in with the world around them. The book is a sort of reassurance that you are not alone. That a lot of people find life just as hard to understand at times as you do, and no matter how hard or foolish it may appear, there is no fixed formula that somehow works for everyone. We all need to find ourselves for ourselves:

The goal of life isn’t to reach somewhere. It’s to get lost, beautifully.

Did you watch the movie? Or Are you planning to watch it? Which part of the movie do you like the most? What is the most effective scene of the movie according to you? Is there anything you want to share about this movie or this article? Are you going to purchase it when available on DVD? Do not hesitate, go ahead and leave your comments below. And yes, do not forget to share this article with your friends over various social networks via Twitter, Facebook and others. And yes, you may like to subscribe to our RSS feeds and follow us on various Social networks to get latest updates for the site to land right in your mail box.

The Vine of Desire by Chitra Banerjee Divakruni | Book Review

Three Thousand Stitches By Sudha Murty | Book Review
2020-08-07
Editor
Share !
Previous: Kashi: Secret of the Black Temple by Vineet Bajpai | Book Review
Next: How much is too much – Divorce in India by Neha Mehrotra | Book Review