Chanakya is one of the most prominent figure from the recent history. His determination, will power and intellect is unparalleled. No matter how you see him, as a kingmaker, as an economist, as a chief minister and a great policymaker,… his contribution to the society is remarkable. Many consider them as the visionary of concept of a nation, in the context of modern history. People may love him or hate him, but as said, cannot ignore him.

We are fortunate to read a lot of work about him during our personal and professional journeys. Here are some quick links to the views we have shared in the respective context.

So, when we came to know about a book on Chanakya written by famous author Ashok K Banker, we added it to our kitty of books immediately. It, however, took a remarkable time for the book’s turn for reading to come. And, after reading the book, I don’t have any regret for the delay.

Being an entry point to the virtual world explored within, the cover page plays an important role in making the first impression of the book and thus influence many purchases and reading decisions. 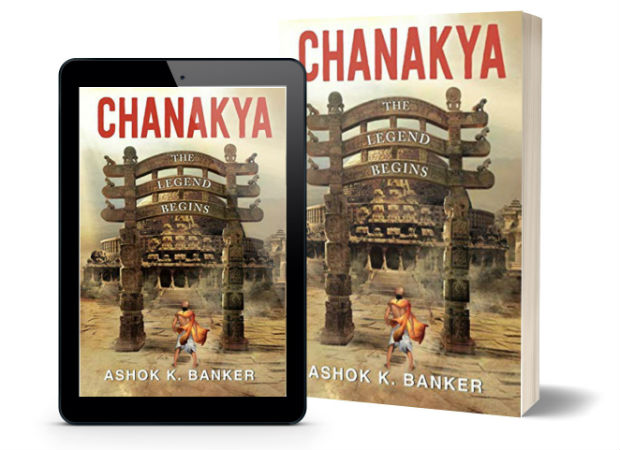 Chanakya’s roots belong to Pataliputra. At an early age he needed to run for his life and getting educated to Takshashila (Taxila), but he again came back to Patalaiputra and made it his Karmabhoomi. The name – Chanakya – forms a bold head with a long Shikha, a determined face on a healthy figure covered with humble white/saffron clothes, right?

The designer has tried to represent Chanakya and events of his life on the cover page. The book title is written on the welcome gate of the ancient city. The illustration is impressive and it surely is capable to attract potential readers.

The story starts with (the fictional) exploration of Chanakya’s childhood.

Chanakya, a brother to more than one sisters is nothing less than a child prodigy. He is blessed with a photographic memory. He is very playful and mischievous, like everyone else in this age. He is a little more mischievous than others though :). But, he never gives a chance to complain to his teacher. He not only remembered various scriptures by heart, but actually absorbed them. Yes, he can explain anything from those scriptures in a detailed, convincing and authentic manner.

Kartikeya, popularly known as Rakshasa, is Maha-amatya of Magadha king Mahapadma Nanda. He runs underworld with a tight grip and he adores nothing but the wealth. Everything from petty-crimes to big-loots consists of his share too!

Dhana, the crown prince of Magadha, is an arrogant and spoilt brat. He doesn’t think before shouting an order or committing an act. And, most of the times, they were all wrong. It is Rakshasa’s duty to cover up those crimes and clean up the mess.

Rakshasa is answerable to no one but the king. And, the king too, know that he is the best confidante he can every have.

Destiny plays its role and Chanakya and Rakshasa come into each other’s contact. Was it for good or bad? How the fictional story moves ahead from here can be explored by reading the book.

First thing first, this book is a pure fiction written around historical characters and places, and you need to read it that way. If you try to find authenticity based on the most popular research work and TV serials, you will be disappointed.

Contrary to exploration in this book, the characters of Chanakya and even Rakshas (aka Rakshasa) are quite different in all other popular reference materials. Rakshas’s original name was Katyayan (or Katyayana) contrary to the mentioned name Kartikeya in this book. Also, Vishnu Gupta’s father is referred as Pundit Gupta and their village name is mentioned as Chanak. Rakshas in all other reference work is mentioned as a man of honour and devotion. His devotion towards Magadh was impeccable and he was faithful to it. So, you cannot imagine him doing the wrong things and being associated with the underworld of the city. Remember, it is Rakshas’ character that Chanakya admired along with his wit, so much that he made him the Maha-Amatya when Chandragutpa was crowned as the Samrat. I am not sure if this fictional exploration is admired by a reader. But yes, you can compare with Amish Tripathi‘s retelling and reimagining works. If you love exploring Lord Shiva’s story or even Ramayana from Amish’s perspective, you can enjoy this one also.

The book, like all other works by Ashok Banker, contains many gems of literary aspects. Here are some of the oneliners from the book that you will enjoy reading:

You are a fighter, and fighters always engage, no matter the odds or their own condition.

But remember, when playing with emperors and princes, you must play by their rules, not your own.

The author is really good at exploring the psyche of the characters in his book. For example:

The simple fact of being born into their privileged position, the security and isolation that come with it, the sheer quantum of wealth, luxury, power and subservience that they were accustomed to from birth made them incapable of comprehending the realities of existence outside the Imperial Palace.

A prince can be born a prince and become a king without having done anything to deserve the title. But a minister cannot rise to prominence simply by being born a minister.

The book has some witty lines and light moments too. Here is a conversation between a couple, for example:

“But my beloved Vishnu’s father,” she said sweetly, “if he can’t use his great intelligence to get what he wants from life, then what good is it being so intelligent?”
He stared at her.
She raised her eyebrows. “Well?”
“You make a good point,” he said.
“Of course I do,” she said, smiling, “I’m Vishnu Gupta’s mother, aren’t I?”

Here are some character defining lines about Vishnu Gupta.

“He’s much smarter than all the other brahmacharyas,” Vishnu’s mother said in the other room to his father. “It’s only understandable if his mind wanders from schoolwork.”
“He is much smarter than even the teacher,” Rishi Gupta said as he settled in for the evening. “That doesn’t mean he should simply stop going to gurukul.”

While you can clearly see that Vishnu’s father acknowledges his son’s talents, he also wants him to follow the right path. That’s a lesson about good parenting. Here is character defining line for Rakshasa:

Rakshasa trusted no one, was friends with no one, loved and was loved by no one. It was the way he wanted it.

The author then carries forward the thought-process of the character as:

And, you cannot disagree. You can find an eye-witness can be made hostile and forced to speak wrong. The CCTV footage, on the other hand, show the things as recorded (of course, unless it is edited). Moving forward the author says the following about Rakshasa:

The vulgar displays of flesh, food and wine disgusted him. He was a strict vegetarian as his Brahmanical varna demanded, though the fact was that a few brahmins in high places adhered to those restrictions, especially in private.

Rakshasa would rather sit to dinner with a nest of cobras than dine with this group of smiling foreigners, each ready to murder everyone else if it would further their interests in even the smallest way.

The author is good at exploring attributes of his characters. Here is an example:

A short while later, Maha-amatya Rakshasa entered the palace complex, his tall black clad figure terminating conversations and causing eyes to widen, be averted, or to drop downwards at once. He did not stop to exchange greetings with any of the high Nobles or visiting royalty he passed along the way; he was not a diplomat or a courtier. Everyone knew better than to attempt to greet or interrupt his progress. They were content simply to let him pass before heaving a silent or overt sigh of relief and resuming their interrupted activity.

The following lines reflect the thoughts of an ordinary honest citizen. He is the building block of any big entity like a district or a state or a nation. And, the reflection of the thoughts of people in power to contradict the same will remind you of some such nonsense uttered by some political leaders.

Another soldier laughed. “The Maha-amatya isn’t bothered about your problems. If you don’t want to be robbed, hire bodyguards to protect your house.”
“I am an honest citizen,” the blind man said, “I pay my taxes on time, I have never caused any trouble. My two sons fought and died as soldiers for the Emperor, soldiers just like you. I myself fought as a soldier till I suffered the injury that cost me my sight. What were we fighting for, if not our great empire?”
One of the soldiers quipped: “You fought for the salary and the chance to loot and rape …”

It proves that the time changes, but, we still are able to find the same varieties of people, and probably we will.

The author also reflects the positive attitude of some optimistic citizens, who indeed look for something good rather than considering the entire thing as a bad one; via a character’s thoughts.

I would often hear tales of excesses, of corruption, of misuse of power, of injustices, but I always argued that some exception did not make the rule. I always tried to argue for the empire because I believed that to build a great empire, you must accept a few sacrifices. One does not throw out the entire fruit simply because of a single bruise.

You will like to explore the concept of Kosaghar in the book and maybe your thoughts might be different than the author’s. The author uses the word “boss” at more than one place, that seems out of context. Also, he mentions a Rudraksh mala and conveys it containing 1008 beads, while in a typical Rudraksh mala they are “108”. Devarshi Narada is referred as Saptarshi Narada here (in a popular context Narada was not one of the sapta-rishis; Kratu, Pulaha, Pulastya, Atri, Angiras, Vasistha, Marichi).

These quotes must have given you a fair idea about the linguistic attributes of the book and also a brief idea about what you should expect in the story.

If I have to choose only one quote from the book, I will settle for the following.

Many mistook a lack of response to be no response: that was not true. When someone wanted you to answer a question and you remained silent, you ere in effect refusing to answer. Silence become a form of resistance.

So, all in all, the book is linguistically good, has some characters are nicely developed, scenes are written in a detailed manner and has some thrilling moments too. If this is all you expect from a thrilling historical fiction, this book is for you.

A historical fiction where “fiction” is more emphasized. You need to read it with an open mind. I consider the play with historical character as a negative attribute and think that the author could have done much better.

Doomsday of Tamas: Race To The Second Apocalypse By Varun Sayal | Book Review