Home / Books / Chanakya In You By Radhakrishnan Pillai | Book Review

Chanakya In You By Radhakrishnan Pillai | Book Review

As per the Hindu way of living, there ultimate four goals one has to achieve in his/her life. They are Dharma, Artha, Kama, and Moksha. While many consider some of these goals better than others, actually all of them are equally important. The wise ancestors and Rishis gave almost a kind of code of conduct one can follow in the life to get the best of it. And more importantly, living a fulfilling life. It is very important to have a feeling of satisfaction and fulfillment. At the moment of birth itself, only one certainty is attached to the life; that is death. Wise men never considered the death as something scary or something to fear about. And the best way to look at it that way is to live a fulfilling life.

We are blessed with brains and the ability to think logically. Intelligence and knowledge are possibly the best things we can have in our armory. We can learn something from our mistakes. But, the better way to learn is from other’s experiences. Mankind has found a fantastic way to preserve and pass on the knowledge through generations. That is by documenting experiences and making them available to them.

In addition to our Rishis and sages, there are many wise men who walked on this earth who were more intelligent and possessed exception leadership qualities. If you look at comparatively recent history, one such man can be found in the same regards. A man whose documents are still relevant after thousands of years.

We are talking about VishnuGupta Chanakya (aka Kautilya).

He was a man who groomed almost a nobody (but had the potential within) in such a way that he became the Emperor of Bharatvarsha – ChandraGupta Maurya.

His books, Arthashatra and Chanakya Neeti are considered as a compendium of wisdom and practical advice which are beyond timelines.

Being an Amazon Prime member has its own perks and from our team, I am exposed to some of the fantastic books available to read for free under this program. Some of them are:

Adding to the same, I got a chance to read Chanakya in You – by Radhakrishnan Pillai. Dr. Pillai is a very popular and respected academician, author and person, especially for his immense research work on Chanakya and how much his teaching is relevant in modern times.

Being an entrance point to the virtual world explored within, a book cover (or for that matter, the cover page of any media) plays a very important role in a large number of purchase and/or reading decisions. Of course, one shouldn’t judge a book only based on its cover, but at the same time, one cannot ignore the first impression made by it. 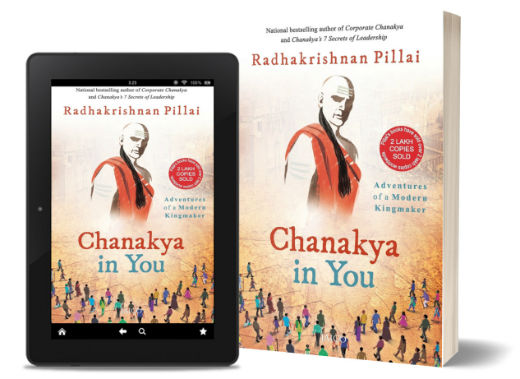 Chanakya In You By Radhakrishnan Pillai | Book Cover

Use of cheerful colors on the cover page makes it really attractive and yet it looks more serious than funky. I found it a balanced cover page.

A young boy growing up in a metro city with his parents is remembering his beloved grandparents, especially memories with his grandfather. He used to visit his grandparents during school vacation days and spent there best of his childhood days there. While his grandmother (very well educated and intelligent person herself) used to serve him fantastic delicacies, his grandfather was used to tell him and his cousins a lot of stories. His grandfather was a very learned man and he had a library in his home!

One day he was introduced to Arthashastra by Chanakya by his grandfather.

Time waits for no one and the good moments also come to an end. His grandfather met with his death! But, do the people we love and cherish in our memories ever leave us? Or they live within us? Well, the latter was true, specifically in this case.

He was engrossed in his studies and there came a time when he had given his final exams and have to decide the course of his life. He was not sure what he wanted to do in his life. And, in a moment of signal, he found his calling. His late grandfather seeded the love for books into him. And, he got a chance to retain the copy of Arthashastra with him after the demise of his grandfather.

It is going to play an important role in deciding the path of his life.

How his life takes various turns from this point and what happens to him and his family in the due course of life, is better to read in the book.

Writing a book that talks about a heavy topic like “Arthashastra”, which about administration and management of resources and wealth, applicable to all the areas of life; is not an easy task. Actually, the chances are there that the book becomes full of knowledge, wisdom and inspirational messages, but, a little heavy to read. The author did the job brilliantly here. He probably took inspiration from Panchtantra and other such stories and made the story a very easy to read and interesting in nature.

In fact, the first half of the book is explored like a children’s book then it gradually becomes an inspirational journey of a young adult which delves into corporate life and the protagonist ultimately reaches his old age. The way the author has elaborated the social canvas and the relationships from the Indian way of living, is among the best segments of the book. The lines elaborating the bond between the protagonist and his grandparents are so much realistic and interesting that they will remind their own grandparents or grandchildren to the reader. Here are some of those lines from the book:

There is a saying, “Why are grandparents and grandchildren close to each other?” “Because they have a common enemy in between…”

As a child I knew that with them around me, no one in the entire world would dare object to my pranks… not even my own parents.

In the very same way, the bonds between parent-child, teacher-student (i.e. Guru-Shishya), boss-employee,… are explored beautifully. Here is the line that talks about love which I like:

The best love marriage is the one that is arranged by parents.

The author tried to remain easy with the words and add light moments while talking about life-lessons, throughout the book. Here is an example:

If you have no evidence of age on your head, people will think you do not have anything inside your head.

The lines like the following make the young adults and kids to know more about Chanakya:

The intelligence of one man. Chanakya – had sent back one of the greatest conquerors the world has ever known with his tail between his legs.

The book explores spirituality too. As all the four ultimate goals of the life are interconnected with each other in inseparable ways, as per the Hindu way of living, it is obvious. Here are some such lines from the book:

Spirituality is man’s search for God; the search for the meaning of life. It is a journey from being ordinary to becoming extraordinary, to discover your huge inner potential and the ability to achieve the impossible. Yet, spirituality is about overcoming your ego.

The language of the Gods is silence!

The importance of education and sports both are explored in the book in a balanced and inspirational way:

We were the lucky few who were blessed with good education and so, we should read books. There are many children in the world, who do not have the privilege to go to school and therefore cannot read or write. …

The best way to develop strategic thinking is to… play games!

In any games there will be winners and losers, but both can be learners…

In fact, the protagonist keeps learning throughout his life. The book has some philosophical lines too:

It is when you mature, that you really grow up. Maturity is not about age, it comes with an understanding of life.

Sometimes you have to let go of something to understand it better.

Some of the life lessons come handy in this book:

Shastras have to be lived, not just learnt.

You may want to teach your children, but children should also be ready to learn from you.

It was not about what or who you had on your side, but how you used them that mattered.

In reality, astrology will indicate the future, but one has to create it.

The author keeps quoting some well-known and well-respected legends throughout the book.

The day the father dies, the son becomes a man.
-Swami Vivekananda

The author also conveys to respect the job (or the genuine meaning of source of income). As it gives the means to sustain ourselves and our dependables.

Never belittle a job; it gives dignity to many.

The analogy of “History” as “His-Story”, or the discussion about “Who is more powerful, king or kingmaker?”; they all ignite a thought-process in the reader’s mind. The author has talked at length about the differences between “Arguments and Discussion”, “Wish and Goal”, “Being worried and Being concerned”. The power of knowledge and books is one of the most important takeaways from the book. The book uses some terms like a “Noble businessman” which most of the people find contradictory, but, possible in reality. As Shri Narayana Murty said in one of his speeches, Money gives you immense power, the power to help those who are in need of the same (not the same words, but the heart of the message is something like that). I like the way the Gurukul is elaborated.

I like the way the bonding between the protagonist and his wife is explored. Rather than giving lectures on women-empowerment, the author has shown how the protagonist respects (in addition to loving) his wife through the way he addresses her.

There are many segments of the book I wanted to talk about, however, I have to make sure to avoid spoilers, as many as possible. The quotes from the book must have had given you a fair amount of idea about the quality of writing you can expect from the same. However, one thing I must mention: most of the characters of the book are nameless! Yes, you read it right? Never ever in the book even the name of the protagonist, his wife, his Guru, Guruma, Grandfather, Grandmother, the noble businessman,… are mentioned! Can you believe that a book with nameless characters is interesting? Yes, it is, in this case.

Some words like “satsang” are represented as “Satsangh” at places. Some minor proofreading stuff could have been taken care of, but on the whole, there is nothing major you can complain about, or found disturbing the flow of reading.

Here is an interesting video which goes in conjunction with this book:

Overall, a fantastic book which you should not miss reading. For us, it is the best value for money as we got it absolutely free for reading. It is the best investment of your time.

Doomsday of Tamas: Race To The Second Apocalypse By Varun Sayal | Book Review