The human mind is a very simple yet too complicated organ! Yeah, both these attributes contradict each other. While we should consider honest relations as our most prized possessions, we often fail to do so. Being an open entity we get a lot of input daily through our various organs, and it makes its way to our brain. All of us are not mature enough to analyse it perfectly and throw away the garbage. Often we do the opposite. And, that eventually harms one’s own self more than anyone else. Anyway, we were talking about relations. The most important attribute of any relation is faith/trust. When these soldiers can’t hold the fort, suspicion makes its way.

So can we call suspicion a curse?

These were the thoughts playing in my mind when our team has decided to give me an opportunity to read and review a book on the very similar theme. Yes, I am talking about Curse Of Suspicion by author Dr. Sujay Kantawala, an advocate by profession and author by passion. The book is published by Leadstart Publishing Pvt Ltd. We are thankful to the publishers for providing us the review copy. The review is personal and uninfluenced by all means.

While it is a well-known fact that a book should not be judged by its cover, one cannot deny the influence of the book cover on purchase and/or reading decisions. There is nothing wrong with that. We, by nature, get attracted to eye-catching stuff. 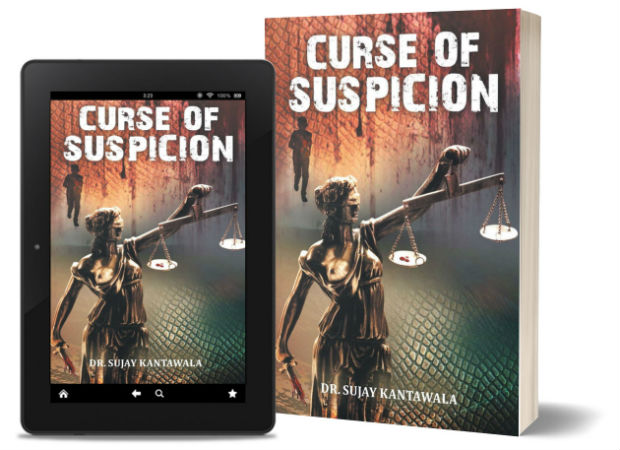 The book is focused on a court case (that leads to another court case) that talks about a murder mystery. The cover page reflects is quite effectively. The shades of “blood-red turning to brown to black” dominates the upper half of the background. The bottom half is lighter where you see a net. Lady justice is seen in front dominating the left half. Overall, an impressive cover page that reflects the book genre.

Duryodhan Singh is a celebrated lawyer in the city. His practice runs good and he is entered in moderately influential people’s list. His wife, Vasudha is a good singer and keeps performing with a group. It all started as a time-killing activity for her, as Duryodhan is quite busy with his office stuff. Eventually, she made it a prime activity. Duryodhan and Vasudha are not on very good terms. They have a teenage son – Satyajeet whom they call Jeet.

Since a while, Duryodhan started doubting that Vasudha has more than professional relations with someone from her music group. He used to monitor and scrutinize her body language during the concerts and programs.

On that day it was a very similar music program at an old age home. After the function is over, Duryodhan, along with everyone else went to his farmhouse at Boisar and the group had a good offtime there. Eventually, the group members left for their homes. Later, Duryodhan got a call from a police station as a person associated with a political party was arrested and some settings need to be done as the person has to attend a marriage.

Satyajeet and Vasudha were still at the farmhouse and the caretakers were there too. And, it was a kind of routine for them as the mother-son often spend their time there. In the dark of the night, a snake-charmer came with a “Kalotaro” and left it in Vasudha’s bedroom via a window. Satyajeet got a prenomination that something wrong is going to happen with her mother. And, he saw the serpent was overweighted by the sleeping body of his mother. He told the serpent not to harm his mother (yes, he has a rare ability to talk to them, remember Harry Potter!) But the snake eventually acted naturally.

Vasudha is dead now! And, Duryodhan was informed. Sudarshan, Vasudha’s brother think of a foul-play in this tragedy and suspected Duryodhan for it. Does Satyajeet also believe the same? What will the police find? The answers are better to get from the book by reading it, rather than talking about it. And on this journey you will meet Kamini, Madhav, Nirmala Vakharia and others.

Sujay (the author) is a well-known lawyer who is often seen in many panels in TV debates and is associated with some of the high-profile cases. He has seen many sides of the crime and though the book is fiction, it is quite possible that some of the incidents (mentioned) are influenced by some real crimes he came to know about. At the beginning of the book he disclaims the relations of the story or its element with any real incidents.

He actually mentioned the central-thought of this story as:

Suspicion, however grave, cannot take the place of proof. It is such a poisonous feed that it lands up ultimately killing and destroying oneself.

Strong characters, and the shades of grey in almost every one of them, make them real. I found that Satyajeet’s character is fragile in the beginning, stubborn in the middle and somewhat shattered towards the end. His actions during the climax might not be well-received by a reader. If rather positive shade was painted on this character, especially, in the last segment, it could have been better. Nirmal’s character on the other end, is very positive and remains throughout the same. It is how a citizen should be. If every element of the society behaves in the similar way, the world could have been a better place.

The way the function of the police department and the judiciary is elaborated (not in very depth) is realistic. The environment of the child-care home will make you emotional for sure. While the story is set in Mumbai, you can find references to various cities of Gujarat in the book. The author has put genuine efforts in elaborating some small incidents, which could have been left unattended without impacting the story. But, the detailed elaboration makes the book ever better. For example, the way the snake-charmer is used by a mobile shop-owner in a small village of Gujarat.

The book talks about something very important. The importance of relations. When you start ignoring relations, they start becoming liabilities. And liabilities are always on the “debt” side. When you are in a clumsy relationship, you cannot be happy. And it all starts with infidelity and suspicion. The author gets philosophical and says:

There is nothing in the world that can trouble you more than your own thoughts. We are all bad businessman; we create and carry our own excess baggage.

Moving ahead he says:

His suspicion had taken over the responsibility to bring out his evil and scheming side. “Bye Bye Happiness!”

I found some interesting lines about relationships in this book:

We always look for the ideal relationship – it’s a mirage imprinted in our DNA. The moment a good thing starts, the concept of possessiveness and insecurity takes over, and before you know it, the relationship is over.

Strong relationships are not built by forcing others to understand what you are doing for them but by giving them the confidence that you are sincere.

There is always a hidden message in the way someone treats you.

I would like to mention the realistic exploration of changing social canvas in India under the influence of western-culture. Nuclear families are the truth, especially in cities and metros. The way more and more old-couples need to live alone, away from the warmth of family is saddening. The author explores the situation of such people through simple lines:

At the far end of life, you realize that gone are the days when your returning home was eagerly awaited. You normally eat alone. If the TV was available, it would be your lucky day.

You can find sarcasm in the book:

A vigilant judge is a jewel in the judiciary.

The below mentioned line reminded me of Sherlock Holmes :).

An eye for detail… Elementary, my dear Sir!

The way the author makes his own lines by playing with some popular sayings is a delight to read. For example:

Assumption is the mother of all screw ups.

Here are some interesting one-liners I found in the book.

Ego never accepts the truth. Perhaps, that was why man invented laughter as he suffers so deeply.

Hard work actually puts you where luck finds you eventually.

But unlike people, machines can neither be tempted nor threatened.

The absence of evidence is not evidence of absence.

Loneliness can do strange things to a man.

A calm mind is the ultimate weapon to face any challenge!

“… right now, there is a crisis of confidence.”

Shoes or people – if they hurt you, they are not your size!

I like the way the love and affection between a father and a daughter is elaborated in this book. I cannot skip mentioning it:

Telepathy between father and daughter has the strongest wi-fi strength. Dads are normally wrapped around their daughter’s little finger.

The book has some sentences which could have been better framed.

I have also found that some expression sentences come without continuity. That could have been made better. I found that the fonts don’t remain uniform throughout the book, that could have been taken care of. Sometimes you came to find spacing issues between words, that affect your reading experience. For example page 73. Also, how can a lawyer with such good practice don’t have money to buy a home? Or, is he too much attached with the freely available property that he considers it a mammoth task to have his own, through his own money?

There are many other aspects of the book we can talk about, but I had to skip them to avoid spoilers. I have tried to avoid as many of them as possible. The quotes above will definitely give you a fair idea of the quality of writing and other linguistic attributes you can expect in the book.

I would like to conclude with very philosophical yet realistic lines from the book:

Nothing in the end belongs to us. Even the air we inhale, we exhale. Since there is no cure for birth and death, we might as well enjoy the interval between them. Sadly this is realized by most of us, towards the end only.

I found this book quite a good thriller where various elements are well-researched and the author has entered into the psyche of various characters, especially the teenagers, quite well (I consider it more difficult than the other stuff). The way the scenes are elaborated and detailed will amaze enthusiastic readers.

A good thriller which talks about an “error in judgment” and “the importance of trust in a relationship”. If you love reading thrillers, this book is a good choice. Of course, there are elements which could have been better, but it doesn’t affect the fun of reading.

When The Devil Whispers by Ajinkya Bhasme | Book Review