Exploring the modern take on Indian legends we have been reading Shatrujeet Nath‘s Vikramaditya Veergatha books and we have shared our reviews on the first two books of this series with you in past few weeks:

And now continuing with the series, let’s talk about the latest installment in the series: The Vengeance of Indra.

The cover page features a majestic figure holding a thunderbolt over a battleground – a brutal scene of carnage. 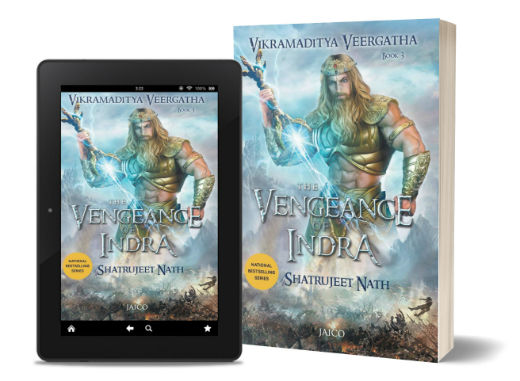 As you would imagine, the cover page reflects the title and the majestic figure is none other than Lord of the Devas: Indra, as he is described in the book:

Broad shouldered and heavily muscled, Indra had a luxuriant crop of golden hair and a luscious golden beard that came down to his chest.

The cover page is very attractive and fits in well with the cover pages of the previous books in this series. While the Indra on the front page is very impressive, we’ll let you explore the book to find out whether the scene of his vengeance, as depicted on the cover page, actually happens in this book 🙂 …

Continuing with the saga of the beloved Samrat Vikramaditya and his Council of Nine, this story takes us back to the city of Ujjayini reeling from the shocks that have generated from within the palace rather than without.

The Council of Nine is well and truly broken up with Kalidasa embracing his Huna heritage and leaving Avanti to meet His people. But, his leaving has also created a breach between Vikramaditya and Vararuchi, has left Shankubala heartbroken and Kshapanaka is resentful towards Vikramaditya for letting Shukracharya and Kalidasa go.

Outside Ujjayini, Ghatkarpara has been kidnapped by the enemies and it appears that Vaital Bhatta and the group travelling with him are hopelessly lost in the marsh of Aanupa. Amar Simha leaves Ujjayini in order to find and rescue Ghatkarpara thus leaving the Council of Nine shrunken to only a handful few.

The trouble in Magadha is only growing stronger as Shoorsena appears to have won over Harihara, the king of Heheyas and also gets the better of Pallavan, the diplomat of Kosala, who was trying to expose the truth about Shoorsena having murdered his own father. Shoorsena’s next targets are Odra and Kalinga.

And Shukracharya is hard at work within Devaloka to obtain more destructive power, while Indra has left for Ujjayini in accordance with the conspiracy at Meru. When Indra comes to Ujjayini and delivers his blow to Vikramaditya – that Vikramaditya is actually the son of Gandharvsena, not Mahendraditya – Vikramaditya’s world seems to shift. Indra claims that as Gandharvasena is his son, Vikramaditya is Indra’s grandson and a part deva and should give up the Halahala in favour of Devas.

Not only Vikramditya refuses to accept anyone as his father but Mahendraditya, he also refuses to subject his mother Queen Upashruti to any questions. And although Indra leaves, the city as well as Vararuchi now have doubts about Vikramaditya’s legitimate right to be the Samrat. Will this be the last blow to destroy the brotherly love?

In Udaypuri, things fall in place as Ghatkarpara’s friends figure out how to get him back. But Ghatkarpara himself has discovered his secret power. What is it and will it help him escape the prison?

Kalidasa has now embraced being Gaur Trakhaa and we meet and understand the Hunas, their customs, their shamans called droibas and their reasons to attack Sindhuvartaa. But, will they accept Kalidasa as their own?

As the tough times have dictated, Ujjayini has decided to go to the forest of exiles in search of allies. As Shankubala leaves to meet the Danavas of Janasthana, is there any hope of return?

At last, finally, Shukracharya has figured out what the bones have been saying. He knows where Halahala is hidden. As the Asuras prepare to charge Ujjayini, how will Vikramaditya fight him in absence of Vaital Bhatta?

A lot of literary works have talked about Vikramaditya and his Council of Nine: Kalidasa, Vararuchi, Varahmihira, Dhanvantari, Amar Simha, Shanku, Kshapanaka, Ghatkarpara, and Vetal Bhatta.

With so many impressive characters, the author carries on weaving an enjoyable web of interconnected stories that will keep you engaged with this world throughout the book. The admirers of this series will not be disappointed as this book carries on with the same complexity of the stage and multiple narratives that keep us interested and abreast of the adventures and actions of its multiple characters. Right from the starting action sequence in the Smashan of Ujjayini to the end, the book keeps up its pace and keeps the reader riveted as we move from one character to another.

We have tried to avoid spoilers so far and will do so now as well, but we will try to catch a few glimpses of Vikramaditya’s famous partner. The Vetal Bhatta in the Council of Nine is not the same as the Betaal of the widely-known stories. One of the most popular images connected with the Vikram-Betaal stories is the corpse hanging in the banyan tree, where King Vikram goes to answer his questions.

The Betaal in Vikramaditya Veergatha series is the ghoulmaster who looks after the place between life and death: The Borderworld.

Borderworld separates the world of the living from the world of the dead; a bridge, a space of transition. All dying things first pass into Borderworld, where they are tended to by the ghouls under the Ghoulmaster, who dispose of whatever is physical before sending the spirits on their way.

In this book, Shatrujeet Nath finally gives us a picture that would jog that memory from the TV serial/illustration of Vikram-Betaal stories, as Vikramditya approaches the trapped Ghoulmaster:

Rather he spotted the corpse, spread-eagled and strung from the tree’s aerial roots, tied at the wrists with thick vine. Suspended halfway up from the ground, it hung cold and motionless, like a grotesque offering to some cruel, hungry god.

While Vetal Bhatta helps Vikramditya in his liaisons with Betaal through his tantric powers, the Hunas employ shamans called Droiba who have intriguing ideas of creating zombie armies. And the supernatural is supported by intriguing spies from both Devaloka and Patala to keep Ujjayini a hot-bed of conspiracies. In addition, intricate plots are afoot in almost all kingdoms of Sindhuvarta, thus keeping the pieces on the chessboard moving with so many threads.

The characters come and go on the stage, but Vikramaditya has the most to lose and most to bear from all sides. He has grown more mature and sadder compared to the first book, but defeated he is not. He still hopes to fulfil his promises to all including his people. His courage in facing Indra, his refusal to subject his mother to questioning about her character, his hopeful quest for new allies in form of Danavas and his attempts to keep his family happy -all add to his character as the Great King of Legends.

As I have said before, the landscape of these books is so vast, from the great Desert in West, to the sea in East and Mount Meru in North to the Dandakvana in South. I like how Shatrujeet Nath builds the stage in only a few sentences both in terms of physical set up as well as the atmosphere. For example:

Though panoramic in scale, the Ghost Marsh was a study in monotony. It sprawled in every direction from the foot of the hill, a drab and limitless landscape wreathed in drifting curtains of mist with clumps of mossy forest and pools of shimmering swamp visible in the gaps in the mist. The marsh dwindled into a rising steam of haze, and haze and yellow-grey clouds merged such that it was impossible to say where the earth ended and sky began. Colour had leeched from everywhere, leaving behind lifeless greys and splotches of dull green.

Night had woven a tight cloak around the palace, smudging the contours of its rising domes, balconies and terraces, so it was difficult to tell where the night ended and the palace began. Even the lights dotting the palace windows seemed to shrink and withdraw in deference to the darkness, while the torches lighting the causeway were pale halos of uncertainty, their reflections undulating like ghosts in the lake below.

We have a few new characters in this book, but it is more the story of understanding the reservations, limitations, prejudices and long-held resentments between the close-knot Council of Nine. These are no different than what surface in every family and long-term friends, but because these powerful people also have to fight formidable enemies, even small troubles are harbingers of big consequences. On the positive side though, as they are all being tested on personal front, they are also discovering the potency of their newly discovered powers. This balance makes this an enjoyable adventure story, rather than a tale of gloom and doom all around. And amidst all the action, the book is also filled with astute battle quotes :

The demands of war may look unreasonable in times of peace, but the willingness to meet those demands determines whether one ends up victorious or vanquished.

What is justified and what isn’t are points of view.

If we sow seeds of blood, we must be prepared to reap a harvest of swords.

Although there is action aplenty with swords and shields, there is a lot of focus here on the internal struggle of the characters and how they judge one another’s actions, the author also gives us many candid thoughts on how we behave towards people we love:

Between the reluctance to say and the hesitation to understand, precious moments are lost.

The pariah’s hurt – the hurt of rejection – of being misunderstood by your very own, of realizing that no matter how selfless your motivations are, your decisions will be questioned, and your actions will be judged.

One cannot expect to be forgiven just because one is suddenly repentant. That would be too convenient. There is a price to pay, and part of the punishment is not knowing when…if one will be pardoned.

And the words of those having loved and lost:

Why do young people not think before falling in love? Why can’t they see the pain that they are inviting upon themselves? Why does love hanker for so much sorrow and punishment? Why is love so foolish?

Vikramaditya lives on in people’s memory as the kindest, the Pardukhbhanjan King who would do anything to help his subjects. Following words from the story say it all:

We thoroughly enjoyed the book and if you go for Kindle edition, which is not too pricey, you can also look forward to 5.5 – 6 hours of this adventure-filled voyage…

We are looking forward to the fourth book in the series: “The Wrath of the Hellfires“… We’ll definitely share our views here on it when the book is released for all the readers who enjoy Vikramaditya Veergatha…