The best perks of being a book lover and avid reader includes getting exposed to new talents. Recently we’ve found an interesting book on Amazon – MiЯЯЯo: at THƎ WƎIЯⱭ WAYWAЯⱭ. It is written by debutante author Manoj Kumar Sharma. The way the word Mirror is played with in the title (showing the word alongwith it’s Mirror image), is quite interesting.

When the book was available on Amazon during an offer period (for Kindle version of the same), we’ve bought it. Though, we have a very long queue of books to read and reveiw, this book somehow kept catching my attention and ultimately I have to ask my fellow team mate to let me read it out of turn. Fortunately, we were able to work it out that way, and I got a chance to read it :). Here is my unbiased review for the same.

We, at ThinkerViews, strongly believe in not judging a book (or for that matter, any media) by its cover (only). But, at the same time, we recognise the influence of a well designed cover page in purchase and reading decisions. And as I have mentioned earlier, in this particular case, the cover page has attracted me towards the book. 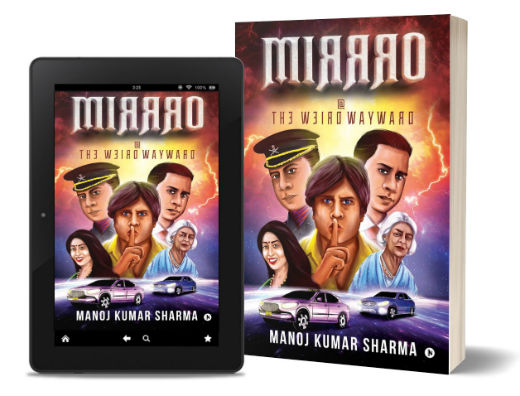 As you can see, the cover page is designed with the use of cheerful colors and is quite attractive to the eyes. The way the “mirror effects” used in the title and the tagline, are quite interesting. They are designed to attract the readers, successfully. I like the cover page. It reminded me of the same of Barbarika by Hariharan Raju.

It is a new year’s day (according to the Gregorian calendar) in the future, and most of the people are still within the comforts of their bedroom as they retired late last night. The morning of the new year is expected to come with new hope, new opportunities, and new plans about the future. But, it all started with a tragic mishap at a factory. And, it is not just any other factory. It is one of the biggest distillery plants in the country. Somehow fire was cracked in the plant and “the best in the world fire fighting mechanisms” installed in the plant which were to automatically take care of such situations failed mysteriously!

Another day, another tragedy! One of the biggest plant in the country dealing in cigarettes business caught with similar kind of fire-mishap. And, again the world-class fire prevention and fighting systems installed there failed mysteriously!

Every day, similar incidents started appearing on the newspapers and news channels. Seems the new year started to see bad things only!

But, one news is quite different than all these? A rape-offender is found in the trash and there was a sex-change operation done on him. So, he is no more “he”, but became “she”!

How are such mysterious things happening? Is some group putting in efforts to clean the kind of evil from society?

Well, you need to read the thiller to know more :).

The book consists of 4 chapters (each have various number of parts) mentioned below:

The book starts with a fantastic plot. Actually the entire first segment is so gripping that you will be glued to the book and will want to complete reading it without any disturbances.

The author has put many things in the books that look very passive and you may just read and forget, but actually have deeper meaning. For example, in the first part of the first chapter, the things start as:

Look at the name of the city. While the incident mentioned is taking place in the future (almost 10 years from now, but the ancient name of the city is mentioned. You see that with a change in the political discourse, the names of the places are changed. Calcutta became Kolkata, Bombay became Mumbai, Madras became Chennai, Allahabad became Prayagraj,… and so on. In one way, people trying to finding the roots as per the ideology of the winner. A hint to such subtle change shows, what else you can expect in the book ahead.

In fact, the first chapter of the book will refer AI, advance techniques and many other such elements that give you a feeling of reading a sci-fi novel. The author has done enough research to explore the setups of various plants convincingly. That is a plus point of the book.

Apart from the technical conversations and explanations, the author is good at exploring the scenes from human perspective too:

All the staff of the plant irrespective of their duty or timing gathered at the main admin building’s ground floor assembly hall, praying and consoling each other. Their thirst, hunger and sleep also seemed to be burning in the fires.

I like the way the book has explored the different mindset of the company owners with changing generations. The book elaborated it quite realistically:

… He was a very close associate of Mr. Girish Roy, the father of Victor Roy. But Victor, the 35-year old new owner of the company, didn’t have too much respect for the veterans. He had the peculiar notion that only people with inabilities remained with a company for so long, for the sake of long-lasting stability and security, whereas people with a high level of competency were loyal to their own doctrines and kept exploring challenging spaces.

Also, at the end of the chapter, you will find a summary of the incidents explored in the same, from a neutral perspective. You will definitely love to read those small segments.

The coverage of such incidents by media in general (including print and TV both) is explored very realistically and interestingly. While reading about the debates going on various TV channels about the incidents, the conversations, the behind the scenes information, the arguments, the shouting anchors,… everything is up-to-the-mark. And yes, the author doesn’t shy-away form using words like “TRP hungry” :). And yes, you will find references to “Nirbhaya case” and other such tragic incidents too. Actually, the way one of the protagonists and his family, along with the family of the victim of the story fought with the system, the police, the judiciary will remind you about the frustration and anger we have seen in such recent tragic situations. The discussions and debates about banning liqueurs, tobacco, cigarettes, drugs, and other such stuff are quite logical. The author bluntly says:

… Moreover, illegal production of alcohol takes place in the prohibited parts of the country, again with the blessing of the current system. …

Another issue the book explores quite realistically is about “ragging” in the hostels. The way it ruined the careers and lives of many aspiring students and affected their families and ultimately the society in the wrong way; is explored in a very long segment and in a very detailed manner. Reading this segment and seeing its effects on the life of the victim throughout his life will make you emotional and heavy. It justifies a rather fragile and vulnerable personality of one of the protagonists. Of course, the protagonist’s falling from the path repeatedly will not be admired by the readers at all, but, the roots of the problem are well-explored.

The book has some hard-hitting lines which touch a reader’s conscious:

… When doing business with others, everything is fair. But when the same business touches your near and dear ones, it becomes unfair. This kind of double standard is the core reason behind the arson in liquor factories. ..

The book has some nice one-liners too:

Human beings did lose their control in a state of panic!

One must use one’s intelligence and wisdom to weigh the pros and cons and foresee situations and decide accordingly.

One must also possess an impeccable fighting spirit to face any kind of adversity and survive in any tough situation.

While I am trying to keep the spoilers away, some of them are inevitable. The quotes above must have given you an idea about linguistics and literary attributes of the writing in the book. There are many characters in the book including (but not limited to) Jiva Jeevan, Venkat Naidu, Girish Roy, Victor Roy, Aryan, Riyaaz, Apeksha, Naresh Singh, Pradeep, Dhan Kumar, Indo, Devi,… The author has tried giving justice to all of them. The strongest character of the book is an old lady who had participated in freedom struggle too :). This is real feminism or gender-equality. The way she carried out her life and remained a rock-solid support to her near and dear ones is simply impeccable.

From the second chapter, the book becomes a psychological thriller and has a ride with small bumps. Some segments get too heavy (in terms of emotions and negative aspects). So, the book has its own letdowns too. But, on the whole it is a good thriller with some fresh and imaginative elements.

I am deliberately skipping mention of various other characters, incidents and attributes of the book avoid spoilers.

A sci-fi turned psychological thriller that talks about the dark elements of the society and the system and comes up with fresh imaginative ideas to deal with the same. Various aspects could have been better. But, on the whole, it is an interesting reading experience. Not for the light reading.

A Man From Mandu by Manoj V Jain | Book Review