We’ve shared it many times but we want to reiterate it again that: One of the best perks of being a professional book reviewer (that too, associated with Team ThinkerViews) is getting exposed to some new/unknown/lesser-known talents which are (often) far better than some of the bestselling authors.

Today we are sharing our thoughts for Ashvamedha: The Game Of Power by author Aparna Sinha. Be bought this book a long ago and it stayed in our “to be read and reviewed queue” since then. Finally, from our team, I got a chance to read it and I am delighted that I got this opportunity. Here are my personal views and reviews for the same.

Ashwamedha refers to a yagna (known as horse-sacrifice in English), where the host of the yagna (yajna) left a horse free followed by a massive army. The horse is free to wander wherever it wants. The land where it goes comes under the ruling of the host. It the owner of the land (or state/country) do not want to accept the host as his/her superior, he/she can challenge the host by capturing/stopping/tieing the horse. The powerful army followed by the horse will then fight a battle with the challenger and force him/her to accept the superiority of the host. If the challenger defeats the army of the host, the yagna remains incomplete. The reference of this yagna are found in many ancient Indian scriptures including Ramayana and Mahabharata amongst others. But, is this definition applies to the story of the book? Let us check. By the way, the reference of Ashvamedha Yagna first appears at around 36% of the book content.

Being responsible for creating the very first impression of the book, the cover page plays a significant role in a large number of reading and/or purchase decisions for sure. Of course, we cannot judge a book solely based on this attribute, but, we cannot ignore the influence of the same as well. 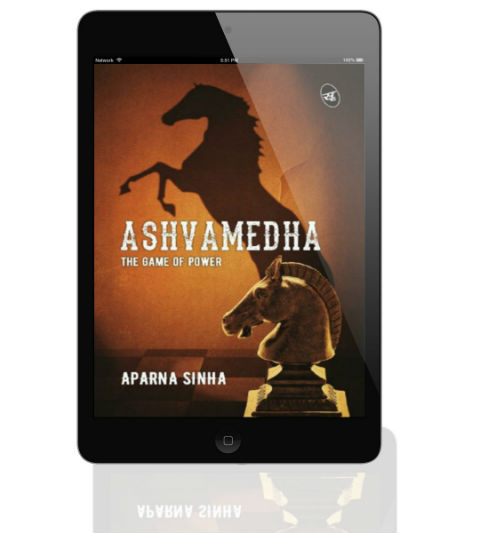 Ashvamedha: The Game Of Power By Aparna Sinha | Book Cover

As you can see the cover page shows an illustration of a charged horse in the background and see a replica of the same form the game of chess in the front. Both in opposite colors. A shade of saffron along with the black color makes the background interesting. The cover page is not super attractive for sure, but it is interesting and impressive.

It all starts in a remote village named Bikrampur in Rajasthan. A helicopter met with an unexpected fate in the sky of the same. There are no survivors. Later, we come to know that one of the remarkable (in many senses) politician was travelling through the same! Was it an accident or sabotage?

We eventually came to know about Sumona Thandi. She is the heiress of a big business and she runs successfully with iron hands. She was informed about this mishap! Of course, all the top business houses keep an eye on political happenings of the country, especially in the area they have an investment in. But was there anything specific she should be concerned about?

In a foreign country, a meeting between underworld fellows went wrong.

A desperate and honest young person in a village of India, gives his best and cracks the civil services exam and is appointed as an in-charge of a place in Rajasthan. He wanted to do his job with honesty and serve the people, will he face any challenges?

India has elected one of the most remarkable, dynamic and young person as the prime minister. He and his party face challenges (from outside and from within) when it comes to wiping out wrongdoers. If these were not enough for him to keep himself busy there is an unknown challenge of a new kind of terrorism is waiting for him!

There are many other parallel threads going on which link with each other. Over the course of the events, we meet many characters including Ashok Kumar Nandi, Ashwin Jamwal, Indra Mohan Rathi, Suresh Armugham, Prateek Thandi, Chandrabhan Yadav, Srujan Singh Lohia, Adya, Viswa, Hades, Arun, Ranjan Saxena, Param, Akhil, Nirjye, Jahvn,… and others.

If you love reading thrillers, this book is a pleasant surprise for you. The way the author has kept the parallel threads running is really admirable. All the threads are set up in its own specific arena. And yet, the author has successfully managed to explore them convincingly. While one thread explores the problems in the bureaucracy, another is focused on politics. While one thread shows how hard the life is and how people try to come out of it, another thread explores the luxurious lives too. In this book, there are politicians, officers, media persons, young fellows who are doing hard work and sacrifices for the betterment and at the same time there are others who are quite opposite to them. There are international security organizations and criminal syndicates too. Overall, it has the versatility of the content.

A strong point of the book is the realistic way in which the situations are explored. At various places, you can find interesting conversations/situations that remind you of real incidents and/or surroundings. And some of the stuff will remind you of some fantastic international thrilling movies.

The author is good at creating a scenario. In fact, the book starts in a really interesting way:

Barely a few kilometres from Thar, a small village of Bikrampur had turned into a burning furnace. It was afternoon and roads were deserted.

And then it moves ahead in a gripping manner:

A bored ten-year-old boy, indifferent to the outside climatic condition, sneaked from his kuccha house and began playing silently with a stick that he had picked up from the street. He ran aimlessly on a barren land, beating every inanimate object on his way. It was a useless exercise and it only made him tired and long for a companion; there was nobody. Parched and dejected, he finally stopped and began beating the dried leaves of a small shrub near him. …

So fantastically written, and exploring the scene in a realistic manner right? At the same time, the author is good at infusing emotions in such tricky situations too. In a scene where the villagers witness the burning chopper and puts in their efforts to douse the fire, she adds:

Water was scarce there, but they knew there could be people inside; empathy overpowered practicality. Water touched the metal and became smoke instantly.

Also, the emotions of the father of the child who ditched his possible death when the blast has happened, are worth reading.

Some lines reflect the feelings of every genuine citizen and will be able to connect with him/her emotionally. And, it is very important for a story to touch the emotional cord of the reader.

India needs someone who is righteous enough to ethically utilize the taxpayer’s money and conniving enough to straighten up other corrupt people. We need an honest man with a gun to run this country.

The book has some fantastic oneliners. Here are some of them for quick reference:

… in a fight between a tiger and a lion, a fox always wins…

Emotions do not discriminate.

One man’s trash is another man’s treasure.

Ethical politics is a myth and clean governance is a chimerical dream.

The fear of the unknown is the worst fear.

The author successfully infuses emotions in tricky situations. Here are a few examples. Of course, we cannot mention the context to avoid spoilers.

Physically, he might be a mess but his heart was as light as a feather.

Politicians are known for misuse of power and corruption, but behind their political visage is a back story – of loss, betrayal and hardship.

But then human eyes are capable of reflecting their own emotions in others.

The following line reflects the mindset of the people who has a hunger for power.

I don’t care about being right or wrong, I just want to be powerful.

What good is the power if noboday knows you have it?

The tragic situations, an honest administrative officer has to pass through, when he was an “odd one out” in the corrupt system, and how they affect the mental state of the person are reflected in the following lines:

During our training, closure of such files and quick decisions were applauded. In reality, its application had different ramifications. It is condemned and you are silently eliminated from the scene.

And here is one more:

The book has some philosophical lines where sarcasm is also infused, to make things lighter. But, they convey the wisdom lessons quite effectively.

We have an angel on one shoulder and a devil sitting on the other. Sadly, the devil is louder. But when we go to bed at night and all the voices fade, we hear our heartbeat.
Profound. Very philosophical, especially for a lawyer turned politician and you are not even drunk yet…

How two opposite feelings can result in almost the same output, is elaborated in the following lines:

Hatred, just like love, can make you do impossible things. Vengeance is the single motivation to perform the most difficult tasks in had, under most untoward circumstances.

By the way, if I am asked to choose only one line from the book, I will settle down for the following, as there is truth in it.

Irrespective of the stature of the person in the society, one can never be formal at an old friend’s place.

The book has some proofreading errors which must have been taken care of. For example, some lines have unexpected line breaks.

I took the front seat because I had been asked to do
so; because I was …

There are places where space after a punctuation mark is missing. Eg:

All of a sudden Hades felt uneasy.There was …

There are some lines where you find some words are missing. For example:
It was half past five and they had to be terra firma by eight.

The book has its share of cuss words and adultery references, that makes it for mature readers only.

On the whole, it is a refreshing thriller. The positives outweigh letdowns to make it a good choice for mature thriller lovers. As we bought it during a promotion, it is value for money for us.