Humans have always been ambitious. Throughout our history, we have tried to overcome the physical limitations of our bodies and continued to evolve through our mental capabilities and faculties. We have always had the affinity for the supernatural, the mythical and the magical. We would so much like to believe that magic exists 🙂 that we have created countless numbers of fictional work through the early epics to modern sagas featuring magic in some form or the other.

We are a big fan of the genre, whether it is the tales of Dashkumar Charitam, or the western tales of Tolkien, the modern day Harry Potter or the adventures of Alif Laila…
Stories are better told with a spice of magic…

So we are always looking for such tales and recently we explored the hugely successful American Author Raymond E. Feist who has created the world of Midkemia. We found the first two books written by him Magician: Apprentice and Magician: Master in a handy audiobook format read by Nicholas Guy Smith.

Published by Bolinda Digital, these audiobooks are read from the author’s preferred edition of the Riftwar Saga books. We enjoyed these and here we are sharing our thoughts on it with you:) 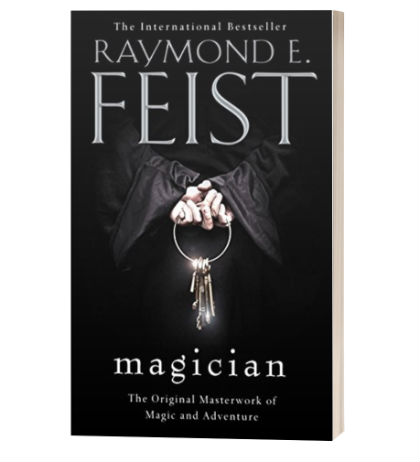 Magic is always a challenging part to visualize and represent in the form of a graphic. The designer used dark shades in the background and glooming keys in the hand of a person as the main elements on the cover page. Minimalistic and simple right? And yet, you can find the cover page attractive too :). It also thoughtfully represents the elements of the story. Overall, a simple yet attractive cover page.

In the world of Midkemia exists the small region of Crydee. Ruled by a noble duke, it is home to orphan Pug. When he is a teenager, Pug is taken on as an apprentice by the magician Kulgan. While Pug definitely has potential, the way he wields magic is not something Kulgan has come across before. Pug meanwhile has a happy-enough existence with his friend Thomas and love interest in Princess Carline. In an almost fairy-tale adventure, Pug saves the princess from the trolls and is made a squire in the Duke’s court.

Life change forever though when Pug and Thomas discover a foreign ship that is found on shores of Crydee after a storm. The ship and its strange people are literally from “out of this world”. There is a “Rift” between the worlds – very multi universe like – that allows such travels and alarmed, the duke of Crydee decides to travel to Krondor – the capital of the Western Realm to seek help from the king. On the way, they have to face battles with “Dark Brothers”. The party survives the attack but is separated. Thomas ends up taking refuge with the dwarves, but not before he has unknowingly taken on spirit of someone dark and powerful.

Pug’s journey with the Duke leads to disappointments in the meeting with the King Rodric, who refuses to help them, finally ending up as a slave when he is taken on captive by the otherworldly Tsuranis, across the rift and into Kelewan. Years pass – Pug learns to live as a slave, makes friend in Laurie and one day finds himself picked up by Kasumi, young son of the his masters, who takes Pug out of the slave camp.

Kasumi wants to learn the ways of Midkemians, so he can work as emissary to bring end to this stalemate war between the worlds. The Tsuranis have their own magicians called the Great Ones. The power residing within Pug is recognised by them and he is whisked off to a few more years of learning and self-discovery until he becomes Nilamber – a Great One who stands between the Worlds.

Meanwhile, in Midkemia King Rodric’s madness continues. As Borrick’s sons Lyam and Arutha keep the fight going on several fronts and save princesses in distress, there doesn’t appear an end to the battle of these worlds in sight. The magic inside Pug’s beloved friend Thomas has led him to become King of the Elves.

Finally, with Pug as the mediator the peace talks begin, but only to dissolve due to treachery… When one war ends, the others begin…

Who is the traitor? Is there a way to close the rift between the world and end this war once and for all?

First published in 1982, the book has been read and re-published multiple times – with most readers liking it for the spilling yarn it is that unravels with so many threads going in so many different directions. In this fantasyland, anything is possible. And if you enjoy the tales that may resonate at many levels with well-known stories old and new and till give you some light hearted entertainment, you’ll enjoy this book.

There are so many young characters here – Pug, Thomas, Lyam, Arutha, Rowland, Carline. All filled with potential and their whole life ahead of them. When the war and battles pull them to their separate destinies, we can see how they all must come together in the end, with their biggest battles probably with themselves until they discover who they are. With magic at hand, they have so much power to unlock within themselves. I think that’s probably one of the best selling points for this book – the hope and optimism of the young to survive against all odds and find victory in the end.

The fictional world created here of course borrows from various dynasties and empires in our own world, whether it is the lords of the Midkemia or the Tsuranis. While Midkemia reminded me of European feudal lords, my impression of the Tsuranis is they are a strange blend of middle eastern and Japanese cultures. Their honor bound culture, self-sacrificing fighting tendencies, valor and almost self-effacing respect for authorities are very Eastern in nature.

The background is very rich from the magicians spanning across the worlds, the craft of the dwarves, the beauty and magic of the elves and the courage of mankind – all coming together to fight the battles and hold the forts to preserve the way of lives as they know it. The women in the story are strong, but they do resent not having the same rights as the men at times.

The dialogues and interaction between the variety of races and species are interesting as the author highlights their different values and morales. The highlight being that on surface, the worlds across the drifts may appear very different, but the games of kings and councils and politicians remain similar, and that all kingdoms have enemies closer to home whether they fight others across the worlds or not. The differences between us only emphasise similarities between us no matter what banner we live under…

As mentioned before, I listened to the books in a handy audiobook format. Nicholas Guy Smith is a good, steady reader and keeps the books interesting enough for the listener. The books are available in a Kindle edition at reasonable price though. Please refer to the below given quick links in the same regards.

A definite read for all lovers of a magical tale that unravels in plenty of time across the worlds….

Previous: An Interview With Pankaj Giri – The Author Of – The Fragile Thread Of Hope
Next: Ashvamedha By Aparna Sinha | Book Review