As you all know being bookworms and forever exploring new authors and their works is what we love to do here on ThinkerViews platform. And we rely very heavily on the great friends we have in this team to keep adding books to our Kindle collection on every opportunity.

And so the team always is spoilt for choice and recently, when I was browsing through the Kindle collection, Ashok and the Nine Unknown caught my eye. Partly I think because I was reading the Vikramaditya Veergatha series at that time and that also has a council of Nine.

We liked the Vikramaditya Veergatha series books and have published reviews on the same.

And from thereon, I read Ashok and the Nine Unknown and here are my thoughts on this book written by Anshul Dupare and published by Rupa Publications in 2018.

The cover page – the portal to this story – features a kingly figure with a strong physique seated on a throne. The king’s eyes are closed in contemplation and he has two hands forming a mudra in front. He appears to have two additional hands though – one holding a sword and one holding a shield. He is surrounded by nine identical figures – the Nine Unknown, the nine faceless, nameless unknown people he seeming engaged. 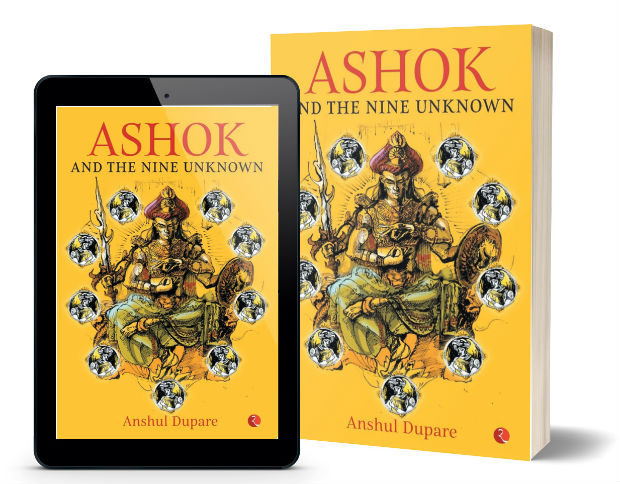 With its dull mustard yellow background, the book cover has a feel of an old painting. It would be interesting to see if the next edition comes out with a more sleek, modern looking cover page as is the trend with the historical fiction being published nowadays.

Amidst the tens of thousands of names of monarchs that crowd the columns of history…the name of Asoka shines, and shiines almost alone, a star.
– H. G. Wells

It is 261 BC, as we meet Ashok in the aftermath of Kalinga War. Facing firsthand its unprecedented brutality changes Ashok such that he renounces the path of violence and warfare for the rest of his life. But changing the present and future is not going to free Ashok from the burden of the past, as he finds out when confronted by a survivor of the Kalinga war named Amartya.

Amartya curses Ashok for bringing death and devastation to Kalinga and leaves Patliputra on a quest for revenge. He arrives in Mayong – a place of witchcraft and wizardry – in north-western India. The magic heals the wounds of his body, but transforms his spirit into a monster who will never find peace. The village of Mayong falls to internal treachery and external interference from Chinese travellers. When Ashok comes to visit Mayong, Amartya’s thirst for revenge only grows stronger.

But, Ashok is not alone. During the past few years, he has searched for and found Nine people from around India who are experts in the following fields:

With their help, he wishes to build a bank of knowledge that will contain all there is to know about this world and how to live in it. While their identities and true purpose are not shared with public, one of the members is Amartya’s younger brother, Vatsal. Vatsal and Amartya meet, but Amartya has morphed into something unrecognizable and Vatsal returns to Patliputra with Ashok’s delegation with a heavy heart.

Soon after Ashok receives a cryptic message, which when studied in depth by the Nine Unknown, points towards Egypt and the lost civilisation of Atlantis. Things start to move rapidly as the organisation of Shadows attack the palace, and chasing them, Vatsal ends up a prisoner in a dungeon. Mysteriously, the members of the Nine Unknown are being hunted and soon only a few are left. Vatsal is rescued by Karnika – another member of Nine Unknown – and Vatsal decides to accompany her on a mission to Egypt without anyone’s knowledge.

What is the fate of this arduous mission involving an overland journey from Patliputra to Egypt?

Was there any genuine person in the Nine Unknown?

Is it time for the end of Ashok’s life and reign?

And will Amartya ever find peace?

Samrat Ashok stands alone in our history as a larger than life character. He came to throne after killing his own family members and for many years carried of campaigns of war as Chand Ashok. But he underwent a transformation after the Kalinga war to eventually be known as Dhammashoka, for his efforts towards propagating Buddhism. His own children are said to have become monks and travelled to distant lands to spread the message of peace. Following passage from the book describes Ashok’s pledge to peace:

I stand before you all, with open arms and open heart. I stand here to embrace love and erase war. I know that you have suffered. You have felt great pain and shed many tears. I know this because I have suffered too. The suffering caused by war doesn’t end on the battlefield. It continues to haunt and poison the minds of the survivors all their lives. It changes people, as it changed me. You may think I have been victorious, but I have not. I may have won the war, but I have lost in life, because true victory doesn’t lie in conquering nations and robbing their wealth. True victory lies in winning the hearts of people. The power of arms will always be inferior to the power of dharma. I, Ashok Maurya, Son of Bindusara Maurya and grandson of Chandragupta Maurya, take an oath before you people: this will be my last war.

So, with such a large personality, you would expect this to be Ashok’s story. And it is, for the first few chapters when the author shows the immense pain and brutality that was the Kalinga war.

But this book is more of Amartya and Vatsal’s stories, with a few other characters also stealing the limelight at times. Ashok is in the background and while he may be seen as the initiator or motivator of a chain of events that change the lives of all other characters. It is interesting to see the author play with these characters and the massive changes in their lives as they waiver between the light and darkness. There is an element of surprise with a lot of characters that the author brings out as the story progresses e.g, not everyone on the Nine Unknown is as knowledgeable as they claim. The Nine Unknown also contains a spy and a fraud. And obviously, this also makes you question the ability and loyalty of the selectors.

While this adds to the surprise element, it also means that sometimes you find it hard to see how this character can evolve into that and there is a feel of discontinuity until you come up to something that may or may not explain their behaviour.

At the start of the book there are images showing the ancient silk route spreading from Asia to Africa, and the author has included some Chinese characters here, which remind us of the travellers who came from China and wrote accounts of the Gupta and Maurya kingdoms. And the way Anshul Dupare has tried to connect the 9000 years old kingdom of Atlantis with the Egyptian civilisation on the banks of Nile, is quite intriguing. 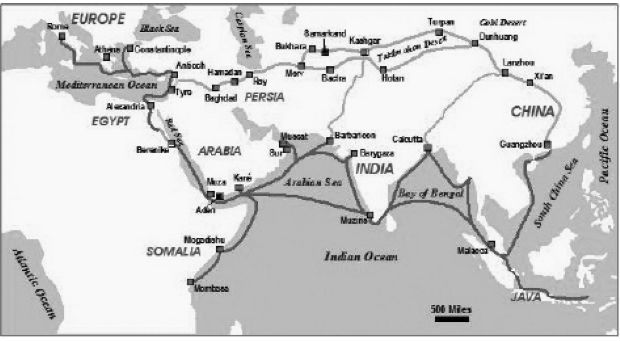 So, trying to keep spoilers at bay, let’s give you some quotes from the book:

Solving the problems you created yourself doesn’t make you a good man.

A man isn’t born with every virtue, but he learns them through his cognizance and his conscience.

Hope and peace and love:

Of all victories, the victory of dharma is the noblest. The sharp point of the sword spills blood, but dharma brings forth he fountain of love.

Until the power of love overcomes the love of power, there can be no peace.

Of the human tendency to go in denial when things do not go as per our expectations:

Even when we know that something bad is going to happen, there is still a ray of hope in our hearts. We keep a green tree in our hearts, in the hope that birds will surely come. But when we are actually about to cross the bridge, the flame of our hopes is extinguished by the harsh winds of reality. The shock kills our desire to cross.

When a child is frightened by the dark, his mother tells him to close his eyes and fall asleep. That the darkness will automatically fade away. But closing your eyes and ignoring the problem doesn’t make it go away.

But life is all about balance:

When the vanquished walk among the victorious, it seems to them as if every eye is teasing and tormenting them, as if every face is fostering their failure, as if every façade is suddenly proud of its mightiness over them. But isn’t the world just a reflection of yourself, of your soul? And maybe it is just you – laughing at yourself.

I liked the way the author discusses the king’s routine and his duties towards his people or the principles of good living that Ashok followed after his transformation. With the canvas of the book including lost, ancient civilisations from across the continents, and the span of 30 years, I think the book needed to be much bigger to do justice to the scale and characters, as the Nine Unknowns don’t really achieve their purpose. Maybe there is another book to follow :).

All in all, an intriguing read if you have around 3 hours to delve into the days of Samrat Ashok.

Previous: Ashvamedha By Aparna Sinha | Book Review
Next: An Interview With Rohit Sharma – The Author – Our Love Story