Best movies and web series to watch on ZEE5 this July

We love watching Movies, web series and Plays. During earlier days going to a theatre was the only option to watch movies and plays. But the technological advancements brought us a lot ahead from those days. From the days of Television to VCP and VCR, even CD/DVD Players are out-of-fashion these days. Due to the availability and affordability of high-speed Internet video-on-demand is the biggest player these days. 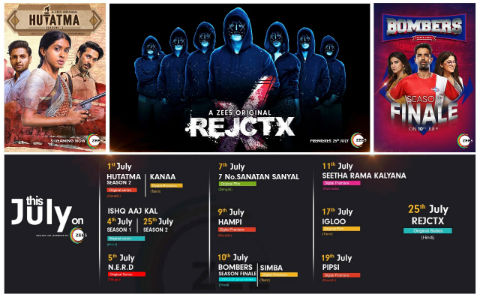 Best movies and web series to watch on ZEE5 this July

As a result, various online video streaming websites have come into existence and are getting popular too. Out of them, ZEE5, in particular, has been creating a lot of buzz for its impressive content collection. Today, I came across the latest offerings and scheduled new releases by ZEE5 which I would like to share with you all. Bombers – a ZEE5 original, interest me in particular.

One of the good things about an on-demand video-streaming site like ZEE5 is the freedom of watching a movie or web series at your wish, as per your mood. Another USP of such a website (which comes with their respective mobile apps also) is the “originals” they bring in.
Let me share some more information about – Bombers.

Bombers is a ZEE5 Original starring Varun Mitra, Meiyang Chang, Ranvir Shorey, Aahana Kumra, Prince Narula, Sapna Pabbi, Zakir Hussain and Anup Soni. Footballer Sunil Chhetri also makes a special appearance in this Sports Drama. Set in Chandan Nagar, West Bengal, this web Series revolves around the sport of Football. In India, though Cricket is considered as the most popular game, Football has its own fan following. The story talks about a football team and its resurrection after a tragedy which is something the audience, especially the sports lovers will like to explore. So keep it in your kitty list :).

While the catalogue is quite long and the movie/web series choices are different for different viewers, let me share a short list, in no particular order.

If you love to know about historical incidents, Hutatma will interest you for sure. It explores the story of the Samyukta Maharashtra Movement. The movement was started in 1956. It had an active role to play in the bifurcation of Bombay state into Gujarat and Maharashtra in 1960.

Simba is a Tamil film which talks about a bond of love between a young guy and a dog. It happens when the male protagonist – Mahesh (played by Bharath) – comes under the influence of cannabis and his crush hands him the custody of her dog for a few days! Mahesh, under the hallucinations, begins to view the dog like a human (played by Premji Amaran)! Surely, it seems to be a laugh riot by director Arvind Sridhar right?

To appeal the audience, the director put various sequences where the dog is speaking in the voices of actors like Raghuvaran, VS Raghavan, Shiva, K Bhagyaraj, Suruli Rajan, and Jai.
According to some viewers, the movie has a really good start, and if it could have retained the same tempo throughout, it could have been much better. Some consider it as a Kollywood version of Pineapple Express & Harold and Kumar.

After winning people hearts with Ishq Subhan Allah on TV, ZEE5 is attempting a fresh experiment with Ishq Aaj Kal – a web series spinoff for a TV show. With a vibe similar to that of the original TV show, Ishq Aaj Kal takes on the thriller format in its transition to web. Featuring Ankita Sharma and Angad Hasija in the lead, the show is sure to win hearts of Ishq Subhan Allah fans and makes fans out of new viewers.

NERD – this word often refers to a techie. In the ZEE5 Original – it is an abbreviation for
Neither Either Really Dead! It is ZEE5 original in Telugu. Of course, it revolves around the life of a lonely techie. But there is a twist.

There comes a time when not only one but 6 girls entered in his life! So, he is a techie but no more lonely. But, what happens when all the girls end up dead, one by one? will happen now? Will the things go as anticipated by him? Or will his life be upside down?

Addressing crucial issues faced by today’s teens, REJCTX will use its musical backdrop (music is by GOW fame Sneha Khanwalkar) to get across its message. It would be interesting to see what this series has in store.

Now all the aforementioned releases are available on one platform i.e. ZEE5, so it will be easy for the viewers to find them for watching. In the end, I am glad to share these movies/web series online for you to watch.

How many of the above-mentioned Movies/Web series did you get a chance to watch?
And, how many of them which are pending and you are curious to watch? Feel free to share your views and review about this article, these movies or anything in the context.

Maleficent | Amazing Spiderman 2 | Upcoming Movies We Are Keen To Watch

Kaanchi | Kochadaiyaan | Two Upcoming Movies We Are Curious To See
2019-07-08
Editor2
Share !
Previous: On the Run with Fotikchand by Satyajit Ray | Book Review
Next: The Rise of Nine – Lorien legacies book 3 | Review