As promised in the review of The Power of Six, here are our thoughts on book number three of this saga featuring good guys – nine members of Garde from the planet of Lorien who were sent to Earth to hide and survive until their legacies, i,e, superpowers develope, so that they can fight the evil Mogadorians who destroyed their planet and have every intention to destroy Earth as well…

We have talked about the first two installments before, namely: 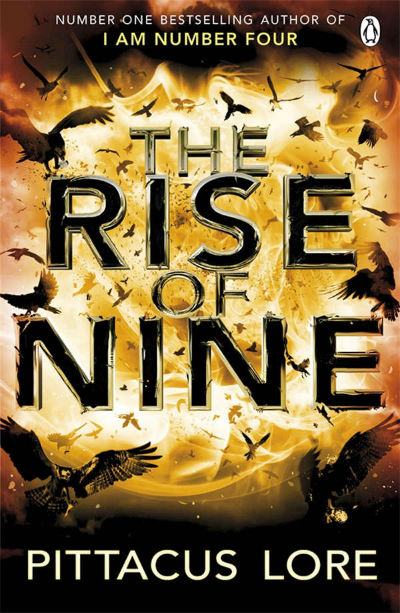 And although not always great logically, the saga has great thrilling and entertainment quotient, and we were very happy that we had continued with it, as we found an unexpected Indian connection in this particular book…

We have stuck with the handy audiobook format again, and you may also be able to get this book for free on Audible if you are Amazon prime member:
https://www.amazon.in/The-Rise-of-Nine/dp/B079WWPGTK/

To reintroduce the characters and re-capture them, let us look at a summary of where we left them in the last book:

Number Four
John Smith and number Nine escaped the Mogadorians, but John’s best friend Sam was captured by them.
Number Seven
Marina, Number Six and Number ten Ella – survived the battle with Mogadorians in Spain, but with great losses…

And so, now the only ones they are missing are number five and number eight.

While John focuses his energies on getting his best friend back, Number six, Marina, Ella and Crayton journey to – India – to look for number eight, as internet is full of stories about a boy living in the Himalayas, who is hailed as none other than God Vishnu and has come to Earth to fight all evil.

Six, Marina and Ella are met by Commander Sharma in Delhi, who takes them to the mountain abode of Vishnu. They are attacked on the way, but survive thanks to all their legacies combined. Sharma informs them that Lord Vishnu will test each of them, before he meets them. They find him in a lake, resplendent with four arms holding Shankh, Chakra, Gada, and Padma – Conch, discus, maces and lotus…He fights Marina in his Kurmavatara – as a tortoise, Six as Parshuram the warrior sage and Ella as Narsimha – the half man – half lion…

All three Gardes pass the test and Lord Vishnu accepts them. And yes, he is actually number eight. He has the abilities to teleport, shape-shift and incredible strength. He has just been using his knowledge of Hindu mythology to take forms that happen to be various avataras of Vishnu, although I must say his character is designed a lot like Krishna.

Both John and number eight however have been visited in their dreams by Setrakus Ra – the main villain who has been the Mogadorian leader responsible to kill numbers one, two and three and the Nemesis of everything loric. Number eight takes them to an ancient cave that has lorelight stone and can serve as a teleportation gateway to other Loric sites across the world.
Their brief time of happiness and re-grouping is soon over though and they have to escape the Mogadorian attack, only to find that something went wrong with teleportation – leaving six to land into a desert in New Mexico while Marian, Eight and Ella end up in Somalia…

In USA, John and Nine are captured again, escape again. To John’s amazement, Nine leads them to his safe house in one of the most well-known buildings in Chicago. Here is a home filled with sunshine, training facilities and weapons. John and Nine, however, seem to never agree on what they should do next and spend a fair bit of time fighting with each other, until they agree that things are happening in New Mexico and they should go there.

Marina, Ella and eight finally make it to New Mexico, and so does John and Nine. By this time though, Six is already at Setracus Ra’s mercy…

Is this the final battle then? And who will survive?

Once again, if you are looking for Adrenalin filled tale of chase and run, you won’t be disappointed. There is the added exotic variant of travel to India and Stonehenge and New Mexico. The book supports all popular theories like, the Greeks Gods were actually Loriens, it was the Loriens who built Stonehenge, that most of the roman mythological tales originate from Loriens. Essentially that human civilization could not exist as it does today without aliens. Reminds you of The Transformer building the pyramids of Egypt or movies showing that all the cave paintings at ancient sites are done by aliens.

As an Indian, you sometimes wonder how much fiction is out there that is based on Greco-Roman mythology, but hardly any references to India, although our mythological tales are heavily enriched with imagination. It is however becoming a very popular genre with current Indian writers and I was quite amused by how the authors of this book have used the Indian mythological tales about God Vishnu and his Avataras to create the character of number eight with similar traits where he is able to shape shift and travel in time and space. It is a change from being the country of snake charmers and magicians :). Of course, there can be many viewpoints to this as some people may not like an alien impersonating Lord Vishnu and mislead devotees.

The characters are getting slightly better, as long as you remember that although aliens, they are very much teenagers and so have the tendency to be moody and sulky, and occasionally arrogant. The dialogues try to imitate the vernacular of the times, but since there is usually an action sequence not far away, you don’t have much time to think about it:).

With run time of almost twelve hours, this audiobook is a better listening experience due to variety of narrators who do a good job of giving a personality to the characters so that you can differentiate them. I still think though that there is a lot of room for improvement in the American part of the book…

An entertaining, thrilling (although predictable), story of good guys finding each other and teaming up to fight the evil…

Previous: Best movies and web series to watch on ZEE5 this July
Next: An Interesting Author Interview With Mayank Chandna (Abhaidev)