Posted by: Editor July 7, 2019 in Books, English Leave a comment

Growing up in India of 20th century had its perks in terms of long, hot summer vacations where there was no school and children had not much to do except entertain themselves with gully cricket and street games with other children, spending part of the holidays with relatives where noisy cousins gathered and read classic children’s literature that included adventure stories from around the world.

Now with the internet, the vacations are very different. On the good note though, you don’t have to wait for your favourite books to arrive home or wait for the next Sunday installment in newspapers and magazines, but can get to them easily in digital format. In honour of the school holidays, we have been indulging ourselves on children’s classics and on behalf of team Thinkerviews, I’d love to share my views here on one of our all-time favourite writer’s works.

Although Satyajit Ray became a household name in India through his great films, he had also written tons of popular Bengali books including the Adventures of Feluda, which has a ‘place forever’ in the classic young detective fiction.
In this post though, we are talking about one of his shorter books called ‘On the Run with Fotikchand’. An English translation of this book by Gopa Majumdar has been published by Puffin Books and a Kindle edition is available.

A beautiful, old world cover page illustration by Dipankar Bhattacharya shows the stormy skies in the background. A young boy in classic outfit of short-sleeved shirt and half pants is running with an older man in Kurta-pajama and a bag full of magical paraphernalia. We also see two figures in the background who appear to be chasing the man-boy duo. 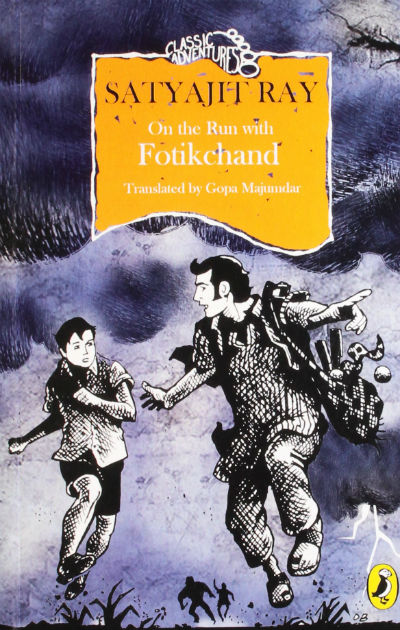 On The Run With Fotikchand by Satyajit Ray (Translated by: Gopa Majumdar) | Book Cover

One of the main attraction of such books, when they were published in newspapers and magazines, was line drawings and illustrations, and there are more of these scattered through the book, making the reading experience even more enjoyable.

We meet a young boy, just coming out of unconsciousness, on side of an unknown road, before he quickly loses it again. When he wakes up next time, a kindly truck driver is trying to get him some milk. Another kind, gentlemanly soul appears and takes the boy in his car to a doctor in the nearest town. Unfortunately, the boy appears to have lost his memory and being afraid of the police, he runs away from the Doctor’s. He makes it to a railway station, where he manages to get in the train with the help of another helping man. Their meeting is very funny. When the man asks the boy for his name, the boy quickly picks up an old-fashioned name he has seen on a shop board: Fotikchand. The man realizes that this can’t be the boy’s real name in these times and so he introduces himself as Harun-al-Rashid.

Anyway, they soon get over the difficult encounter and Harun assumes that Fotik is running away from an abusive family. He tells Fotik about his career as a performing artist, a juggler, who is returning from Coimbatore. He finds a job for Fotik in a small tea shop run by Upen Babu. In a few days, Fotik learns to be happy with his existence, as working in the tea-shop, learning juggling from Harun, being an assistant to him when he does his performances under Shaheed Minar. Life is good.

But soon enough, chance brings the two goons to Upen babu’s tea-shop. These guys seem to know Fotik from before he lost his memory and are bent to get him back. And of course, Fotik’s family is trying really hard to get him back. In addition to the help from Police, they have also declared a big reward for whoever finds him.

There are too many people chasing Fotikchand, but what does he want from his life?

We loved this story, not only for its nostalgic feel but also for being a reminder of the fact that children are very resilient and most classic adventure stories featuring them become popular because they highlight this fact. In today’s world, where every child is precious and protected, more so due to increased criminal activities around us, it is nice to be reminded that the world around us used to be simpler and kinder.

There was a time when it was OK to leave your children with your neighbours or relatives without having to worry about them, as you were sure they will be treated like family members. Such people still exist of course, but modern life’s stresses have made a lot of people more wary of taking on looking after children.

And although it is clear from the start of the book that Fotik has been through a bad experience involving violence and accident, he is looked after by the truck driver, then the businessmen, Upenbabu and above all Harun, in whom he finds a teacher, a role-model and a friend, all rolled into one. Fotik shows admirable courage to take on life as it comes, when he has lost all memory of how it is supposed to be, and even when that life returns to him, he doesn’t forget or abandon the people who helped him get through difficult times.

These are all good traits to teach growing children – a thirst for knowledge, value of hard work, loyalty, looking out for your friends and resourcefulness when facing adverse circumstances. And like other Satyajit Ray books, this one also balances out all these messages in a breezy tale of adventure without making heavy work of it.

In the pre-ggogle days, the children’s books were their windows to the world and this book is also filled with little passages imparting general knowledge like the ones below:

What was that noise? It just went on and on, steady and monotonous. It was the sound of crickets. Could it be described as call? No, crickets did not call. They were not birds, but insects. He knew that.

He knew about cool light of fireflies.

As Harun talks to Fotik about the best jugglers in the world, including his deceased Ustad, he uses following metaphor, which is brilliantly educational:

This earth is like a ball, isn’t it? Think of the other planets – Mercury, Mars, Venus, Neptune, Jupiter, Saturn. Each one of them is like a ball, and they are revolving around the sun. And the moon circles the earth. Yet, not once do any of these collide with the other. Can you imagine? It’s juggling of the highest order.

Satyajit ray has often been accused of showing India’s poverty on screen in his films, but I also found his picture of this Calcutta slum so harmonious and so realistic of most of the India, and that art and beauty can thrive anywhere:

In this slum you will find Hindus and Muslims and Christians, all living together. Some of them are such talented artistes that takes my breath away.

The book is an adventure tale, but one of its prominent messages is also about growing up and letting things and people go when you have to part ways with them. At end of the book when Fotik realises that no matter how close his bond with Harun is, their lives will have separate paths, he also receives following message from Harun showing him the endless possibilities of the life he is only just starting:

There are different kinds of artists. You can stay in a beautiful home, receive good education and still be an artist – play with words, or colour, the possibilities are endless…

A brilliant, inspirational and entertaining read for young children, teenagers and all adults who love a good story. At approximately 100 pages, it won’t take you more than a couple of hours if you share it with young readers 🙂 …

Previous: That Thing About You by Mayank Chandna (Abhaidev) | Book Review
Next: Best movies and web series to watch on ZEE5 this July