There are a very few magazines we came across which offers a quality reading material. Safari – a science and knowledge magazine is one of them. The latest issue (July 2014) is out and here are our views and reviews for the same. 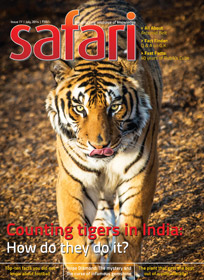 Since a few issues, we observe that the cover page of this magazine gives it a look of a wildlife magazine and this issue is no exception! It is a tiger looking right into the reader’s eyes through the cover page this month.

The inner left cover page contains a fantastic picture of a Hoopoe (a bird found in Europe) feeding a Hoopoe chick who is waiting for the food in the nest. It is simply a flattering experience to see the family bondage in the birds via this photo. We recommend, not to miss it.

The FYI section contains three small yet interesting articles as mentioned below:

Kolar Gold Mines are located near Bangluru (around 98 Kilometers from it) which was discovered by a British engineer many years ago. After a lot of gold is already milked from it, the cost-benefit ratio to get gold from the mine dropped to a saturation point over the course. Thus government have close the operations here in 2001. But now the ever growing need to have gold (and to prevent some of the of foreign currency, needed to import it), the government is planning to resume operations here. Interestingly there is only one company have proposed a tender for the same! There are more information about it is written in an interesting manner in this articles. We human beings are very fond of Gold due to some reasons! and thus the article will be found interesting by a lot of readers.

Another article in this segment is about – Shakuntala Express. It is probably be the only railway network which was not taken over by the Indian Railways. History lovers will find this article an interesting read.

The article about the inventory of soft drinks is really interesting. It discusses the discovery of “aerating” (the process of mixing Carbon Dioxide into water and other drinks); which leads to the current soft-drink industry worth billions of rupees (or dollars). The historical events are mentioned in interesting manner. You shouldn’t miss reading it.

As the Football world cup is going on, a lot of football lovers around the globe are found following the updates of the game very religiously. An article exploring top ten fascinating facts about the game of football, written by Harshal Pushkarna is worth a read, for all football lovers. And if you are not much fond of football(!) then read it as a knowledge seeker and you will find it interesting for sure.

Ever wondered that how the wild animals like lions, tigers,… are counted? An article about counting of tigers in India, written by Ravindra Acharya brings answers to the questions about the same. It is a long enough article added with information tables, illustrations and photograph. The language of the article is quite simple, making it enjoyable by all the readers.

We often hear slogans to make “best from the waste”! But do you know the nature does it at a large extent in many cases! The growth of the jungles – for example is based on the natural fertilizers and the way it is spread by the insects, birds and others! This article is focused on a plant called Bornean pitcher. If you are a nature lover you will read it amusingly of course, but you can go for it otherwise also.

Rubik’s cube is considered as one of the best exercising toys for the brain. The fast facts segment – brings almost everything you want to know about this “brain game” in very summarized manner.

Dingoes – are the wild dogs from Australia. They became national problem for Australia due to their nature! Yes, they loose temper very easily and have developed killer attitude – literally! You5 won’t believe but the government have tried to resolve the problem by even constructing a 5,500 Km long fence to stop them wandering from one area to the other; unsuccessfully! Playing with the natural balance can be harmful beyond imagination, but in a lot of cases these adverse effects are seen by the future generations! You should read this article to know more about the incidents which led to this situation.

Gold, diamonds and jewelery; fascinated people since generations and it will continue in the same way! There are a lot of mystery diamonds we heard about which holds so and so curse with it, right? Hope diamond – is one such diamond. It is considered as the world’s most famous gemstone! If you like to read thrilling tales, than this article based on factual information will surely interest you.

The Q & A : Fact Finder segment brings the answers for the following questions:

The last cover page contains a detailed article about he “Asteroid Belt” which will interest to space lovers.

Overall a more balanced magazine issue which provides information about various aspects in consolidated manner. And it comparatively cheaper too. It is definitely worth the time and money you probably spent after its. Our verdict: just go for it. The only thing we missed in this issue is, it doesn’t have editorial!