Posted by: Editor2 September 3, 2017 in Gujarati, Magazines Leave a comment

While magazines are a great source of latest information and quality knowledge, it is tough to find the one which is worth spending time for. Safari is one such magazine. It is sad that English edition of the magazine didn’t survive, but the Gujarati edition has a remarkable readership.

We look forward eagerly to the latest issue of Safari every month, as we know that there is always something new to know and learn from it. And, here comes September 2017 issue of it which doesn’t disappoint. 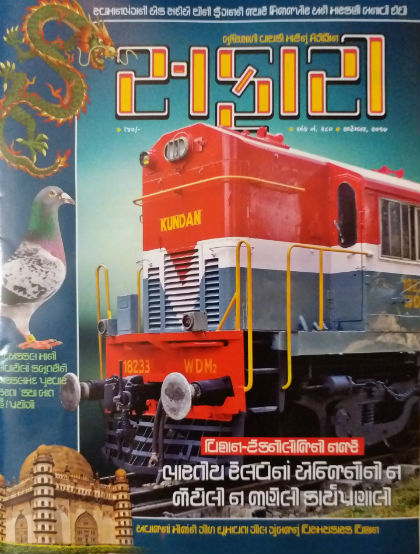 As you can see, the cover page creates a solid impression. A mighty looking railway engine along with a dragon and other snapshots makes it attractive and at the same time gives us glimpses of the vault of knowledge inside.

The inside cover page talks about the geographical significance of Vivekanand Memorial and how it links to the evolution of the earth.

We state it in almost every magazine review article that one shouldn’t miss reading the editorial. Editorial allow the editor to convey his/her vision directly to the readers. In that way, it works as a bridge between the readers and the editor.

In this month’s editorial, Harshal shows his concerns about growing piracy and eventually how it affects Safari magazine. Some people make PDF of the magazine and circulate it on various social media and some are showing illegitimate ways to download Electronic version of the same. While a few readers may save a few bucks, but eventually it leads to the loss for the publishers. And, writing a quality article requires a lot of hard work and efforts. We have mentioned it in many earlier articles also that please do not go for such illegitimate copies and keep purchasing the genuine ones. We need such magazines to survive.

Inside A Railway Engine:

In order to answer the super question of the month, team safari did research on various types of locomotives and published a detailed article in this issue.

“Indian railways” is one of the most complicated railway networks around the world which serves millions of people. There are many areas where the railway is considered as the life line for trading and traveling.

The article busts various myths and brings in some historically correct information about various segments of Railways. For example, a majority of people consider that the first railway tour was run between CST Mumbai (then Bombay) and Thane, while the fact is different!

It is a well-researched article written in an interesting manner.

China is the biggest country in the world in terms of population and it has its own historical ups and downs. Those who are keen about history might be familiar with the historical Opium War and how it affected China and its relations with various countries in the World.

Respectable author Nagendra Vijay comes up with an article about it. And, the first large segment of the article explores how and why Briton was unable to do trading with China in its own way which usually made the other country to ultimately be ruled by Briton.

Actually, we see a lot of prejudices for and against China in around the World. This article, however, is written with the neutrality and it gives due credit to China for whatever inventions done by it.

The author wisely has avoided any comparison between India and China in terms of inventions and advancements.

It is then followed by the famous Opium war. It actually gives the clear idea about what it was and how it all happened.

Written in an interesting style, this article is written in a way that it gives a lot of insights of history to the readers.

At one end we often call a person “bird brained” when we found him of average or below average intelligence; on the other end, we try to utilise various skills in different birds to the maximum advantage.

Take an example of “pigeons”. While they are considered as harmless birds and are associated with peace, they are used the maximum to convey messages (even during the wars). Actually, pigeons are considered as the safest way to convey the most secret messages. They have a great memory when it comes to remembering routes.

There are many monuments around the world which are famous for their various attributes. While some of them remind you the marvels of engineering, the others may remind you the beauty in the sculptures. Gol Gumbaz, located in Bijapur, Karnataka, India; is famous for its unique ability to echo your voice for 11 times!

It is however very tough to be alone in Gol Gumbaz and get to hear your voice echoed for 11 times due to the rush of tourists there.

Ravindra Acharya came with a very informative article about Gol Gumbaz which is studded with some really nice images. The article talks about the tale associated with this monument and tries to analyse historical facts also.

If you are planning to visit South India soon, and planning to include Gol Gumbaz in your itinerary, the article will make you ready with the background information about it.

Indian Army, Robots And Using Them Against Terrorists:

Terrorism is definitely the biggest problem the world is facing. And, the problem is not new. Its roots are there in the days when the man used to be an animal. However, the intensity of terrorism keeps changing.

India is facing big law and order challenges in Kashmir due to terrorism and Indian armed forces are seriously thing about including robots in such combat situations.

The centerfold of this issue gives a briefing about the possibilities of it. I, however, feel that the article could have been a detailed one.

In addition there are segments like Q/A : Fact Finder and others which gives good tonic to the brain and are worth reading.

Overall, a definitely worth reading magazine issue which gives you the best for your time and money you spend after it.