Like every month there are probably thousands of magazines are published. But, how many of them are actually worth your time and money? Based on your area of interest(s), the list can be of different size. There are very few magazines which bring some substance in terms of knowledge and information and fall in “must read” category. Safari – a Gujarati Magazine definitely falls into this category.

The October 2017 issue of Safari reached the news-stands a couple of days late this month. It is the Diwali issue so it contains almost double the reading material (100 pages) compared to its regular issues. The price for this issue is INR 70.00.

First thing first, let us start with the cover page.

Studded with cheerful colors and interesting teasers of articles found inside, the cover page of the magazine is attractive and informative at the same time. It creates an impact of a knowledge magazine quite effectively. Full marks for the front and back cover.

Often remain underrated, the editorial is one of the most important parts of any media, be it a magazine or newspaper. It actually bridges the readers with the editor and allows the editor to convey his point of view(s) for the respective media and even contemporary happenings. 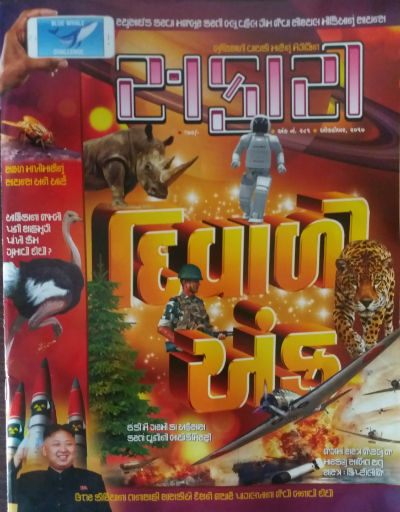 Harshal Pushkarna, the editor, talks about the long journey of Safari, the ups and downs it went through. He gets nostalgic when talking about the first rented office used as the publication front of Safari team and how eventually the shifted to the new one. We feel happy that Safari bought a new office and they are going to shift there, after Diwali Holidays. We really wish them all the best and hope that they keep giving even better magazine issues from the new office.

I remember Harshal talking about his plans to spend even this Diwali with the soldiers of Indian Army who will remain busy securing us even during these festival days, during one of his “Siachen Drive” seminar. Though nothing is mentioned in the same regards in the editorial segment of October issue, I am sure we will get to know about it in November – 2017 issue for sure.

by the way, what are your plans for Diwali Holidays?

I suggest you spare a few minutes and write at least a couple of letters to “The Brave Soldier of India” and send them Diwali wishes. Rest assured that it will definitely make Diwali awesome for them 🙂 Can’t we do this small gesture for them who keeps us and our country safe and secure? Here are some of the postal addresses:

In this segment, Safari usually brings in interesting facts some rather “unknown to the common people” places from India. Some of the craters in the Nandi Hills are very old. It is so old that you can say that their roots are in other era or ancient times. Rather than telling more, I will suggest you to read this small segment of the magazine to update your knowledge about amazing India.

Blue Whale is a well-known game these days. Sadly though for the wrong reasons. The game claimed many deaths in the recent time, and even some governments had to intervene and ban this game in various countries.

The most logical question is, if the game is known to be so dangerous, why people even play it? What makes them to fall in the trap to like the game and try playing it?

In a detailed article analysing the psychology behind people’s attraction towards such self-destructive stuff, Safari tries to explore various aspect. You can find the analysis for points including the rise of social media, the positive and negative effects of the same to the Blue whale game. It is indeed a “must read” article of this issue. The article is informative and analytical, but it is written in such a nice way that you won’t find it boring at all. In fact, it gives you a smooth reading ride.

My personal suggestion is, you should not miss reading this article.

North Korea and South Korea are almost opposite in many aspects, but they were actually segments of the same country! Which situations during the war times lead to the separation of the same, then? Why there is a dictatorship in North Korea. How and why the supreme leader of North Korea, despite being considered as “improper” by the rest of the world, gets so much support and respect by North Korean citizens?

It is obvious to have these questions. North Korea is in the news for many wrong reasons these days. It is also considered as a possibility that it’s nature and behavior may lead the world to the next major war! How this situation arose? And how the Kim Dynasty came to rule it and got the approval of the people of North Korea? And, why they hold so much grudge against America and other such countries?

To get the answers we need to explore the history and analyse the political and geographical circumstances that leads to it right?

I found a very detailed article about it in October 2017 issue of Safari.

While the article tries to analyse the things from the neutral point of view, the author never shies away from using the right and blunt words to explain it. It is really rare to find factual articles about tricky situations, and this article proves to be one such genuine attempt. Definitely, an article to go for.

It is said that Necessity is the mother of invention, and it is very true. When we desperately need something, we will find ways to achieve it. I think, in real life, we all use sign language or other ways to communicate in a way that the message reaches properly to the target but remain almost hidden from the others! In technical terms, it is known as a cryptic message. And the way to do it, is known as cryptology. Of course, not a real definition but in simple words.

Cryptology came a long way, from the simple means of replacing the letters from the previous or next alphabet to the Ceasar Cipher to modern 256-bit encryption in computers.

There is a detailed article about Cryptography found in October 2017 issue of Safari.

While this article could have been better with a few more references, it is informative and complete on its own. A worth reading article, no doubt.

Why an ostrich cannot fly?

Do you know that Ostrich, Emu and other many birds have same ancestors? And the trail reaches to Dinosaurs?

Have you ever wondered that why ostriches cannot fly?

If you are interested in knowing more about various species, then an article about “ostriches” in this issue of safari will interest you for sure.

As a regular reader of Safari, I am fond of “professor forget” articles published earlier. And it feels good to see professor forget in this issue. It is an interesting article which will give your mind a little exercise and fun both.

And that is not it, there are some other interesting segments in this issue.

After reading this entire issue, I can say for sure that it worth a lot more than the price and time you spend for the same.