Posted by: Editor2 July 4, 2018 in Gujarati, Magazines Leave a comment

While we see that tons of magazines almost flood the newsstand and magazine shops every month with their latest issues, not all of them are worth reading. Of course, the reader’s choice of reading genre plays an important role here. However, the price and most importantly the time required for the same is equally important factor.

If we need to advise a growing kid about “what should he/she read?”; most of us will suggest to go for knowledge oriented magazines right?

Safari – a knowledge magazine from India falls in this genre.

Though, its English edition couldn’t survive, its Gujarati edition is respected amongst the readers since many years. One of the core factor behind that is the research work done for each article published in any of its issue. And then also, we all are human beings and tend make some mistakes, including that of typing and spelling ones. Whenever an attention is drawn towards any such issue, the editorial team is quite open to accept it and publishing a note about it. This is something that even the most respected media houses and very popular news channels also shy away from.

Like every month, we were curious to read the latest issue of Safari (July 2018) and provide our unbiased views and reviews for the same. so, here we go.

Let us take a look at the cover page of the issue. 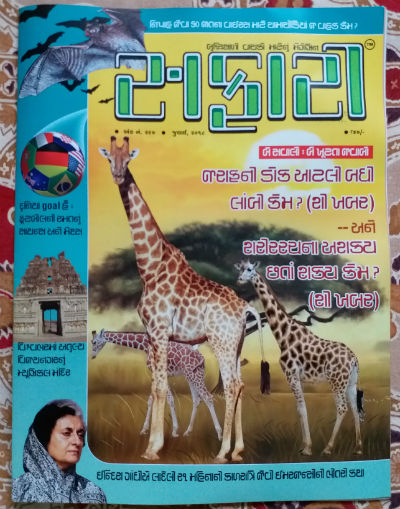 As you can see an interesting use of colors makes it attractive. The majority of cover area is occupied by animals giving it an impression of a wildlife or nature oriented magazine. The mention of Emergency on the cover page lets us know that there is an article about this dark period of democracy in India. Well, a lot has been talked about Emergency and democracy, especially in last 4 years. So, it would be interesting to explore it from the point of view of Nagendra Vijay, an author who is known for his interesting writing style and immense research efforts he put in, to collect the facts. For me, the cover page is quite interesting and makes me curious to go for it.

Those who are regular readers of ThinkerViews know that we advocate reading an editorial in any media. It not only let the reader know the vision of the editor for the respective media, but also, serves as a bridge between the reader and the editor.

In this months editorial, the writer mentions some of the un-democratic stuff happened in a country before around four decades. And, eventually he reveals that the country was none other than India (that is Bharat)! Of course, the magazine contains many other articles in the issue, but the editorial team know that most of the readers and critics will go for this article to see how the things are happened. And yes, these days people start linking everything with a propaganda. Based on what you mention, they start linking that either you are with this party or that party. But the things are not like that. In a democracy you should be able to take a look at any incident neutrally and then decide whether it is good or bad. It doesn’t make you a PRO or ANTI some party or country in anyway.

For those who consider the magazine often criticising a specific leadership, has to understand that those who were elected by the people to provide governance and acted should be praised and criticized for their moves. That is the democracy. In fact, in the “reader’s reaction” section you see one such question about the first prime minister of India, and read the answer to the same provided by the editor.

Again, I am neither trying to defend the magazine nor the editor, I am simply saying that journalism is an important pillar of democracy, and the investigative and courageous journalism where the content is represented with logical arguments and evidences based on the facts found during a research, one should have open mind.

And if we don’t have a learning approach from the incidents of the past, we cannot prevent the mistakes to be repeated. And it will surely affect our future. So read it with open mind and try to evaluate from logical reasoning.

Here is the publicly available episode 12 of Hindi TV Serial PradhanMantri which talks about this period.

Also, if you want to know more about this period, you can read this wikipedia article:
The Emergency (India).

One should have guts to praise Indira Gandhi for the decisions she had taken in the interest of the country and the courage she had shown during war times; and at the same time can neutrally talks about the Emergency.

Now, as we are talking about the Emergency period, let us us have a look at the article on the same in this issue.

Nagendra Vijay, the writer, tries to explore the series of incidents before and during the period. His research work and interesting writing are already recognised by a vast majority of readers. The article brings in some rare-to-find historical images embedded within. This 20 page article talks about various aspects of the same in detailed manner.

One must read this article to remain aware about fundamental rights and democracy, rather than seeing int from a political angle. A recommended read.

India, that is Bharat, is indeed incredible.

Do you know that, during the golden period of Vijayanagar Empire, like any other Hindu civilization, various architectural monuments were created. Ruins of some of them are still available and they are considered as wonders. Though, the invaders have destroyed a lot of them in parts and full, it still shows the reflection of the possible glory they possessed.

There is a temple there, which has its pillars made in such a way that they produces music!!!

The information about the same is so wonderful that by reading the same you will feel a desire to visit the place and experience the marvel of the sculpture. Decoding the science (fully) of such monument is not possible even with the technical advancements we have achieved. And, we call ourselves an advanced civilizaiton. Probably the people those days understood the science in better ways than us!

The article starts at the 3rd cover page and finishes on the 2nd cover page. It could be a printing mistake which came to attention later. However, it doesn’t affect the quality of the article.

Here are two quick links for you to know more about Vijayanagar empire.

Do we know that why a giraffe has such a long neck? Well, based on the theory of “survival of the fittest” the basic idea is there. But, how is it possible biologically? Does such a formation of the body (of giraffe) is ideally possible? Well, there are many basic rules of biology which tells otherwise. So, yes, the perfect answers are almost unknown.

Digambar Vyas comes with an interesting article on the theme of these questions. And the article is spread over in 9 pages! A very intriguing and nicely written articles. We must say that Digambar Vyas succeeds in finding the way to balance the information and interest altogether.

As the football fever has caught a lot many game lovers, how can we skip it? Well, Digambar Vyas probably has thought the same and came up with an interesting article in which maths and the game of football are weaved together.

The article is comparatively small but interesting. It will walk you through the steps of Maths and Science to look at the game of Football. A nicely written article. If you are a football lover, you shouldn’t miss it.

In addition to these articles, there are some interesting segments like Q/A and Fact Finder, Quiz etc. And, none of them should be missed.

Definitely a worth reading magazine by all means. The only downside is, it is written in a region language making its reach limited.