It is said that the knowledge is the new currency. Actually, the knowledge had always been the universal currency since ages. It is up to us how and when we are able to truly recognize it.

Considering it, we always try to read knowledge magazines and publish our genuine and unbiased views and reviews for the same. Of course, it would be unfair to just say the product is bad or good and give it 3, 4 or even 5 stars, considering the efforts of many people behind making the product what it is. Reviewing a product is easier than conceiving the idea of the same and bring it to the life. At the same time, there are tonnes of papers published every day in the form of books, newspapers, magazines and in other formats. Considering the shortage of time we have, it is impossible to read all them and each and every subject doesn’t interest all. That is why genuine and unbiased reviews about a media are quite important. It helps the interested ones in making the purchase (or even reading) decisions more effectively.

Let us start the magazine reviews for the year 2018, with the January 2018 issue of Safari – a knowledge magazine in Gujarati from India. 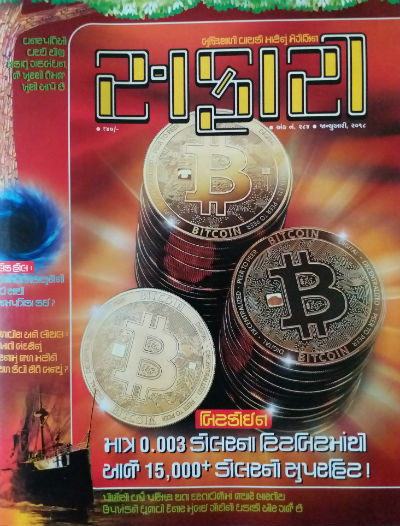 The cover page of the issue is really attractive and intriguing. A stack of BitCoins with a title suggesting a detailed article about the same inside is really appealing. I am sure that many of the young enthusiasts and investors are curious to know more about BitCoin, and some might be planning to invest in the same as well. They will surely pick this issue to get the authentic information about BitCoin. The cover page is interesting in terms of Information and color scheme both.

The editorial and reader reactions:

We have mentioned the importance of the editorial in any magazine or for that matter in any media as per our vision in many previous articles, so I am not going to repeat it. But, yes, the editorial definitely provides a chance to connect the editor with the readers directly and express his/her vision behind the issue and content of the same.

What you will keep with you after reading the editorial are the following lines:

These are the lines of Shaheed Bhagat Singh who was hanged to death along with another two more patriots of the same regard Sukhdev and Rajguru. I want to ask you to frankly analyze the current political and social situation in India and find an answer yourselves whether we are able to create such environment even after 70 years of Independence. What you will find shocking in the editorial is the fact mentioned in it, that official Bhagat Singh, Sukhdev, and Rajguru are not officially awarded as Shaheed!!!

Usually, we don’t talk about the “reader’s reactions” which the magazine has received for its previous issues. But one reaction in this issue makes me talk about it. It is when a reader went to a bookstore to buy the book “Aa Chhe Siachen” (This is Siachen – Gujarati version) the person at bookstore considered the book as a book about China! How ignorant are we? It is saddening, of course.

Also the discussion (as the reaction is responded as well) about whether the Safari team has a soft corner for the current government. The points raised by the editor are logical and should be considered before considering Safari team is biased towards this or for that matter any government. Actually, the editorial of this issue proves that it is reflecting facts and publishing the same. Of course, I am not here to fight the case in favor of the editor, but, this is something which needs to be brought in-front, as we review the magazine as a “knowledge magazine” and the knowledge cannot afford to be biased.

The theme article of the issue is about BitCoin, a “Crypto Currency”. In short, BitCoin is a virtual currency and any currency is as strong as it is widely acknowledged. Some countries are accepting it’s existence and acknowledge trading by the same while the others are not. Some countries have decided to consider the conversion of BitCoins into any currency (Eg, INR, USD) as a Capital gain and thus levy a remarkable tax on the same. It affects largely to one of the core purposes of such currencies. Also, there is a huge suspense about the person(s) who has/have invented BitCoin. Well, the one who’ve invented it certainly holds a large number of BitCoins, and eventually, he/she need to convert it into any regular currency. While such a huge transaction cannot remain unhidden from the authorities and eventually the person behind BitCoins will not remain undetected.

[A video by Austin Evans, explaining “What is a BitCoin?”]

The article is written nicely and is long enough to provide most of the information. I think that it still has some points written which may found tough to digest by the readers. The readers are expected to read a few points more than once to understand them better. It is definitely worth reading article. Such informative articles are not available, especially in regional languages. When more and more countries, including India, are making their stand clear about BitCoins, it is an on-time article.

[RajyaSabha TV – Talking about BitCoins, recent activities in the area, and Finance Ministry of India’s views on the same]

The day of April 14, 1944, is written as one of the most tragic days in the history of Mumbai (then Bombay)’s Victoria deck. A ship named “Fort Stikine” loaded fully with ammunition and Gold plates was blasted with so much integrity that Ho Chi Minh (then Saigon)’s seismic lab (which is located at around 3730 Kms from Mumbai) noted it as a possible earthquake in its records!

Here are some of the public domain videos available on YouTube regarding that tragic event:

This incident was covered in a magazine named “Flash” in a series of articles by famous Gujarati author Nagendra Vijay. As there is a lot more information available about the incident through various sources including documents, statements of the people who survived or witnessed it, investigation reports and other; Nagandra Vijay has decided to rewrite the same thriller by including this new information. The first segment of the series is available in this issue. It is very detailed and written in really interesting manner. Related photographs, maps, and illustrations are included to enhance the reading experience. I recommend you to read this article and watch out for the future issues of Safari for upcoming segments of the same.

While it was not so ancient as mentioned in the title above, the Dholavira civilization was from the time of Harappa and Mohenjo-Daro times. Located in Gujarat state of India Dholavira is considered as one of the most remarkable sites by the Archeological survey department of India. The remains of a well-planned and well-facilitated city found at Dholavira talks a lot about the “way of living” of the people there during that time.

Dholavira and Khambhat both were ports at that time and the huge rivers were used as a travel-line those days. What possibly could have happened then, which resulted in the loss of these cities and civilization?

Digambar Vyas comes up with an interesting article studded with well-researched facts and analysis trying to answer these questions. Digambar’s research is remarkable. And the article is presented in a really good way. You should keep looking at various maps provided in the article while reading it, to understand the things in better ways. It is definitely a good experience for me to read the article. While we do not and should not stop admiring efforts of the historians in other countries to find the facts about the older times by analysing remains available these days, we must not skip doing same for the stuff available at our own land.

Those who love archeology and interesting in exploring history will find the article more interesting but I will recommend it to everyone.

Other segments worth reading:

The FacFinder segment is a Q/A segment where some of the interesting questions by curious readers are answered in interesting ways.

An interesting article about how to “architect” the plants and trees to become something usable, talks about the subject I have read about for the first time and found worth reading.

The information about the “Goldfinger Ants” will amaze you. It will also pin-point the way the truth turns into myth and then fiction.

I will suggest you to not to skip any of these segments.

Definitely a worth reading issue which gives you the maximum return for the money and time you spend on it. A recommended read. The only limitation is, it is published in a regional language, thus making its reach limited.