Allow me to Introduce John Michell, the author of “The Lone Wolf At Cover” – an adult spy mystery thriller.

To know more about the book you can read our detailed review for the same at:

John lives in Brisbane, Australia and “The Lone Wolf At Cover” is his debut book. He, however, weaved international relations and how the personal lives and emotions of a spy (and people associated with him/her) often take a backseat in the call of duty moments. 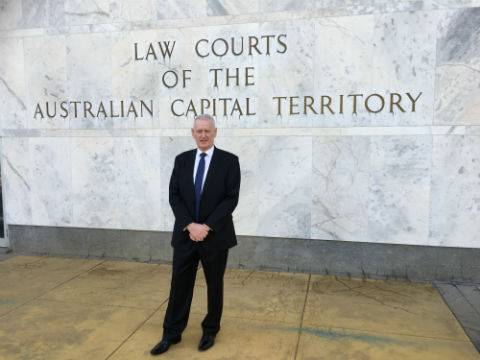 John Michell – Author Of The Lone Wolf At Cover

Reading the book made us curious to know more about him and thus we approached him for the possibility of an author interview. Fortunately, the things worked out positively and from our team, I got a chance to have a small Q/A session with him. I would love to share it with you all.

Greetings from team ThinkerViews…!
We are glad to have a conversation with you. Thank you for sparing some time to have a Q/A session with us. Your book “The Lone Wolf At Cover” is getting positive responses in both commercial and critical aspects since a while. It is a nice book indeed. Please accepts our congratulations for the same and tell us something about it (the response to the book).

It’s a Cold War spy fiction novel with a difference. The story of a flawed man in a flawed world, giving it a realistic flavour. Put it this way, it’s not a James Bond book about an invincible hero who’s irresistible to women!!!i

It is a kind of cliché question, obviously, you are feeling joyous, accomplished and happy. Each time we are able to follow our passions the way we want to and getting a positive response on the course, we feel, inching more towards completeness. Do you think so?

I think your adjectives are probably a bit strong, although it obviously depends on individuals and individual circumstances. I think the best description in my case is satisfied

Can you tell us more about yourself, your background, your profession, and your passions?

I was an Australian diplomat for 33 years and then studied law (gaining a Juris Doctor – I’m still admitted as a barrister and solicitor to the Australian Capital Territory Supreme Court). Since January 2017 I elected to become a full-time writer.

What draws your interest in writing?

In both diplomacy and law there is a significant writing dimension. And it was the writing element in my professional work I found I consistently enjoyed most. I liken writing to sculpting.

Can you tell us how the idea of writing “The Lone Wolf At Cover” conceived?

I just love the Cold War spy fiction genre. So that’s what I decided I’d write about drawing on my experiences when living abroad as a diplomat (for 21 years in all).

Can you tell us about your choice of the genre? Actually, we’ve often seen authors mostly go with something related to their jobs, especially when it comes to their debut work. Ravi Subramanian, for example, writes banking thrillers. John Grisham explores legal thrillers and so on. Of course, there are authors who write fantasy fictions or mythology retelling which are far from their area of profession. We just want to know about the reasons behind your choices.

Like I say, I love the genre and the politics and grit of the spy book (in fictional novels at least – I have no real insight into the real-life situation. I’m betting though if I did I’d find it very different and probably more anodyne.)

Getting your first book published is never an easy task, unless, of course, luck is at your side. Can you share your journey from writing your book to get it published?

Never a truer word spoken Jiten. But I’m hopeful. It’s a crowded market place and more and more people are self-publishing. I’m not foolishly confident or over confident but I do believe that if I can get a break and The Lone Wolf at Cover gets profile (as with the second novel I’ve just completed called Dublin Zoo) there’s a large readership around the globe who would appreciate it.

You are exploring international markets, and sometime the response might be different from what you’ve expected. Can you share us about the response you’ve got so far?

Frankly lukewarm. But it’s all about exposure. In truth I haven’t really tested either the domestic (i.e. Australian) or international markets because relatively-speaking very few people know about the book. That’s where people like you come in it!!!!

Writing a period drama which is based on international relations and referring some historical incidents is not an easy task. Though you are writing fiction, you need to do a lot of research work. Can you please share details about the research work you’ve done for the book?

Look, a lot of the international affairs stuff I knew about already. For example, I have followed Zimbabwe’s birth, pre-birth and subsequent existence quite closely. I’m not sure why I find it so fascinating but I do. It was really just a matter of checking a few dates and things like that. The Falklands was similar in that I knew about it and Argentina’s use of Exocet missiles. And of course, the situation in East Berlin was also something I knew about. Ditto for Konfrontasi in Kalimantan. And I was living in Moscow when the Soviet Union collapsed. So it was really about refreshing memory rather than straight out research.

These questions are intended to serve as a guideline to the newcomers and arm them with the knowledge of what to expect and prepare with better mindset and resources, rather than discouraging them. Can you tell us more about your writing regime? Are you a method writer or an impulsive one?

Definitely impulsive. I’ve tried planning but hate it. I sit in front of the keyboard get an idea and start writing without knowing where I’ll end up. That means there’s a lot of fine-tuning once you’ve a draft!!

All the characters and incidents in the book are dear to an author and asking him to chose a (or a few) favourites from the same is not so welcome. At the same time, we personally love some stuff over the other. Can you please share the incident(s) you enjoyed writing more than the others in this book (of course, you can skip those which involve spoilers)?

It varies a bit day by day. But overall I think writing the Rhodesia/Zimbabwe stuff was the most enjoyable – I hope I didn’t get carried away and write too much.

Can we see John writing a book/books in other genres? Is there a book already in writing? Can you tell us something about it, if so?

Yes, emphatically yes. My second book Dublin Zoo that has just gone up on Amazon is a bit of a departure. But at this stage my plan is for my next effort to return to the Cold War spy fiction genre.

The book cover plays an important role in bookselling, were you involved in the book cover designing process? How much?

Did it on Amazon for the paperback, using Amazon images, and had a guy in the UK help me on the kindle cover (at a cost of course) – the one that you’ve addressed in your review .

Every book affects its author in some way. How do you think writing “The Lone Wolf At Cover” affected you?

Hmm… Not sure how to answer that. Look, I think I’ll say the effect of writing it has been to make me frustrated. Not because of the book per se but because I don’t think the book has yet reached the audience it deserves, and doing that is proving much harder than I thought it might.

Who are your favorite authors whom you love to read?

Le Carre is the master and Len Deighton fantastic too. Larry Mcmurtry is also someone I’ve loved. And I also enjoy Leslie Thomas’s humour.

Which are the book(s) you are reading currently?

What are your hobbies apart from writing?

Sport. Cricket (watching these days) for example. You’ll see the title in the Lone Wolf at Cover derives from John Arlott‘s commentary on the sport. I also run. But my knees are just about cooked so it’s unlikely I’ll be doing that for much longer.

What do you think about video trailers of the book(s) which are an almost inevitable part of marketing these days?

Yeah, I think so. But you know, it’s probably beyond me. I need a young gun like you to do that sort of stuff for me!!!

What is your opinion about EBook readers and their impact on the generation overall?

Well, I keep getting told it’s the direction we’re headed in. Maybe, but I would say that most readers I know prefer the hard copy.

Do you love to read traditional printed books more or Ebooks?

Traditional. I’ve never read a book on a kindle (dinosaur I hear you think).

What are your opinions about various social networks and the way it can be used to spread awareness about some important cause around the globe?

I see it a bit chicken and egg. If no one knows you why would someone in New Delhi read my post. Before social media is effective you have to be known. Then it’s the ant’s pants. Ask anyone with a profile like an actor or world leader. They have zillions of followers they couldn’t reach otherwise. Put succinctly, it can be a force for good or evil. Something governments everywhere are wrestling with I suspect.

Please share your social media/web presence, so readers can connect with you.

Please share anything you want to from your end?

I would encourage your readers to give my books a try. Sure they’re not for everyone but for people who love gritty politics, realpolitik and realistic romantic encounters I think they’d be fulfilling.

Let us know that what do you think about this Interview session? Do you want us to ask anything else to him on your behalf? Do let us know. Also, let us know which other authors you like us to interview? Do let us know your thoughts and remarks via comments below. Do not forget to share this article with your friends over various social networks via Twitter, Facebook and others. And yes, you may like to subscribe to our RSS feeds and follow us on various Social networks to get latest updates for the site to land right in your mail box.

Previous: The Last Hun – Forbidden Tale Of King Mahira: The Most Brutal Man Who Ever Lived By Ashwin Razdan | Book Review
Next: An Interesting Author Interview With Nupur Chowdhury