How often do we wonder that our lives are largely products of luck rather than our conscious efforts? Especially, if you think about all the major life changing moments, so often they are just a combination of being in a particular place at a particular time, which can lead to making or breaking of us as human beings.

No matter how much vocational counseling is out there, the work that becomes a big part of our adult lives, the career we choose is very often a product of someone else’s advice and choice and once we are into it, we follow it through and it directs the experiences we gain.

For people working in the world of foreign service and diplomatic offices, the work takes them around the world with exposure to different peoples and their cultures providing them with a kaleidoscope of human nature.

We have come across many authors who come from a diplomatic service background and have turned their experiences into bestseller books e.g., Vikas Swarup, Late M.K. Dhar, Ian Fleming, Frederik Forsyth, etc. Recently, we discovered another such author – John Michell from Australia.

John Michell worked for Australian Foreign Service from 1979-2012, and during his tenure, he spent 21 years abroad on postings at Washington, New Delhi, Port Moresby, Moscow, Solomon Islands, East Timor, and Trinidad and Tobago. Naturally, such dignified career includes a lot of experiences both in the light and dark sides of government machinery and so when he took up the pen, he chose to capture it in form of a spy fiction book set in the cold war era.

This first book by John Michell is called “The Lone Wolf at Cover” and was self-published by him. On behalf of team Thinkerviews, I had the opportunity to read it and share my thoughts on it.

You can find the link to this book at:

The book cover plays a very vital role in the success of the book-sell, as it is this first image which attracts the browsers to pick up the book and decide whether to buy it or not. 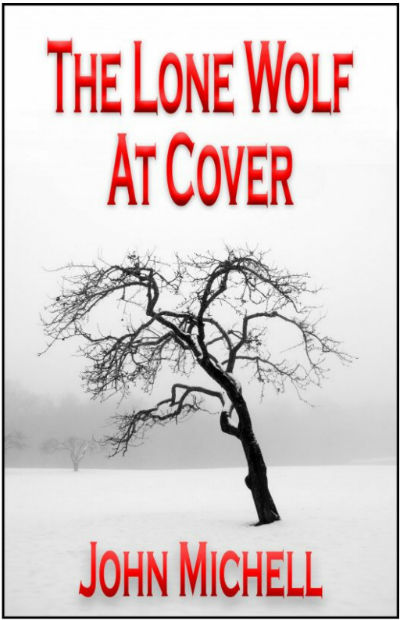 The Lone Wolf at Cover by John Michell | Book Cover

The book cover shows a tree that has lost all its leaves, symbolizing autumn of life, on a white expanse where no other living creatures are visible. As you read the book, you’ll find the symbolism of this cover page and how it connects to the central theme. However, purely from the first impression, it is elegant, but minimalistic and could use re-design to show the complex world that exists inside this book and the human interest story it covers.

We meet protagonist Joseph Lambert, while he is in East Germany, on the first real mission of his spying career, trying to make a drop for a man named Konrad. The drop includes travelling documents that will allow Konrad to escape. However, nothing goes as per plan and Joseph is called home in face of a disastrous failure. Looks like his career is over before it really began.

However, he survives this fall. And we learn about his past life including his birth, growing up in very modest lifestyle and education at a later age compared to young men from privileged backgrounds. He lands a job with British intelligence service only due to the Labor government in power requiring the administration to bring people in from “outer-reaches” of English life. This one chance recruitment determines his career and his whole life.

Joe spends first few years with Service in backwaters of Russia, until another chance gives him his first real mission – Konrad. In the aftermath of this failure, he receives a posting in Far East (Malaysia -Indonesia) – where he slowly grows up and has a successful recruitment on his books when he finds a KGB agent called Boris. It is also here that he meets the father figure of Nought, who gives him important life lessons about how to approach his career and to beware of its pitfalls.

Joe learns the ropes and is now obsessed with making a success of his career. He comes back to London after his Indonesia posting, marries Kathleen in a marriage of convenience and moves slowly but surely on the rungs of promotion ladder. His second break also comes in the form of a Russian agent called Katya. Needless to say, after a few months of working for British SIS, both Boris and Katya lose their lives.

Years go by, Joe gets posting to New Delhi. Here his marriage with Kathleen falls apart. He has moderate success with one Bangladeshi spy. His personal life on the other hand improves beyond measure when he meets Agnes and falls in Love for the first time in his life.

But as Luck would have it, wheels are in motion for a bigger conspiracy than Joe can imagine. As he is called back to London after his posting, Agnes is killed. In the grief and thirst for revenge, Joe embarks on a downward slide that is going to destroy a lot more lives in its wake than he could have ever dreamed of…

The quote at the opening of the book seems to sum it all up so accurately:

Don’t depend too much on anyone in this world because even your own shadow leaves you when you’re in darkness.
Ibn Taymiyyadh 1263-1328

As you can see above, this is a story spread over almost fifty years of Joseph Lambert’s life and mostly featuring his twenty-five year long career with the British SIS. It is a complex world inhibited by characters that belong to Russia, Asia, Europe, India, USA and the author does justice to all of them, highlighting their ideologies and thoughts while providing accurate background of the respective country and its culture. John Michell does a brilliant job as Joe moves from country to country to give the reader enough background of the landscape without losing the thread of the story.

He uses multiple narratives to keep it all clear for the readers while dealing with different timelines and once I was in the chapters where the main Russian conspiracy starts, I could not put the book down without reading to the end.

And I think that is the most admirable thing about such works – the breadth and depth with which it explores the way the Governments run – especially its world of administrators and bureaucrats that we hardly ever think about, except when they make the news stories due to something going wrongs. These are the hubs and spokes that keep the gigantic machinery going on a daily basis and although there is a lot to be said in favour of it as well as against it, sometimes you need to be in the system to understand it. As John Michell writes from his personal experiences, there is an air of authenticity with which he describes diplomatic lives and events.

The book has a lot of knowledge and information quotient as it highlights lesser known crisis situations around the world – like Moldova, while giving more background information about well-known stories including the revolution in Rhodesia, struggle in Falkland islands, Indonesia – Malaysia relations and Konfrontasi, etc. And this nicely adds to the entertainment quotient of the book. The time you spend on reading this book will leave you with a bit more knowledge of world politics than before.

There are authors who have achieved legendary success with describing the Western Intelligence Agencies just by delving into the procedural aspects of such works – John le Carre and Len Deighton are the inspirations that John Michell mentions in his introduction to the book. And although I could see similarities in style, as I also happen to be a fan of those authors (George Smiley books, The Looking Glass War, SS-GB), John Michell has his own style that is equally enjoyable.

The title of the book will intrigue Indian readers as it draws from a metaphor from the game of Cricket. The year is 1968, and Joe is enjoying commentary by BBC broadcaster John Arlott:

John Arlott and his evocative language using the term The Lone Wolf at Cover to describe a solitary outfielder left to petrol a large swath of the playing field while rest of his teammates all hovered in the infield. Cover being the designated position on the cricket field and not a reference the spy’s perennial preoccupation.

And, of course, it is a perfect metaphor for a career where you cannot talk about what you do with anyone, where you always have to keep your cards close to your chest and where this secrecy slowly destroys your life…

Spying destroys us if we allow it. A total obsession with the black arts for too long will always lead to isolation and moral incompetence. One day we wake up and we’re social outcasts; devious bastards unable to separate right from wrong, condemned forever to creeping alone across life’s outer fringes.

As you can see from above snippets, this book is not an attempt at glamourizing the life of real-life spies, which involves a lot of legwork and lucky breaks, rather than high octane fuelled car chases and impressive hand combat of the filmy spies. But it also establishes the moral pitfalls of living a devious life, where, in name of patriotism you put up with immoral practices and stop caring about the lives lost in the process of obtaining information, including collateral damage. The book achieves all of it through a human interest story rather than a non-fictional account pointing out the rights and wrongs of the intelligence world.

It appears John Michell has achieved his objective perfectly, while also giving us a well-written book.

There are some instances in the book, which could use editing and re-organising, but for a long, complex story, it only affects the presentation rather than content. The real thrill and chase of the hunt are more prominent in the second half of the book, while the first half builds the premise and the background introducing the characters for it.

All in all, we liked the book, and can recommend to all readers who enjoy the stories of the shadow world of spies based in the day-to-day reality…