Home / Books / The Last Hun – Forbidden Tale Of King Mahira: The Most Brutal Man Who Ever Lived By Ashwin Razdan | Book Review

The Last Hun – Forbidden Tale Of King Mahira: The Most Brutal Man Who Ever Lived By Ashwin Razdan | Book Review

LeadStart Corporation is one of the leading publishing houses in India. When they have approached us informing about a book named The Last Hun – Forbidden Tale Of King Mahira: The Most Brutal Man Who Ever Lived by author Ashwin Razdan, we took no time in accepting the book. The book, however, remained in our to be read list for a long time as there are many books awaiting their turns were already there.

The title of the book talks a lot about the story it explores within. And, that is what makes it very intriguing. So much is written about various invaders and their invasions in Bharat (India). However, very little is found about Huns.

Mostly, one could have heard the word “huns” during his/her history classes in primary school. I am not sure about the detailed specialization course in history including Bachelor, Masters and other degrees, but, otherwise, the references are quite rare to find.

Frankly speaking, the names of Mahira, Toramana, and others are quite new for me also.

Before talking further about the book, let me share with you that the author refers “Rajtarangini“, an incredible book by “Kalhan” (aka Kalhana), in his sources of reference and research work. Rajtarangini is not very famous or popular in a broad context, but, it is referred by many scholars as one of the oldest and authentic sources to know about Kashmir – the heaven on the earth. Of course, the people with their roots in Kashmir know a lot about Rajtarangini and Kalhan. The author has not only referred Rajtarangini in the preface but also ended the story with the reference of the same.

Being a gateway to the fictional world explored within, the cover page is one of the most important parts of the book as it is responsible for the first impression of the same and thus can surely influence reading and/or purchase decisions.

The cover page of the book is dark and it goes in sync with the title (and the story). 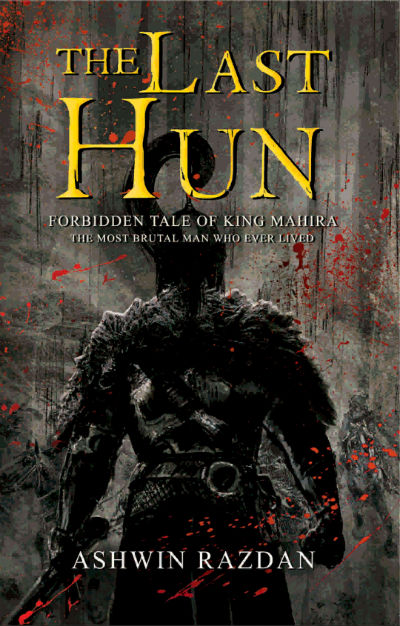 The Last Hun – Forbidden Tale Of King Mahira: The Most Brutal Man Who Ever Lived By Ashwin Razdan | Book Cover

The faceless illustration of a giant warrior ready in full war gear with a sword in a hand represents the character of Hun king Mahira quite well. The red spots represent the blood of the victim(s) but it doesn’t look that effective.

Overall, a cover page which is in complete sync of the dark theme and brutality of the main character, but it surely could have been better.

The story explores the time when the Hun king Mahira has decided to take on the Gupta empire. Living in his own castle in a well planned city, where he was the artists, sculptor, and most importantly the owner of all the resources; Mahira is a ruler people feared about. They always live under the tension and cannot determine which of their moments will be their last!

If Mahira like a horse, he gets it. Consent of the original owner?! Well, who cares? And who dare to ask him about any of his actions. The only person who has the maximum access to Mahira was his wife – Sitoi. But, she also needs to keep a distance with him. She can advance only when Mahira approve her actions.

Mahira is a tormented person. Despite being a skillful warrior with the natural ability to develop war plans and execute them to his benefit, Mahira is not a satisfied person. He has demons within his mind which keep disturbing him through the night, or during the time he get relaxed.

And during these fragile moments, queen Sitoi also receives the pain from him, and can observe the pain Mahira himself is passing through.

His growing up days made him what he is today. His father Toramana taught him to be a brutal, merciless ruler. He strongly believed that it is better to be feared than being loved! In fact the book mentions the quote:

That it is better to be feared than loved, father. Many loved Buddha, and yet, all he became was a teacher. You, on the other hand, are a King and the ruler of many. You have the ultimate power over life and death.

One day, when he came to know about Shiva (Lord Shiva) the creator and destroyer, he was influenced by the lord. How the tale takes a turn from here is important to read rather than talking much about.

The book explores a dark period and hence the book is a little heavy read. The book is historical fiction and as a very few details are available about the Last Hun – Mahira, the fictional part could have been more.

The author has already mentioned that his intention is to explore the history, not only from the victor’s perspective. Reading this book has reminded me of the following book by Mala Mukherjee.

I consider this book a psychological thriller more than anything. The way the author has explored the tormented childhood of Mahira and how he became a ruthless leader is commendable. The author’s vocabulary is also worth taking a note about. The prime characters of the book are Mahira, Sitoi, Jasbir, Monk, Shiva, Buddha, Gupta dynasty, Baladitya, Shahrose (horse), Toramana and others.

The book is strictly for adult (especially mentally) readers only. Be it the hunting scene or the way Mahira deals with a Buddhist monk; they are brutal. The way the citizens of Mahira’s kingdom feared by him is nothing less than inhuman. It is not a light read, and at the same time you can feel how tough it was for the author to pen it down.

Jasbir’s love for animals, Sitoi’s concern for her husband and some other stuff serves as a shadow during the hot summer afternoon.

The book has some wisdom lines too. Here is an example:

Wisdom is simple, but difficult to attain, and happiness even more so.

He felt that if he continued to stand still, the King would forget him and call off his training exercise, whereas, if he moved, he would certainly be punished.

Reading such stuff makes us realize that life is not fair with everyone, and the freedom to do what you wish is something we shouldn’t take for granted. In fact, Sitoi’s character reflects the same.

The author is good at wordplays. And, most of the references he mentions are about pain and/or death. Here are some such examples:

Mahira remained still as a corpse on the battlefield.
— — —
The lion roared in pain, the sound resounding like wall of water released into a deep ravine.

The same can be seen even when the author is talking about a situation and surroundings.

Winter here is an animal, son, like a great cat, busy feeling! And though it might seem slow and fat, it will still kill swiftly, without mercy.

Here is an example of the behavior of Mahira with a king he won over, which re-inforces the tagline of the book:

Every arrow struck home. When they were done, the king was nothing more than a red porcupine in a pool of his own blood.

This shows the tragic side of life in simple words.

The brown-black animal that had carried a King till a few moments ago, followed behind, forgotten, led by a rope around its neck.

It conveys a heart-breaking yet important lesson for life – You are important till you are useful and there is no better alternative available. The author is good at conveying his message in a few words. For example, what can better describe the environment and livelihood circumstance under Mahira’s rule than the following line?

Sagala was nothing if not a city of survivors.

The idea behind quoting the content of the book is to show you the actual writing without including spoilers. It should give you a better and unbiased idea about the book and what you should or should not expect from it.

The book has a couple of spelling errors, but you can ignore them if you like reading dark thrillers.

The way the author has merged the “historical fiction” genre with “psychological thriller” is an interesting aspect of the book.

The book is not for light reading. A mature-reader who loves to read dark psychological thrillers can enjoy it. These days, we see the majority of reader/viewers like – Game Of Thrones – and they will welcome this book too.