First published in October 1914, Shatranj Ke Khiladi (The Chess Players – शतरंज के खिलाड़ी) is one of the magnum opus of Munshi Premchand which took his fame to more heights.

It is worth to note that Munshiji was not only a prominent writer with good command on the pen, but he used to write about what is happening (or happened) in the society. Most of his literature is thus associated with grounded reality. Probably this is the attribute of his stories and books which made them more popular (and on the contrary, some people who love fantasy writing or read to get entertained, may not like these books/stories that much).

Most of the social problems Munshiji have explored, and sometimes took a satirical look on, belongs to harsh reality, which is not easy to digest, but evident in our surrounding.

शतरंज के खिलाड़ी – is a little different in that manner.

Rather than talking about the social problems as the theme topic of the story, he talks about political stuffs. 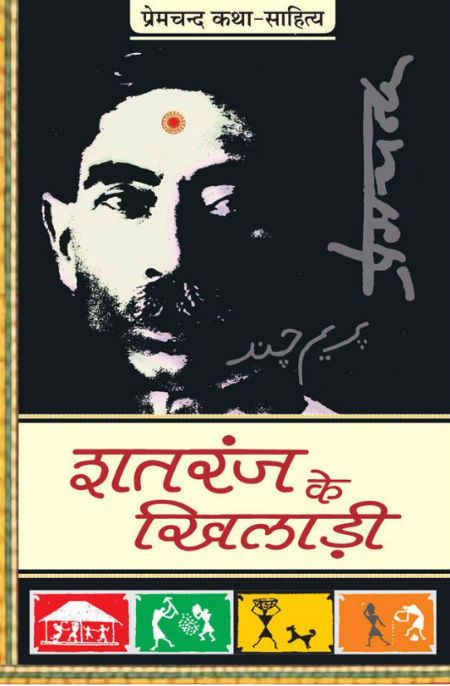 Well, we all are often talking that India (aka Bharat or Hindustan) is a country of more than a 100 Crore people (well, it was much less in the times we are going to refer now, but it was remarkably large at that time also), then how and why the invaders collect the courage to attack this country with the purpose of looting it or establishing their rule here!?!

Of course, it is due to the negligence of people from the very land. As rather than being united as a country, kingdoms were worried more about their own boundaries and benefits. There is nothing wrong in that. However when larger stuff is at stack it requires greater level of retaliation. Also the traitors always play an important part in the defeat.

We however are not going to talk about those wrongs. We would rather keep our focus on negligence which leads to incompetence – as explored in the book. The only thing to mention is, we should learn from the history.

The book is focused on two main characters, Mirza Sajjad Ali and Mir Raushan Ali. They were aristocrats of small part of the kingdom of Avadh which was then ruled by Nawab Wajid Ali Shah. They have had enough wealth, so they do not need to earn. Since early age they have developed the hobby of playing chess. And, who would be free for them to play with, rather them themselves. So they bond into good friends (who sometimes turns into foe, for limited time) and challenger of each other in the game of chess.

Their love for chess and negligence towards rest of the stuff failed them to fulfill their duties towards society and even their own families!

They made themselves blindfolded towards everything else, and even ignored summonses from Nawab himself. British rulers were able to perform annexation of the kingdom. And they both remain mute spectators of the fall. They don’t even have courage to visit their own city! The end of the book is tragically realistic.

The fictional incidents of the book may belong to 1856, but they are written so convincingly, that you will definitely like to consider them as real stuff. And importantly you can relate those incidents to today’s time as well. There are many places and/or people (or a fragment of a society) found behaving like the protagonists of the book.

What you love the most in the story is flawless writing. It moves ahead so smoothly by developing the curiosity. You hope that the soul will wake up in the protagonists. At the same time you know what is going to happen.
The domestic lives of the protagonists is depicted hilariously in satirical yet realistic manner. Even the readers who cannot relate to those time, will also be able to connect to it. The writer have fantastic command on Hindi language, at the same time, he knows how to write it in a way so a layman can read/understand it easily.

Other good thing is the plain Hindi meaning written along with some jargons, when used in book. It makes the reader to understand those words/phrases quite easily.

The surrounding are explored quite nicely. You will be able imagine the stuff mentioned there, because of the detailing given. At the same time, its not too detailed (which otherwise could have made the book boring).

You may expect a longer story here though.

It is worth to note that ace film maker Satyajit Ray made this story into a Hindi film titled – Shatranj Ke Khiladi. The movie was a critical success and even won the National Film Award for Best Feature Film in Hindi.

We got the book at a good deal price at Amazon, so it was more than value for money for us.

It is good read, which sends a strong message in quite satirical and easy way. You should not miss it.

What do you think of this book? Did you get a chance to read it? Or are you planning to read it (again)? If you are interested in works (Movies / TV Series) based on works by Munshiji, you would like to follow below given links.

Do not hesitate to share your thoughts about this article via comments below. Do you know anyone who will enjoy it? You can share this article with them via Facebook, Twitter, Google Plus or other Social Networks.