Amish Tripathi is back with another book – Scion Of Ikshvaku. This time he tries to explore the tale of Lord Rama in his signature style. In order to make the things more contemporary, he tries to humanise the mythological character. 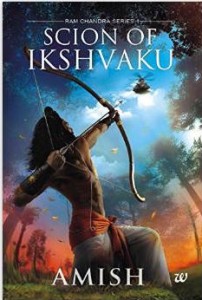 A lot of incidents in his books are explored in his book as they are supposed to be happening in not so ancient time, with a cover of modernisation on the same. And he is quite good at it.The reader’s reactions to his early books

are quite evident of the same.

The book is written in a way that the first chapter explores the events which make sense at the end of the book. In other words, if your want to read in linear manner, the first chapter should appear the last. The first chapter however creates curiosity about what to expect in the coming pages.

Raavan’s character is explored in quite different manner (than the traditional way). It is worth to note that as per the original Epic he was a scholar, brave warrior and exceptional devotee of Shiva. He was able to overpower almost everyone he fought with and thus have developed arrogance as well. Raavan, in – Scion Of Ikshvaku – is a calm, composed, cunning and brave warrior who have expertise in war skills.

This book shows Raavan living in the time of Dashrath and even fought a war with Dashrath (as mentioned in the reviews of Chapter: 3).

Strong characterization of almost every important character of the story is one of the positive factors of the book. Like Raavan, Mathara is a strong character here too. It may come to surprise to many readers seeing Manthara as the wealthiest trader of Sapta Sindhu, who is influential to various key-persons in Ayodhya.

In Ramayana we used to hear a lot about Ram and Lakshman, even Bharat’s character. But a very little footage is given to Shatrughna’s character. This book tries to justify him. Here Shatrughna is a scholar who knows almost everything. He is very studious, curious and have habit of reading.

Bharat is a very charming character here and like all other young fellows, girls fall for him as well. He believes in liberated way of ruling. He is not keen of implementing rules and that too rigidly.

The love of Ram for the rules and discipline is explored pretty nicely. Almost throughout the book references to Ram and his ideal way of creating better society focuses a lot on discipline and following rules. He himself is so much obsessed with it, and feels that he needs to be exemplary and follow the rules. So he can ask the others to do the same.

Similarly Sita, an adopted daughter of Janak, the king of Mithila is a brave warrior and good administrator. She also believes in rules and discipline. At one place, Ram says (in a conversation with Lakshman) that he wants to marry a girl whom he admire with respect. And he found complete match in Sita. Thus making them a perfect couple!

Lakshman is strong-headed and a fearsome warrior. He is excellent in various tactics and in the course of the book you will find him creating “Lakshman’s wall” too!

Amish brilliantly adds reference to the characters and events from his past books. You will find the references of Arishtanemi, Malayputras, Nagas, Vayuputra and more. Of course the references to Mahadev (Lord Rudra) thus are inevitable.

The conversation about masculine and feminine way of forming/administering a society (civilization) is written nicely. The thoughtful readers will surely enjoy it.

The rift between Vashishtha and Vishwamitra (based on their ideological differences) is referenced as well. The characters of Asura dynasty are written from a different angle.

The pick point of the book however is the inclusion of the “shameful incident of Nirbhaya’s gang-rape case” effectively in the book. The character of Roshni – Manthara’s daughter – represents her. Roshni is a very beautiful girl who is even beauiful and pious at heart. She is good at medicines and she love to treat poor people freely. She was found tie-inng Rakhi to all four brothers (Ram, Lakshman, Bharat and Shatrughna). The main rapist Dhenuka is under-aged and hence as per juvenile rule he cannot be executed. This brings in ideological debate between Ram and others. Ram himself was traumatised and believes that Dhenuka’s crime is so, that he must be given death penalty. But he believes in following rules. It is resulted into increasing the dislikes for him in Manthara.

The exploration of this brutal incident and its after-effects will remind you of the recent incidents, making the book contemporary.

The exploration of wars and various forts, kingdoms and forests is a must-mention. The author seems enjoying to write about monuments and natural places. He is now having a proven expertise in writing war scenes and it is quite evident here.

The way author analyses the three queens of Dashrath, it is believable. He also justifies that how smart Sumitra made both his sons to support each of their step brothers. (Lakshman always took care of Ram and Shatraghna is a good aide to Bharat).

Overall Amish is able to hit the majority of targets.

Are there any misses?

According to us, the following points could have been better taken care of.

Why Shatrughna is spelled as “Shatrughan” in this book?

Based on the historical timings (as per the epics of Ramayana and Mahabharata), king Bharat, based on whose name, the country is known as “Bharat”, cannot have happen before the time of Ram, and hence Bharat couldn’t have been named after him!

Also, none of the popular Ramayana versions include a ‘Matsyavedh’ at Sita Swayamwar..The ‘shivdhanush’ broke while Ram was tying the string and that brought Parshuram to the swayamvar filled with rage. This bit is more from Mahabharata than Ramayana and doesn’t quite fit in the flow.

Why the country is named as “India” throughout the book? It is the name given to the country much later. The book justifies the reason that why it cannot be called “Meluha” (in the last segment of the book)? So it could have been referred better as Bharat or Bharat-Varsh.

The author rather than using some words/phrases from the ancient times, bluntly uses modern words (Eg. Doctor). He could have used some pure Sanskrut (Sanskrit) or even Hindi words here. If needed, such words/phrases then can be listed in glossary. Due to excessive use of modern stuff and mixture of it with ancient incidents, often we feel taking a jumpy ride.

Video trailer of the book
Some good pieces of writing from the book:

A leader must love his country more than his own soul.

Passionate children have strong emotions that insists on finding expression. They laugh loudly. They cry even more loudly.

How can the land belong to any of us? we belong to the land!

We criticize corruption in others, but are blind to our own dishonesty. We hate others who do wrong and commit crimes, blithely ignoring our own misdeeds, big and small.

A relationship is not just for fun, it is about truth and the knowledge that you can depend on your partner.

If you compromise the prospects of the strong and lean too much towards the interest of the weak, then your society itself goes into decline.

Giving a sharp sword to a child is not an act of generosity, but irresponsibility.

While you can certainly learn from the successes of great men, you can learn even more from their failures & mistakes.

Every emotion in the universe exists for a purpose, nothing is superfluous in nature’s design.

Your responsibility is great, your mission is all important. Stay true to it. Stay humble, but not so humble that you don’t accept the responsibilities.

The book is a good read, of course. It is marketed brilliantly and written in appealing style. Amish’ signature style of exploring and retelling mythological stuff is interesting. You need to read this book with open mind.