Posted by: Editor2 February 27, 2020 in Books, English Leave a comment

Do you love reading thrillers? We do.

Recently we are exposed to so many new authors who came up with a fresh plot and thrilling stories. I must add the name of Madhumita Bhattacharya in the list of promising authors.

As you all know, we at ThinkerViews always keep exploring various book stores (online and offline both) and online book libraries. A while ago, during one such exploration quest, we found Murder at the Temple by Madhumita available for free on Juggernaut Books. And, we have added it to our kitty.

Recently, when I got a chance to visit Saurashtra Book Fair 2020, I found The Masala Murder by the same author, there. It reminded me that Murder at the Temple by Madhumita is in out kitty since a while and now we cannot ignore it anymore.

Fortunately, from our team, I got a chance to read it, and I am happy about the same. Here are my personal and unbiased views and reviews for – Murder at the Temple.

Let us take a look at the cover page of – Murder at the Temple. 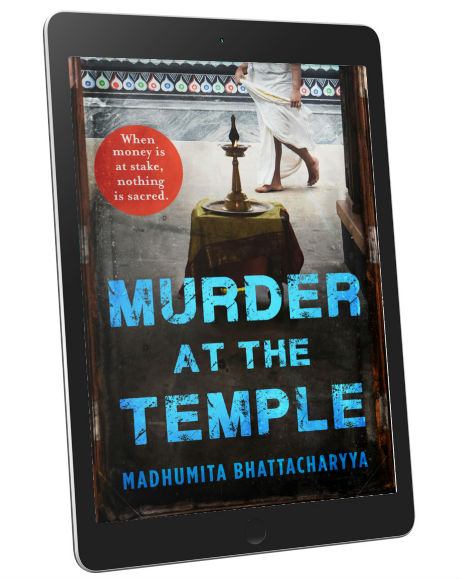 Murder at the Temple | A Thriller By Madhumita Bhattacharyya | Book Cover

A murder mystery is expected to have a cover page where blood makes its presence felt or having some shady background. The cover page of the book shows the things in a crystal clear view. It remains true to its title. The designer seems to have tried finding the most relevant image for the cover page and he found almost what he needed. The title in the blue color is readable and looks decent as well.

Overall, an interesting cover page where no violence is present, and yet, it is faithful to the book title.

The book starts with two incidents.

A young lady, Kavya, who is the trustee of a temple at a little remote area in India is en route to the temple. Her main concern was the announcement by the Indian Prime Minister. He has declared that from the very night, after 00:00AM, all the currency notes worth Rs. 500 and Rs. 1000 will no longer remain a legal tender. In other words, demonetization is announced.

The temple under her authority has a donation box fixed inside the sanctum sanctorum of the temple. Also, there was an event held in the recent past, so they seem to have collected some currency notes in Rs. 500 and Rs. 1000 denomination. The amount would not be much, though. She just wanted to check if the temple management and caretaker people have enough funds for the next few days for their functioning and day-to-day purchase. As the next few days are expected to be hectic when most of the people will join the queue to exchange or deposit Rs. 500 and Rs. 1000 currency notes at the bank.

When visited the temple, what she found was something unexpected!

The temple priest was found dead inside the temple and the donation box is flooded with demonetized currency notes. In fact, they are spread over in the inner area of the temple! And, no one at the temple has the slightest idea of either of these things!

Another incident took place in a metropolitan city.
Vivek, a business tycoon accompanied by his young and intelligent financial advisor (if we can call him so) was watching the same announcement on his Television! Did the announcement prove shocking for him? Is there any connection between both these incidents? Well, you need to read the book to know the answers 🙂

I must say that Madhumita has weaved “demonetization” quite interestingly in this thriller. Here is one of the official announcement video referred to the same, available on the public domain of YouTube.

Of course, this is not the only book where demonetization is referred. Popular author and banker Ravi Subramanyan also weaved the same incident in his latest thriller Don’t Tell The Governor. The context and the plot are quite different in that book. You can read our review for the same to know more.

Let us move focus back on Murder At The Temple.

This is the first book by Madhumita read by me and I found that she has done complete justice to the story and the genre both. The book has strong characters and we see their persona and perspectives both are elaborated in the way needed. While there are some characters appear for a very short time, Samar, Kavya, Vivek, Ramesh, Selvaraj, Babu, and a few others got the maximum focus.

While writing the characters the author remained focused on their importance and not their respective genders. I consider it as a big achievement of the author. It is not easy to remain gender-unbiased. We had seen many authors, including some prominent ones, either have the wrong idea of feminism or use abusive language and adult material, in the name of women empowerment. The female protagonist is having her vulnerabilities and she is not a perfect person. At the same time, she is courageous and competitive enough. The male protagonist is also having his positives and letdowns. Overall, the balanced approach made almost all the fictional characters coming out as real ones. Here is a conversation from book I would like to quote in the same context:

“Why are you here, Samar?” she asked, looking drained.
“It sounded like you were in trouble.”
“I am But I don’t need a hero.”
“No one who knows me would call me a hero. But it does look like you could do with a friend about now”.
…

The way the author has weaved the administration of a big company will remind you of Hindi movie Corporate. Money is a very important aspect of life, and when you give it more importance than it deserves, it becomes the driver. And, there is no limit to the wishes, they are endless. We have heard/read about many incidents/people/corporates following unethical practices when driven by the greed. The book explores those areas as well.

When you need to deal with many departments and seek favors from them, you need someone to find loopholes in the system and remain connected to the key people to get the job done. The author has weaved some simple yet effective lines to elaborate how corporates deal with the government machinery and officials.

He heard Vivek summoning Ramesh, the company’s all-purpose fixer who handled anything to do with the government or other purely unofficial official needs.

Some character-defining lines elaborate some important stuff in matter-of-factly tone. For example:

Don’t be emotional, Baby. This is a serious matter. Right and Wrong have nothing to do with it.
…
‘Not everyone will be as understanding as these cops, or me”…

The conversations in the book are quite like taken from the real life.

I like the way in which the author has weaved the incidents of the demonetization night in the gold-market. The book reiterates facts about gold and money which makes them a luring target even for the wrong people.

The book has some interesting oneliners as well:

Panic does not arise when you are so well prepared.

Questions can usually be averted as quickly as they are raised with the right inducement.

When the head of the house, who is more often than not, the sole (or at least main) earner, met with a tragic accident or death, the situation of the family takes a 180-degree turn. The author explores this fact effectively in this book.

The author used day-to-day language and she focused more on making it readable rather than showing her linguistic talent. It makes you enjoy the conversations in the book. Here is one for the reference:

I liked conversations about black money, greed, “undeclared income” and some other stuff. I am skipping to mention about many incidents and segments from the book deliberately. The main aim is to let you know the attributes of the book and at the same time, avoid as many spoilers as possible. But, I must mention this segment, as many of the readers will be able to relate with the same:

But love and disappointment were not mutually exclusive emotions, and that was why Vivek’s only child’s birthday was the backbone of all of his passwords and codes -including the one for the little safe that set in the cupboard behind his desk.
…
But what else could you expect from a man who had a file on his computer named “Passwords”, and didn’t even bother to password-protect it?

A large number of people do that. And, thus they become vulnerable to those who can use/abuse it.

Of course, there are many things in the book which could have been better. But, on the whole the author has maintained the pace and the quality both.

I would like to mention two segments from the book to conclude:

When money is at stake, nothing is sacred.

He had always wondered why people with so much also seemed to want more. Never having had much, he didn’t need much.

Just remember, satisfaction is the key.

Overall, a nice thriller where fictional incidents are weaved in a realistic manner. A short read. As we bought it when it was available for free, it is value-for-money for us.

The Murder at the Vicarage by Agatha Christie| Book Review

Previous: The Fragile Thread of Hope by Pankaj Giri | Book Review
Next: The Ways of the World by Robert Goddard | Book Review