Posted by: Editor February 29, 2020 in Books, English Leave a comment

In the world of thriller writers, Robert Gaddard‘s name carries a fair bit of weight and fan-following. Ever since his first best-seller Past Caring, he has continued to deliver excellent thrillers with multi-layered conspiracy theories outlined through intricate plotting.

Reading a Robert Goddard thriller is like travelling through a maze with a twist around every corner.

Everything remains transient even at the end with new layers revealing more and more of the characters as well as plots. We have read and admired his books including Caught in the Light, Set in Stone, Found wanting, etc.

In 2013, he published the first book in a trilogy set in the Europe of 1919, at the end of first world war – The Ways of the World – The Battle for Peace begins.

While it has most of the signature aspects of the typical Goddard thrillers, it also is a bit different in certain aspects and here are our thoughts on the book for you…

Let us take a look at the cover page. 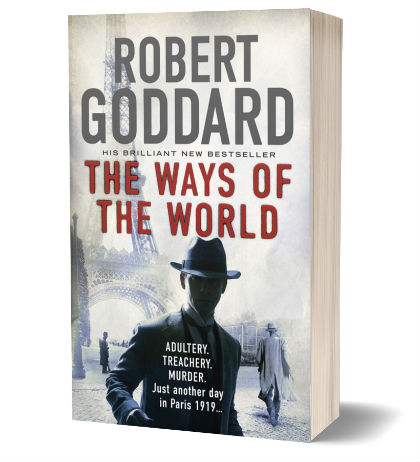 The Ways of the World by Robert Goddard | Book Cover

A person in a black suit and hat looking directly to the reader and you can see dissolving Effiel tower in the background. A typical outset which will represent you the protagonist and Paris (where most of the important incidents of the thriller happen).

The other version of the book has a different cover page. And that version has shades of yellowish-brown taking over as the theme. In that version, the protagonist is seen moving towards the tower in an almost similar layout.

Both the versions are moderately good, however, I like the above-shown cover page more than the other. The title text in cherry red with brownish shade looks attractive too.

It represents the tone of the spy thriller quite effectively.

It is the spring of 1919. Surviving the world war I against all odds as a fighter pilot and prisoner of war James Maxted is looking forward to a future with plans to open his own aviation training school on his ancestral estate in Surrey. While shopping for ex-air force planes with his partner Sam Twentyman, James – known to his friends as Max – receives a telephone call from his mother informing him that his father Sir Henry Maxted has died in a fall in Paris – in not so salubrious an area and under not-so-clear circumstances.

Max travels to Paris with his elder brother Ashley to complete the formalities and to bring their father’s dead body home. While Sir Ashley would not like even a whiff of scandal, Max will not accept anything less than a truth. But, in a Paris hosting the Peace conference that will actually be the end of the war, truth is neither an easily available nor such a straightforward commodity.

In succession Max meets Madame Dombreux – his father’s mistress (?), his Brazilian friend Ribeiro, Japanese policemen Kuroda and American opportunist Ireton, all the while trying to escape from British intelligence officer Appleby. He crosses paths with the Russian monarchist organisation called the Trust and its beautiful member Nadia Bukayeva. The only person he can trust in all this is Sam Twentyman who has travelled to Paris to help Max in any way he can.

With a new twist around every corner, Max can get lucky only so many times – He gets shot, recovers and is given a bit of help by elusive “le singe” (the monkey) while he puts a name to the elusive German spymaster who seems to be orchestrating these events – Fritz Lemmer. Lemmer is supposed to have recruits in each government and no one is sure who he is working for now that the defeated Kaiser is an exile.

Who is Lemmer’s mole in the British delegation? Will Max survive another attack by a very determined assassin in his own home?

And most temptingly, if he can’t beat them, will he join them?

The book is quite enjoyable and reminded me more of the works by John LeCarre, Len Deighton and other authors with their spy stories rather than a typical Robert Goddard mystery where the pace is so fast that you barely have time to breathe. It is intricate – involving characters representing four continents and more countries. It spans from 1890s to 1910s, and is filled with secrets within secrets.

The peacetime Paris is even more dangerous than the wartime one and Max is a perfect hero, who will not leave things alone until he has dug through to find that last kernel of truth. There are not many descriptive passages in the book. It is forever moving with events and dialogues keeping up a steady pace and characters moving in and out on the stage.

As the book features peace delegations, the author gives us a glimpse in bureaucratic machinery:

It was hard not to be impressed with the way the Police and the British embassy were surpassing themselves in the cause of a speedy resolution to the awkward matter of Sir Henry Maxted’s fatal fall. And it was equally difficult to not to ponder what chances the truth had of making itself heard amist all this speed and efficiency.

And then there is the game of spies, where trusting anything or anyone may just be the last thing you ever do:

Sadly, in this serpent-pit of the world we inhabit, the word of an English gentleman is no longer sufficient to quell all doubts.

A man who reveals a secret to someone he cannot trust is a fool.

In a world filled with conspiracies, you can forever try to sift truth from lies, and never achieve anything:

The world turns on a sixpence. Nothing can be foretold. Certainty lies only in the actual.

It is a well-established opinion that the peace treaty conditions and penalties on Germany after World War I were the igniting sparks for World War II and the author gives very good picture here of how multiple bureaucratic delegations were involved in the drawn out process of peace treaty with varied interests, contingency plans and selfish goals that led to each driving their own agenda through these discussions:

Peace is almost as dirty a business as war.

To be an effective, successful spy, you must be a loner. Although not conventional it is an interesting point of view that your friends may be your biggest weaknesses under certain circumstances:

A happy man is a man without friends. For what do you do when a friend asks you for help? Turn him away? A man of principles is always compromised by his friendships.

The book delivers to the promise of its title with the characters referring to thermselves as “being men of this world” when they are forced to acknowledge unsavoury truths and form alliances with people they don’t quite like. A war does put a fair bit of disposable spin on human lives and rights and there are behaviors here which the modern mind would not like to accept or condone.

The end is of course a turning point rather than the end, as there are two more books to follow in this sage. We are quite looking forward to reading ‘Corners of the Globe’ and ‘Ends of the Earth’ and share our views on these books to you in near future 🙂

A thriller you will enjoy if you have an eye for detailing and multiple characters moving on the chessboard of battles won and lost.

Catherine and the Dragon World by Dharni | Book Review

Previous: Murder at the Temple | A Thriller By Madhumita Bhattacharyya | Book Review
Next: GiveAway 11 : March 2020