Salil Desai is a master when it comes to writing police procedural setup in Indian environment. We have already reviewed his two books in this genre.

Today we are going to talk about the third book in the Inspector Saralkar series which was published first. Earlier it was printed as The Body In The Back Seat which later re-published as Killing Ashish Karve.

The cover of the book is comparatively good. The blood on the mirror doesn’t actually reflect the crime scene but it certainly explores the spirit of the incident. 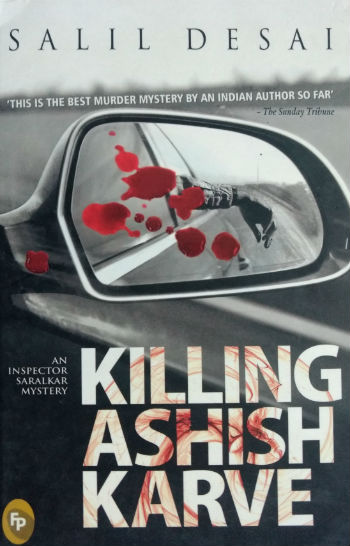 Ashish Karve is one young entrepreneur who runs his business nicely and have a promising future. From the book title itself you surely had already found that he is the victim.

His murder unfolds interestingly. A car thief named Javed have kept a specific car parked and in late night he breaks into it and runs it away. And interestingly he found all the legal documents of the car in the glove box. He thanked the car owner by thinking: Law-abiding citizens was so rare and sweet, making life really easy for your hardworking car thief. However note the word in bold, it seems quite out of place here.

After finding that there is a body in the back seat (which is in-fact a dead body) he got shocked. He stops the car sharply making the body to fall in small gap between back and front seats. He leaves the car there by wiping his hand-prints from all possible location he think of, and runs away.

The shop owners of the area curios upon noticing the car parked at a place since a few days and they have also sensed some foul fragrance coming from near by. When searched they found that there is a person in the car! And as the book says:

Ashish Karve certainly didn’t present a pretty sight after nearly three days at the bottom of the back seat.

On the other side Ramakant Karve found that his son have not approached home on time. Ramakant is almost a disable person and now is in complete care of the maid named Indubai. Sanjot Karve, wife of (now late) Ashish and daughter-in-law of Ramakant went to her father Col. Apte‘s home with her son Akshay. She was informed and she approached police that her husband is missing.

Over the course we meet Rohit Kurien and Suchitra who are working in Ashish’ company which he runs in partnership. We are also introduced to Dr. Rajguru and Dr. Bhojwani among many other characters.

And yes, of course, there are Senior Inspector Saralkar and PSI Motkar along with other fellows from police department to solve the murder.

How it unfolds is better to explore by reading the book.

The book is written as a police procedural and it sticks to it’s genre. The way Salil introduces us with the character(s) is really nice. Also the human attributes of the police officers are shown quite effectively. For example:

Even a policeman had the right to enjoy a Sunday lunch and siesta, didn’t he?

Saralkar attends a life lessons program named Secrets Of Living to get free from (at least some of the) stress which his job loads on you. By the way you can relate the name of the program with an actual program running with a similar name :).

PSI Motkar’s son needs more of his attention as he is weak in studies, especially, Maths. The sarcasm Motkar receive from Saralkar on this matter is found quite funny as well realistic when you try to see it from their point of views.

Sarlkar is found very straight forward when it comes to his duty, and he don’t mind anything coming his way. And he know that his job forces him to act in some ways which may not be found very welcome by the other. In his opinion:

Investigation of crime was always, by definition, an intrusive exercise, and human feelings were eggshells that had to be trod upon.

He know that getting the desired information from the “persons of interest” is not quite an easy task and there is no proven single way which is applicable to each one.

Politeness, he knew, did not always mollify, nor did rudeness always put people in their places.

No one is going to jump to any conclusion, but it’s important to analyse facts and dissect a personality, if we are to reach the truth.

And after doing all hard work also, when don’t get proper answers then we can see him saying:

Much of police work is tasteless, madam, and thankless too, but you have not answered my question.

Here is one good example of Saralkar’s sarcasm:

…like some journalist who senses a big story and sees it as an opportunity to further her agenda by twisting it.

And his following line reminds us of Hercule Poirot, the famous (fictional) Belgian detective by ace author Agatha Christie.

Brainstorming is a powerful emetic for our grey cells.

The book contains some philosophical lines also. For example:

Yes, I don’t know what required more courage – to live with the pain or to kill himself.

Also Saralkar’s admiration for Ramakant and Sanjot for denying firmly some rituals to be performed by Akshay shows quite rarely explore attribute of police officers.

The pace of the book is good. It doesn’t waste much time and the things move fast in terms of events and reactions. We see that in most of the cases the major characters are written nicely but not much importance is given to the other characters – in many commercially successful books also. Salil here tries giving justice to each character. The way Indubai responds to Ramakant when no one else is present, or how Motkar deals with his child, how Suchitra behaves, Sanjot’s various reactions,… everything got deserved importance.

You may find that what happens to Vijay afterwards could have been written with a little more detail. Telling about a couple of more points where we found better work could have been done, will spill some spoilers, so let us avoid it.

We also suggest a glossary of terms at the end of the book.

We can say for sure, that there are more highs then the lows in the book. So if you love reading thrillers and police procedurals are your cup of tea, you will definitely enjoy the book and will look forward to explore more works by the author.

Previous: Interview Of Prashant Yadav | Author of The Jeera Packer
Next: Reviews For Episode 19 Of Upanishad Ganga | Hindi TV Serial On DVD