Recently we got a chance to read 3 And A Half Murders, a police procedural setup in Indian environment by author Salil Desai.

While there are some really fantastic detective fictions and adventure books already published in India, it is rare to see a police procedural set in Indian environment. So have decided to give it a read. And, we found the book definitely worth reading.

Of course, it will give you some deja vu feelings if you read crime thrillers and detective fiction. There are several points where you think you know what is going to happen now, but remember, you might not always be true while reading this book! 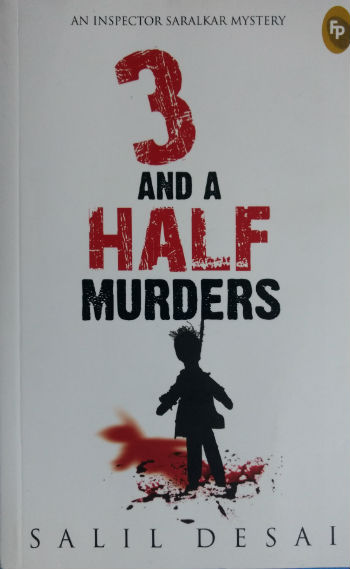 3 And A Half Murders (An Inspector Saralkar Mystery) – Book Cover

It is said that the man can be analyzed from the outfit he slips in. Same way a book’s cover is going to make a long staying impression in a reader’s mind. A high number of books are sold by impressive cover page only. In that terms, the cover page of the book is average. Definitely not bad, but not very eye caching too. It is however make you to take a look at the book content for sure.

The plot and the characters:

This book is 3rd in Inspector Saralkar Crime Fiction series, so definitely he is the protagonist 🙂

Senior Inspector Saralkar is a no-nonsense police officer. His duty is his first love. He is a kind of workaholic person who care less about everything else, including his own health! He is married to Jyoti who is like every other normal housewife. She is working as a teacher. She don’t like a lot of habits of Saralkar and is always bugging him (mostly to take care of him). While they are not very friendly with each other, there is a kind of bond shown nicely between both. Saralkar is recently diagnosed with high blood pressure and he need to undergo some more tests and need to take good care of his health. But, then a couple’s suicide in their flat which looks like a homicide (and may be a set of murders) caught him. Now he need to solve the puzzle.

PSI Motkar is an aide to Sr. Inspector Saralkar. While Motkar may not be as intelligent as his boos, he is an honest and hard working cop. And yes, he is on the way of becoming Saralkar, especially in his absence. Despite of his limitations he is one of the kind of officer, anyone want him to have in his/her team. Recently an acting bug byte him and he is playing a role of the protagonist’s friend in a play which is aimed to be played in a police-function. And Saralkar’s sarcasm got another point to taunt Motkar about 🙂

Anushka Doshi and her husband Sanjay Doshi are found dead in their home. Police also found a suicide note where Sanjay claimed that he have killed his wife as he found her cheating on him with her lover Shaunak Sodhi. And he is about to commit suicide. While the suicide note itself is capable to explain the entire incident, there are something Saralkar found unanswered and feel the need to explore everything.

In the course to unearth the truth of this double murder (or a murder and a suicide) Sarlkar meet many people like Surekhabai who worked as a maid at late couple’s place. Surekhabai got a son named Hrithik who is now started doing some wrong things. Mrs. Seema Tambe lives next door to Late Doshis and got fearful due to two deaths in her neighborhood. She suspected her life is also in danger!

There is a spiritual baba named Rangdev Baba who runs a small Ashram and a trust. While he is having a less number of disciples, one of the police officer also go to his place and he got solace there! Akhanadanath is one of the key persons in Ashram management. While checking for the clues in the case Saralkar also meets inspector Hegde, ASI Murgud, Dr. Dhingra, Meenakshi Rao and others.

So, what is the truth here? Is it a murder and a suicide, or double murder?

You need to explore it in the book by reading it…

However we are trying to not to include any, there is a possibility of having some spoilers here.

The book is written nicely where characters are build gradually and their persona will leave it’s impact on you throughout reading and even afterwards. If you love to watch movies starring Arnold Schwarzenegger or James Bond film series, you know how sarcasm and punchlines make the tricky situations also light weight. There are similar scenes and dialogs in the book. For example in very early phase of the book, you will see these lines:

Outside, in the drawing room, the man’s body swung lifelessly from a noose of nylon rope, fastened to a ceiling hook. He obviously wasn’t watching the programme playing on the sports channel, but the television is on.

Even this is also interesting:

If no one bothered to check, the dead couple could well have remained entombed in the flat, like pharaohs in their pyramids.

Rangdev Baba’s speech will remind you seeing similar speeches on Indian Television (or some might have witnessed them through newspapers):

Happiness is a journey. Begin that journey today. No advance reservation is required for this journey. Just board the train. Don’t put it off, don’t delay, don’t cancel your ticket!

Clearly he is master in his art.

Contrariness in the content is added through technical references:

It was a chapter she would’ve liked to erase permanently from her memory, but the human brain is no computer in this regard and there was no recycle bin that could be completely emptied.

In a scene where Saralkar convinces a father to ask her daughter to let Saralkar in, into their house (in absence of the father) to question her mother, shows real life emotions. Be it Lord Ganapati or any common man, parent’s words are like the line crossed on the stone for the children, and there are no bigger heroes to them then their parents. The line mentioned below have balanced emotions and reality nicely.

Saralkar was sure that he had just managed to lower her father’s esteem in her eyes.

The following line will remind you similar dialog from Hindi film Singham, about honest cops.

…only dishonest cops keep lockers. The honest ones are only familiar with lock-ups.

Some witty lines are given to Saralkar’s wife Jyoti too.

The line is satirically realistic.

Author’s love for reading is elaborated in line such:

… leaned forward slowly on his desk like a sailor quietly elated at the possibility of spotting land soon.

Writing such lines is not possible if you yourself are not an avid reader.

Positive improvements in one’s character when given a bigger responsibility is explored nicely through lines like:

He ripped the desk with uncharacteristic spontaneity and wondered if he was turning into a mirror image of his boss in the latter’s absence!

Most of the police officers or government servants definitely feel the below mentioned stuff in their mind when caught in tricky situations. Especially you see the justice should be delivered without any special treatment to anyone (everyone should be equal to the law).

What kind of democracy was this that touching leaders, politicians, babas, and rabble-routers was fraught with apprehension of violence and law and order problems created by their irrational supporters?

We have noticed it on many incidents, even in recent past that people who are having even a little influence on a group, knows how to use it in their favor. Be it a politician or a so called god-man. They know how to deceive his/her disciples or followers when caught in tough situation.

The feelings of a person broken from inside, may due to harsh words or situations are accurately explored in lines like:

He stood there, a picture of hurt dignity, leaning on some invisible cane of self respect.

And lines like the following proves author’s command on the language and literary aspects to make it philosophical and yet explain the situation.

The only music it made was off-key – no harmony, no melody, just an unbearably hair-raising, screeching sound, like the scratching of nails on a slate.

The example given about will definitely give you an idea about what to expect in the book.

Each and every human being have his/her limitations and the book is good at exploring them also. Nobody we see in real life is perfect, and thus the characters of the book. Motkar possessed dignity and honesty yet a culprit slips from his hands. Saralkar was also outsmarted at places and have his own shortcomings. Dr. Dhingra is world class surgeon but he have extra-marital affair. This is what makes the character real.

Also some of the phrases (like GP for a General Practitioner, word often used for family physician) are not known to every reader. A glossary at the end could have made the book better.

We have seen that even (some of the) famous author go for some adult content in the book which is avoided here nicely by Salil and it is a positive attribute of the book.

Overall a nice thriller to explore.

It is one of the nicely written murder mystery. If you love to read crime thrillers and if you like exploring police procedural, you will love reading this book for sure.

We like reading the book and have already started reading other books in Inspector Saralkar series, and we will come with the reviews for those books in the near future for sure.

Previous: Lessons to Learn from MasterCard CEO Ajay Banga’s Talk About Taking Risks in Your Life and Career At Stanford
Next: Person Of Interest | Introduction to SciFi TV Series