Please read the title in the proper context as it is a “book name” followed by “by author name” (as you wisely know). Don’t worry, just kidding …:)

Actually this is an irony of crime fiction writers (and even movie directors in many cases). In most of the cases their book title reflects some crime (that’s why it is crime fiction right?), so it is obvious.

Anyway let us come to the point.

Intrigued by reading 3 and a half murders – a police procedural setup in Indian environment – we have decided to read other two books in Inspector Saralkar Series penned by Salil Desai. And here are our unbiased views and reviews for the second book in the series – The Murder of Sonia Raikkonen. 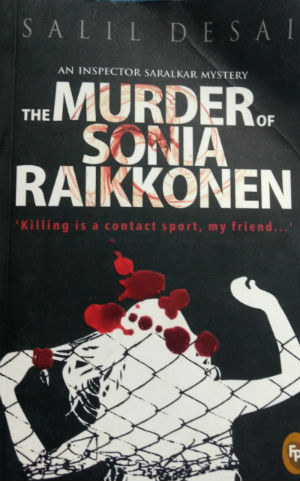 Senior Inspector Saralkar is a cop with “I need to do my duty honestly and solve the cases on hand, no matter what” attitude. His wife Jyoti is a caring and loving like any other typical Indian housewife. However there are always some points where husband-wife have different opinions and often it results into some dire situation (at least for some time), it is destiny of almost every marriage. Such things are mostly not ultimately dangerous and everything fall in place over time, at least in Indian marriages. As the couple don’t have a child, Jyoti was keen adopt one, and Saralkar was unable to make up his mind to do so at least for now.

PSI Motkar is assistant of Saralkar. He is just “go man” for Saralkar. They have good rapport. Though Saralkar almost always found taking a dig at various stuff Motkar does, he trusts him. Motkar have a son who is quite week in studies, especially Maths. And Motkar needs to pay attention to him.

There are other cops come to the picture including Salunkhe, Police Commissioner, cops from Maharashtra and UP.

A girl’s body was found in quite early morning in a garden in Pune and she was found murdered brutally.
The scene confirms that she should have been physically assaulted and murdered afterwords. Recognised as Sonia Raikkonen, her body was found in indecent condition. When started chasing for the clues, initially Saralkar and team was clueless but eventually we got to know that she was staying at a near by hotel.

Chandwani, the hotel owner and his aide Ashok reveals that Sonia is from Finland and it is not her first visit to India! She was checked in with his boyfriend Vaino Gardstrom as per the booking schedule. The more Saralkar, Motkar and Salunkhe tried getting information, more and more characters are introduced including a taxi driver named Badri Tiwari who was the last man Sonia was known to meet; and his friend and a garage owner named Pappu Yadav.

Because of Sonia’s foreign citizenship, the case become international. And now it has to be solved. Involvement of a hot-head politician was also found probable in the case and things get even more complicated with each new clue. If it was less, Saralkar was approached by one of his old colleague to get some assistance in another murder case happened outside of the city!

How and why Sonia was murdered is better to explore in the book.

Salil Desai as an author is in full control of the plot. The way the character grows will make you acquainted with them and in turn the book. Most importantly the human attributes of the characters will make you to feel them real. They are not perfect ones like we see in films. They have their strengths and weaknesses. For example, Saralkar is quite afraid of stray dogs. Leaving for somewhere in very late night grows the possibility of stray dogs chasing him (as he is on his bike) makes him nervous. He don’t like to argue too much with his wife Jyoti (which husband likes it :)?) and try to found way to escape it.

This scene from the book where Sarlkar and his wife was in conversation will look familiar to almost every married reader.

Even as he began speaking, he knew he was committing the biggest mistake husbands often made. “What are you thinking?”

And same for his feelings:

Did spouses in general, and his wife in particular, have hidden cameras that watched husbands?

Policing is a tough work. You are being in touch with the bad people than the good ones. You are spending more time with those fellows you don’t like, even more than your family. So life can be miserable if one doesn’t have a sense of humour (unless he doesn’t have a sense at all). Saralkar often say many things in sarcasm, which you found witty too.

You don’t have to utter those magic words for reporters to hear them. They are masters of creative authenticity.
OR
So if a tailor wore ill-fitting clothes, was it a reflection of the man’s tailoring skill or lack of it?

During their tough duty works, thoughtful policeman (and even common man) often feel the following when heard about domestic violence and bizarre facts about some crime:

How did people who had been soulmates, suddenly feels nothing but contempt and bitterness for each other?

The book also references the changing psyche of young adult generation. Due to the exposure with the stuff more than they can handle due to various aspects, they often live in a different world and think at different frequency. It makes any of us to think like Saralkar:

What was it with these teenagers and twenty-somethings that they seemed to be so easily pre-disposed to the violence and crime, even at the most petty provocation or for minor reasons?

Saralkar believed in getting the work done. The result is more important to him as he sees the things in bigger picture than his subordinates. So when he says the following, it seems odd but not offensive.

You are not in position to earn their goodwill, Salunkhe, so purchase it.

We humans have emotions and that’s why it is possible to get work done in emotional way. The following line (thought by Vaino) fits very much in real life, and I am sure that we all have experienced it at various stage in our lives.

Computers couldn’t be pleaded with or tapped for sympathy.

At the same time the following line adds to the character of Saralkar when he says a powerful lawyer this:

You may be a crusader against corruption, but please retain some sense of proportion before making wild allegations.

The author have brilliantly weaved the stuff about Anna Hazare led movement for “corruption-free India” and the incidents happened in it’s context.

The book also have a dig at a harsh reality face by man through this line:

Women could flee to their mothers and sisters. Man had nowhere to run!

And during the last conversation which is quite hypothetical, the lines like the following also found (it talks about psyche of criminals):

We don’t know how these minds work and why they work that way. What makes their brain malfunction and produce a perverse logic.

These line proves that the author have studied the psyche at great extent. The last chapter is must read for the quality writing it have.

And the most philosophical line of the book could be this one:

One more thing I like about the book is the way the unselfish love and care grandparents have for their grandchild and the pain at the same time by seeing him slipping from their hands is portrayed in the book.

There are some characters we are intentionally skipping to talk about, and so do about some lines from the book to avoid the spoilers. Because, for a murder mystery, spilling the beans before reader read it, is not less than a crime 🙂 right?

We must say that the cover page of the book fits in with the story.

Also be warned that there is a little adult material in the book. Though to the writer’s credit neither he is intended to lure the readers nor titillation is aimed. Also there is a chance that you might not be “all convincing” with reason for the murder(s) and killer’s plan. But the killer’s psyche status could justify it.

You will enjoy this police procedural for sure if crime thrillers are your cup of tea.

We enjoyed reading this book and are keen to read the other book in Inspector Saralkar series named “Killing Ashish Karve” and we will surely post our unbiased and genuine Views and Reviews for the same as well.