I consider myself lucky for being a professional book reviewer and being associated with Team ThinkerViews. As I have often mentioned, the perks of being a genuine book reviewer include exposure to new talents. Some of them confirm with their work (mostly in the debut itself) that they are here to stay.

I will also give credit to some of the small publishing houses which invite debutante authors and often encourage them by publishing their books. However, as far as my opinion is concerned, I think the self-publishing (both in the traditional way and even more importantly publishing EBook – mostly Kindle version) is the real game-changer.

Recently I came across a book named The Girl With Golden Thoughts, penned by Dr. Ashutosh Jogia who works in Shantaba Hospital, Amreli, Gujarat – at present. Young and enthusiastic Ashutosh is a straight forward person who belongs to a typically humble and educated Gujarati family.

He is impressed by various authors, but, what he values the most is, simple writing. Rather than promoting himself as an intellectual with a fantastic vocabulary, he loves using day-to-day language.

When his parents insisted him to write something in the regional language Ashutosh decided to write a book in Hindi. Yes, he has already written books in English. He may have his next venture in Gujarati – his mother tongue, or maybe not. It is too early to say. While many doctors (like Kamal Mahawar – author of – Fight With Fat) love to write about health related stuff; some others (like Naveen Kakkar – author of – Dissected) find it amusing to explore other areas.

The Girl With Golden Thoughts (द गर्ल विथ गोल्डन थॉट्स) will remind you of a book by Chetan Bhagat or Surendra Mohan Pathak. It is for the readers to enjoy reading it and at the same time, you see the reflections of current happenings in it. Let me put a disclaimer that we have received the book from the author. The review is unbiased and uninfluenced by all means, as always.

Let us take a look at the cover page of द गर्ल विथ गोल्डन थॉट्स.

I often hear or read people reiterating the fact that “a book should not be judged by its cover”. I totally agree with the same. But, at the same time, I also recognize the impact a cover page can make in a reader’s mind (it could be either positive or negative). We all are familiar with the impact of first impressions. And, the cover page is responsible for the first impression of the book it belongs. 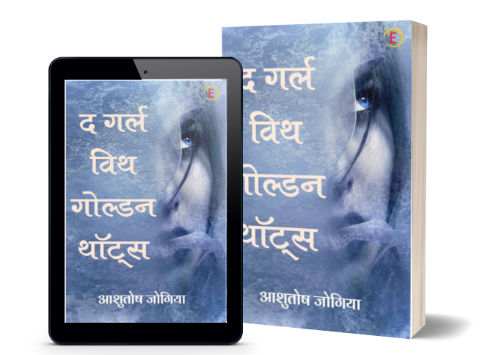 A cover page usually weaves the book title and one or more of the key incidents explored in the book. The cover page of this book, thus, is expected to have a girl, possibly lost in thoughts. As you can see, the cover page uses white and blue colors with the shades of golden. A girl thinking something is seen where a large part of her face seems to appear from behind a glass pane or mist. The girl has blue eyes. It reflects the mysterious identity of an intelligent girl.

Of course, the cover page could have been much better. It is simple yet effective.

Vyom (व्योम खुराना), Bhaskar (भास्कर मेहरा), and Alisha (आलिशा खंडेरवाल) are fast friends. They study in IIT Delhi together. Their parents knew each other quite well. The book starts when they have just completed their last exam. They are the only ones who are not selected in the campus interview as they haven’t appeared for any. The boys have their parent’s business to join and carry forward the same and the girl Alisha will marry Vyom!

So, their career-path or let us say the path of life is almost all set.

But, life is quite unpredictable.

Before they can plan a vacation trip to a hill station. Vyom was summoned by his father at Alisha’s home. He was surprised to see his and Alisha’s father were present there. Of course, Vyom and Alisha’s marriage was on the card; but they were not called for that.

Actually Alisha’s father Anantray was associated with a political party. The election is announced and the candidate of the area met with his death due to a sudden heart-attack. Being a friend, Anantray asked Raghunandanrai – Vyom’s father – to help him, who happily oblige to his friend and future relative.

What was the plan? Where did Nirjara (निर्जरा) come to picture? How things will move forward?

Well, all these things are better to explore by reading the book. On the course of the story, you will meet Bhaskar’s parents, Arjun, Resham, Rajuchacha and some other characters. But, the story remains focused on the 4 prime characters mentioned above.

The foreword of the book is always an important part, but, we often neglect it. Actually, you should read this block, to know the author better and to get his/her vision about the book. The foreword segment of “द गर्ल विथ गोल्डन थॉट्स” tells a lot about the author and his vision. He, obviously, encourages readers to read and connect with the stories. He actually moves one step forward and asks the reader that if they think they can also write stories like this, they should go ahead and start writing. He also advises having a stable source of income before jumping into this (or any other) creative field. His inspirational yet realistic words are definitely worth reading.

What I like in the book the most is the use of day-to-day language. It lets the reader easily connect with the story.

The author seems to have heard so many storied from parents/grandparents in his childhood. It is reflected in the choice of names for the characters and places (eg. Rajnagar).

Strong characters is another positive attribute of the book. All the prime characters have received the footage they deserve, regardless of their gender, financial or political status. I will suggest you read this book to see the gender-neutrality. Some psudo-feminists have wrong ideas about gender equality and feminism. They think that wearing short clothes, having a habit of smoking/drinking/drugs or similar, uttering abusive words in conversation are the parameters of gender equality or feminism. That is wrong, of course. This book has no adulteries, no cuss-words, no violence and yet it is a good psychological and political thriller having strong male and female characters. And, I like it that way.

I like the exploration of characters as well as the explanation of family backgrounds of primary characters including that of Nirjara. This explanation helps us in understanding various attributes of the character and his/her actions.

The author is good at understanding the psychology of real people and then implement them in the characters of the story. Some lines in the book look quite simple, but, they hold an essence of wisdom and practical lessons. For example:

I also like the way the similarities (and differences too) between Ramayan and Illiad (the famous poetry by Homer in Greek) are elaborated in the book, through a conversation. It is quite a thoughtful conversation. Only an avid reader can weave such stuff nicely in a story as a writer.

The book has some lines which spread humor without getting cheap. Actually, bringing a smile on a reader’s face is challenging, but, not using anything below a certain standard for the same, is even more challenging. The author does it effectively in this book.

Here is another example of spontaneous witty dialog:

Some characters play deceiving games in the book. And the author has given them some brilliant lines.

There are various relation-defining lines in the book. Those lines explore the strength of the relationship very effectively.

We always want the person we are in a relationship must trust us at this level. In other words, we love to hear such lines about us from our friends and loved ones.

I like the wordplay and analogy here, but the uninvited line-break is something which should be avoided. I have found a few such formatting issues in the Kindle version.

I have also found that some words are misspelled. Here are some examples:

There are various aspects and incidents explored in the book which need to be talked about, but I need to skip them in order to avoid spoilers. I am sure that the above-mentioned quotes from the book must have given you a fair amount of idea about what to expect in the book in terms of writing quality.

Before concluding, however, I cannot stop an urge to mention the realistic exploration of political scenarios, especially, the election campaigns and how the media covers it. It is taken directly from real life. The way the parties implant their mouthpieces in press, the way media covers various incidents, the way sensations are created and incidents from the past are used in favor of (and even against) a specific candidate… You will enjoy reading all of them 🙂

If I need to choose just a single small block of lines from the book which reflect the story and convey a wise yet strong message; I will settle for the following:

A girl can be your best friend, greatest enemy or worst nightmare. It just depends on how you treat her.

I find it quite pricey (especially for our market where we compare the amount with the number of pages in the book). When I am writing this, the book is available for Free (Amazon Kindle EBook), and you should go for it.

Read the book like watching a masala film and you will enjoy reading it. And yes, there is a mystery part to it as well :).

I like reading this book. If you are looking for a fresh contemporary light reading then this book is a good option. You can purchase it during a promotion and you will find it worth the money spent.

An Interesting Interview with Ashutosh Jogia | An Author By Passion

Previous: Padmavat An Epic Love Story By Purushottam Agrawal | Book Review
Next: The Guardians of the Halahala by Shatrujeet Nath | Book Review