Posted by: Editor January 20, 2020 in English Leave a comment

Growing up in India means reading and listening to endless stories of adventures featuring Devas, Danavas, Asuras, Rakshasas and of course humans. The treasure chest of Indian mythological tales described in the Puranas and history of the Indian subcontinent captured in epics and numerous works of literature is filled with many larger than life stories. It is an endless well of inspiration, learning, and entertainment.

It is no wonder than that these stories are re-told by every generation in one way or another. Here on Thinkerviews platform you’ll see that we enjoy the historical and mythological fiction as much as contemporary works and are always exploring new authors working in this genre. Recently, we came across the Vikramaditya Veergatha trilogy by successful author Shatrujeet Nath. We loved these books, and on behalf of Team Thinkerviews, here are my thoughts on this for all of you…

Published by JAICO, the trilogy consists of:

Let’s take a look at the book cover of The Guardians of the Halahala – the entrance to this majestic world: 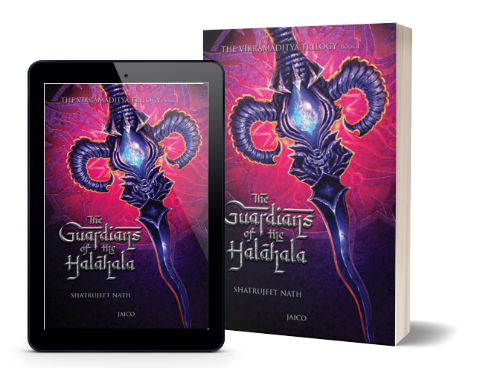 The book cover features a dangerously fashioned dark dagger with an obsidian dagger and wickedly curved blade – housing the Halahala at its heart in the form of the blue light. The dagger can be seen to bring the dark shadow on the blazing sun emblem in the background. It is a beautifully designed cover – although a bit dark – conveying the central thread of the story very effectively. The graphics are sharp and the book cover is a good mix of modern graphics and ancient images.

The cover page might inspire the question in the browser’s mind – what is Halahala? In the authors’ own words:

Halahala was the all-destroying poison that the devas and asuras accidentally churned out of the White Lake while looking for the Elixir.

The prologue takes us to that starting point of so many stories – the Amritmanthan. As the devas and danavas churn the primordial seas in their quest for the immortality, a massive obsidian rock containing the poison – the Halahala- comes up. A small exposure is enough to overcome the greed of both parties and soon they travel to Lord Shiva – the only God who can deal with the Halahala. As Shiva drinks the Halahala to protect the universe from it, he is the only one to recognize that this is not the end of it. The curse of Halahala has just begun.

Cut to the time of the reign of Vikramaditya – that king of Avanti who is immortalised through his good deeds and whose name needs no introduction in India. At the time of this story, he is ruling from his lovely city of Ujjayini on the banks of Kshipra and is just completing a Rajasuya Yajna – becoming Samrat Vikramaditya. He has the allegiance from all major states of Sindhuvarta and the Sun of the Aditya dynasty is shining strong from Anarta in West to Magadha in East and Matsya in North to Dandaka in South.

But hardly a day has passed as the Samrat for Vikramaditya when the news of Huna and Saka attack on Western border arrive. The kingdoms of Sindhuvarta have only had a few years of peace since their battles with invading Hunas and Sakas that cost too many lives across Sindhuvarta. On that very night, a mystical Sadhu comes to Vikramaditya and pledges a dagger in his protection. The sadhu is none other than God Shiva and he has brought the dagger containing the Halahala. He warns Vikramaditya that both Devas and Asuras are after the powers of the dagger and will try to take it away from Vikramaditya – by hook or by crook. Vikramaditya accepts the responsibility.

On the strength side, Vikramaditya has his Council of Nine:
His half brother Vararuchi, his raj-guru Vetal Bhatta, his closest friend Kalidasa, his loyal schoolmate Amar Sinha, his nephew Ghatkarpara, engineer Varahmihira, nishada princess Kshapanaka, wondering tribe’s daughter Shankubala and the royal physician Dhanvantri. All these people are not only fearsome warriors, but also wielders of a supernatural power of the Nine Pearls, albeit without a conscious knowledge of it.

And so the mighty Samrat now has a lot to deal with: Hunas and Sakas from West, Devas from North, Asuras from South and with trouble brewing in East with Magadha attacking its neighbours. The battles come soon enough as pisachas led by Andhaka and the brotherhood of Ashwinas attack Ujjayini. Both are defeated. So the asuras send Shukracharya and Indra sends the Maruts.

How long can Ujjayini hold against such repeated attacks that involve not only force but cunning as well?

And if Vikramaditya is engaged in protecting Ujjayini, who will protect the Sindhuvarta?

Although I have outlined the storyline very briefly above, being mindful of the spoilers, it should give you some idea of the scale of this book. The Sindhuvarta features some of the most well-known Indian kingdoms and dynasties in its glory, as you can see in the map below: 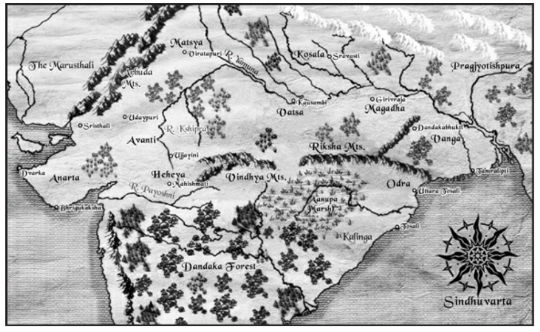 In addition to this, Shtrujeet Nath recreates Indra and his devaloka and Hiranyaksha and his paatal. The devaloka has Guru Brihaspati, Ashivinikumaras, Apsaras, Garudas, Marutas and Paatal has Shukracharya, Holika, Andhaka and much more. These are the characters familiar and yet new. We have known them through multitude of stories, but here the author gives us a few surprises and intriguing possibilities.

And then there are humans. Not only the majestic Vikramaditya, but the names of his Council of Nine should ring bells for you. The author has chosen to bring them all here in one place and tied to each other through threads of friendship to forge this powerful group of men and women who can literally fight any foe and stand on their own. Not only have they courage, training in weapons and loyalty for Avanti, they also are well-versed in art and literature, in mystic and tantra and in engineering and invention.

That’s why the premise works – pitting these larger than life humans against not only invaders and traitors, but against supernatural Devas and Danavas – demigods and demons, while the humans stand by their promise to the ancient God of Gods. And the possibilities here are endless. You can let your imagination go :).

When you create such a lot of powerful characters, each has a story of their own, each can overpower the others at times or be neglected, but the author does a great job of weaving multiple narratives such that you never feel any one character overwhelming others. With so many threads involving so many fronts – the story is moving quickly on multiple fronts and it will be very difficult to put this book down once you have started it.

There are, of course, times when you question something or the other as the story moves forward and in most of this cases, the author has tried to capture a logical answer,e.g. when Lord Shiva warns Vikramditya to beware of both Devas and Asuras, Vikramaditya asks him why does he not give the dagger to the Devas who are generally recognised as the force for good. The answer below very succinctly captures the transitory nature of such entities:

The universe is all about balance. The forces of light and darkness are meant to keep a check on one another. For the tyranny of virtue is as unbearable as the stranglehold of vice.

While the scale is grand, there is lot of detailing in the scenes as we witness conspiracies, coups, spying and trickery, cockfighting and drunken brawls, torture and decapitations, dutiful children and greedy, murderous ones, valiant fighters and cowards holding grudges, every thread in the story adds a link in the chain of events. Although not verbose, the author sets stage with a few sentences as he creates one place after another, like the sample below:

It was an ugly, unpleasant town, a shabby clutter of buildings, hovels and shanties that staggered down from the hills amid the slag heaps and foundries and spilled like effluvium onto the plains below. Long before the first iron mine, the lace had been a peaceful, nondescript village, but now there was evidence of nothing but economic greed raking the earth that had yielded life-sustaining crops and fruit trees. It was clear that the inhabitants of this town were more interested in what was below the ground than above it.

Or when he describes that strange experience of déjà vu we all have some time:

The way humans sometimes remember having seen or experienced a situation before, even though what you’ve remembered has just occurred in front of your eyes…like a fragment of a forgotten dream unfolding and coming to life.

Although we would not like to give away too much of the story, we would like to share some metaphors and one-liners here to show how well the book captures the intricacies of human nature:

The more truthful you are, the less people are inclined to believe you.

Craving attention is a childish instinct, and not a sign of maturity.

The snowflake that melts on a mountaintop intuitively knows the way back to the distant sea.

Every human being has weakness that can be exploited, a soft spot that makes him or her utterly vulnerable.

The author has a gift with the verse and he achieves a good blend of modern and ancient terms to give the book enough historical references but not to overweight it by explaining too many Hindi and Sanskrit terms. There is a nice summary of characters and terms both at the beginning and end of the book to keep you up-to-date with references should you feel confused with multiple storylines. As the author says in the introduction:

The very notion of established myth and legend is flawed, for mythology is a wellspring of possibilities, where many versions of the same myth coexist in harmony.

The author has done a brilliant job of creating an intriguing stage and bring together a prodigious set of characters to bring to life a legion of standalone myths to build a new world of stories – a new set of myths. And it is thoroughly enjoyable.

We read the kindle edition of the book as the paperback is a bit pricey, the Kindle option may work better for you too…estimated reading time 5.5 – 6 hours once you get stuck into this mythical world.