Home / Books / Where Will Man Take Us? By Atul Jalan | Book Review

Where Will Man Take Us? By Atul Jalan | Book Review

But, these books are not for everyone. An average reader, who loves exploring fiction, thrillers, romantic stuff; basically read for entertainment, may not find them appealing.

Being a professional book reviewer associated with reputed Team ThinkerViews I am fortunate to get exposed to books of various genres. And academic books are one of them.

Today we are going to talk about a book named Where Will Man Take Us? (Tagline: The bold story of the man technology is creating) by Atul Jalan. Reading this book reminded me of the following:

Of course in a little different context.

Let us take a look at the cover page of this book:

Being the doorway to the virtual world explored within, the book cover plays quite an important role in book sales. It is quite obvious. We love attractive things by nature. So, it is not unexpected if the book cover attracts us to itself. 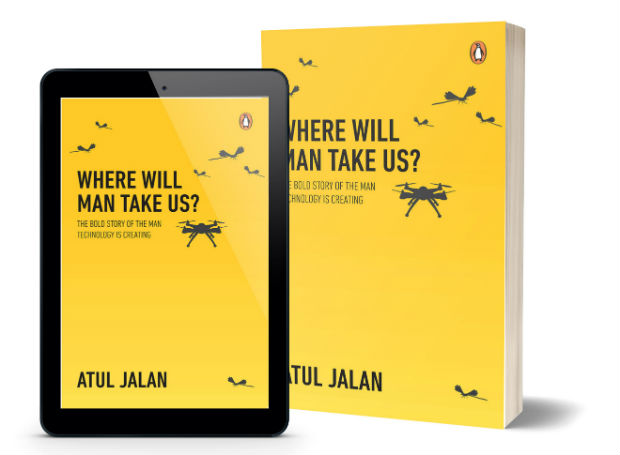 Where Will Man Take Us? : The bold story of the man technology is creating by Atul Jalan | Cover Page

As the title and tagline suggest, the book talks briefly about the past and then talks about the current technologies and possible future. Thus seeing a few robotics elements on the cover page is expected. The designer tried choosing a soothing yet attractive color as the background. Black text looks moderately good on dark yellow background.

The designer’s minimalistic approach works well for the cover page.

The Book And What We Think Of It?

Usually, we talk about the and our views in two distinguished sections for a book. As this book is quite different in nautre, we are merging both these segments here.

The earth has been separated from the Sun a long ago and what we see today has a history of millions of years. While we acknowledge the inventions of electricity, computers, mobile phones, the internet, nanotechnology,… and even the wheel; but we often miss the moments of evolution when the possible first living creature breathed for the first time. How they are evaluated to have the ability to live on the ground and eventually become Homo Sapience.

The author starts talking about the possible first moments of evolution in an interesting manner and then reaches to modern history. He is (rightly) impressed with Alan Turing and his work. The way it affected the life we live is something very important. If you want to know more about Alan, you should read this book, and if you are still want to know more, you can watch a nice movie “The Imitation Game”!

The content of the book is articulated in 26 chapters distinguished in the following 5 segments:

Of course, Alan Turing is not the only person the author has talked in detail about. Over a period of time, many ignited mids have put their best efforts in, to make the lives better for others. The motto of the book is to talk about the technology in the most possibly predictable way. It is a well-known truth that we invent the technology to make our lives easier, and then technology is evolved into something unintended. It then becomes such an integral part of our lives that we often take it for granted. Take for example the availability of the Internet and Mobile phones. Just go a couple of decades in the past and see how precious and sacred it was considered and now, internet-connected mobile phones are considered as an extension of the human body!

What in my youth was sci-fi, is “sci” in my middle-age.

Those who studied the history of computers know that earlier computers were of size of a room and have very small computation capacities compared to their today’s counterparts. Due to the technology, it is possible that they are reduced in size and price and became much more superior in capabilities. Even a moderate smartphone these days is capable enough to initial supercomputers.

The size of devices kept shrinking and nanotechnology make them what they are today. Do you think that any further shrinking is possible? Or we reached to the size of an atom for the smallest technical part of such devices and we are almost using the best tech devices possible?

The author talks in detail about DEEP BLUE (the supercomputer that had a chess-match with Garry Kasparov) and how it’s winning over the chess maestro (in an inning) is considered as a landmark.

The author also talks about the first supercomputer in India – Hollerith Electonic Computer -2M imported from Britain in 1956. The dimensions mentioned for it seems unreal. The author mentions them in (“) as a unit. That can lead to miscalculations. The units he has mentioned are in “feet” and people usually consider (“) as an inch. Here are some reference links you can go through.

The good thing about this book is quite lengthy bibliography mentioned at the end of the book. It shows the amount of research the author has done. You can find quotes by various remarkable persons of various fields at a regular interval in the book. Some of them are Minsky and McCarthy, John Searle, William Illsey Atkinson,…

The author also refers to the ancient Indian scriptures like Upanishads. Here is one such reference:

the wise man looks into space and does not regard the large as too large nor the small as too small, for he knows there are no limits to dimensions.

The author also refers to Kasika (a commentary on Panini’s Astadhyayi) and many other such scriptures.

At the same time, the author talks about “Game Of Thrones”, Go (a game originated in China), and many other modern stuff.

The book obviously talks about cryptography, crypto-currency (in moderately good detail), blockchains, AI, robotic and other such aspects. Here are some of the interesting lines I found in the book:

A machine deserved to be called intelligent only if it could fool you believing it was human.

We always overestimate the benefits of technology in the short term and underestimate its power of transformative change in the long term.

Life is reducing to a data flow, making us info-organisms – not just bio-organisms.

The author is good with wordplays and you can find some interesting words like “fossilized”, “islandizations”, among others.

As said earlier, writing such a book requires a lot of hard work and immense research, at the same time it may not be appealing to everyone. Such a book serves better as a reference point. Of course, it can be submitted as a Ph.D. thesis by the author to any reputed university and he will be honored with the degree :).

A well researched, well-articulated technological research work where the author tries connecting dots and predict the possible future. It is not for everyone. Go for it if you love reading such academic stuff, skip it otherwise.