One of the exciting things about being a part of this blog is the opportunities to connect with writers from around the world. One of the writers we connected with a while ago is Auriel Roe. British born Auriel is a teacher of art and drama and has lived and worked in interesting parts of the world. Now, she has created the world of Blindfellows – a quintessentially British boarding school.

Published in 2017, A Blindefellows Chronicle is her debut novel which she was inspired to write after being shortlisted for a major UK short story contest.

The book has been published by Unbound. This is a website where authors share their ideas with readers. When readers like the idea, they pledge for it in advance. The founders feel that publishing this way means readers get to participate in the process of creating books they buy, and authors are free to write the books they really want. The authors also get half the profits their books generate, rather than a tiny percentage of the cover price.

It is quite an interesting way to publish through crowdfunding. You can check the current projects and ideas details here: 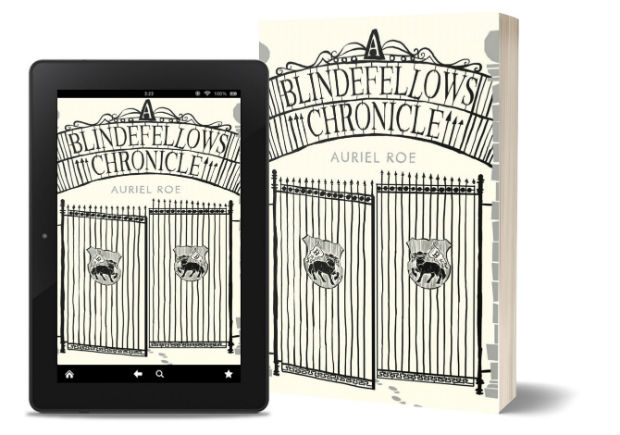 As you can see, the cover page of this represents a vintage look. An illustration of old fashioned gate having book title written on the top of it represents the background of these stories quite well. The gates feature the emblem of the school showing off the connection with sheep and the emblem that is part of the uniform of the students. The cover page uses just black and white colors.

This simple yet effective cover is not very attractive or cheerful and the book may not be able to catch your attention in a collection of books.

If you have read English literature, you would know the strong tradition of Boarding Schools they have and the strong influence the hierarchy of such schools – public and private – can exert on the career and whole life of the students who go there.

As the name suggests, this book is set in a boarding school called Blindefellows. It has an interesting evolution from being a charity school for poor blind boys to becoming a private boarding school. The book takes us through the journey of the school over four decades through the following stories:

It is Michaemas, 1974 when we get our first peek at this institution and meet new history master Charles Sedgewick as he joins the school. The deputy head, Reverend Beaulieu “Bunny” Hareton, and William Japes, the physics master, watch over him and soon Japes takes the young man under his wings. Sedgewick slowly finds his place with the boys and takes them on a visit to the battlegrounds of the world wars in France to re-enact the past in the first story.

With each story the school moves on with time as the inmates struggle to hold on to old traditions e.g., they have their first female teacher. They find a way to keep the flock of sheep by developing cheese-making facility and show off the entrepreneurial skills of some of their students. Under Bunny’s leadership, the school starts to take international students and providing them a comfortable home.

The teaching is still hit and miss, but the students put together drama performance to re-enact the history of the schools without too many mishaps. The book keeps introducing one quirky character after another and the fun rolls on.

Eventually, Sedgwick marries a local farmer’s daughter Yvonne without ever intending to. Life goes on and in the last chapter, we meet him in an old age home where he still has some people he can call friends.

Like a lot of comic novels, you’ll enjoy the book lot more if you are familiar with some of the social traditions, context and quintessential jokes that this world is set against. If you are not, you’ll still find it funny for its quirky characters. The comedy comes out of human nature and how we behave in typical set-ups and situations and this book is filled with a lot of such gems that will make you laugh.

The book is set over a span of 40 years which gives the author ample opportunity to showcase how the schools have changed over that time and so must the teachers who devote their lives to such schools. From sincere Sedgewick to mischievous Japes, the characters here are one of the biggest attractions. Whether it is the old-fashioned masters or the ever ingenious students, the school years are anything but boring. And if the humans are not enough, Blindfellows also has sheep :). The sheep here inspire both rebellion and enterprising…

The author lists P.G.Wodehouse as one of the writers she admires, and I can definitely see glimpses of the Wodehouse world here in the set-up as well as dialogues. It might take you a while to get into the book and some of the English slang may be unfamiliar, but the book gets funnier as you progress through chapters and approach the stories closer to the date. The author paints the inside picture of countries like Syria during the time of conflict and how the world has changed around some of the old soldiers who knew these countries in the 1960s.

We have tried not to give away all the stories above and we’ll try to avoid spoilers here as well, but let’s share some snippets from the book.

Love how the author sets the atmosphere:

In the Oak Room at Blindefellows, the headmasters of the past, lining the upper section of the wood-panelled walls, rested their hands upon hefty tomes, imbuing all whom they surveyed with studious intent. The varying conventions of scholarly attire through the ages were on show, starting with bearded chins encompassed by frothy ruffs and black skullcaps and gradually evolving to the clean-shaven, navy-blue three-piece peak-lapel suit of the Reverend Beaulieu Hareton of the present day. What they all had in common was the intensity with which they stared down at the teachers, as if checking they were spending their recreation wisely.

Or describes the characters as they go on the stage for their play:

Mr Sedgewick, in the role of Old Lady Squeamish, was wearing a mop cap and starched pinafore smock-dress, which Japes had told everyone made him look like the spitting image of Toad as the washer woman in The Wind in the Willows. Mr Tree, meanwhile, had fine-tuned his part such that Pinchwife bore more of a resemblance to Bill Sykes from Oliver Twist than to a comically cuckolded Restoration husband. The production proved to be a touch unconventional in other ways as well.

Or how she writes a scene of confusion and comedy, when Sedgwick thinks Yvonne’s father has died:

“I loved him so much,” she wailed, a little too loudly. “He was the light of my life. No one cared for him like I did!”
Sedgewick shifted uncomfortably in his chair. This surely was an exaggerated accolade for the Don.
“When I was lonely,” she continued. “I’d just bury my face in his mane and I’d start to feel a little better.”
“His mane?” Sedgewick didn’t like the allusion.
“And I’d feed him special little treats from my hand—”
Sedgewick felt this flow of information had to stop right there and then. “Yvonne, you really shouldn’t be in school when you lose a parent. Why don’t we call you a taxi to take you home?’
“No, no, not my parent: my donkey – my poor old donkey, Oaty.”
‘Ah, “Donkey Oaty”, not Don Quixote?’
‘Yes, my donkey, Oaty.’ She let out a new volley of sobs. ‘He committed suicide!’

The author gives us many interesting observations about how some people like teaching while others prefer hands-on approach in life. Here is a part that all lovers of history will relate to:

The past is my adventure. When I get stuck into a riveting history book, peer into a microfiche reader at centuries-old pamphlets or sit back and watch an old newsreel, I am transported to those dramas of the past.

Or how important the education outside schoolroom can be while describing the typical English countryside:

These days, he took his pupils on a twice-annual trip there to collect data on the plethora of flora and fauna concentrated into just under two hectares, followed by a picnic lunch. All around the Majestic Chestnut were its offspring, fine trees in their own right, along with a dozen or so fine, healthy beeches and a few patches of scrub oaks where wrens hopped about. The path through the wood, a parting through wolfsbane, foxglove and bluebell – a toxic triumvirate – was beautiful at this time of year, in its haze of budding blueness.

To be a good comedy writer you need to have an insight into how human mind works. Having been a teacher in international schools, you can see the writer is very accurate in her portrayal of students and the atmosphere of the school. She also weaves in various movements like “Protect the Trees”, as every generation finds a cause to protest for. And all this in a light, comic way so it doesn’t weigh the stories down.

All in all, an enjoyable comedy set in background of a British Boarding School. A recommended read for all who like comedy and satire…

Previous: Jason Bourne | Movie Review
Next: Where Will Man Take Us? By Atul Jalan | Book Review