Do you love reading crime thrillers and murder mysteries? I do.

So, when recently we were approached by Anuj Tikku, about his latest book, Unholy Tales From Banaras we were curious as well as concerned! Curious because we definitely wanted to read the book because of its genre, and concerned because we wanted to avoid it in case it is horror or adult only book.

The book, as the author has assured us, turned out to be a thriller. Being a murder mystery it is not intended for underage readers anyway. But, there are no adulteries in the book and almost no cuss words. I consider it as a positive attribute of the book.

According to me, a cover page plays a very important role in introducing the book to the potential reader. 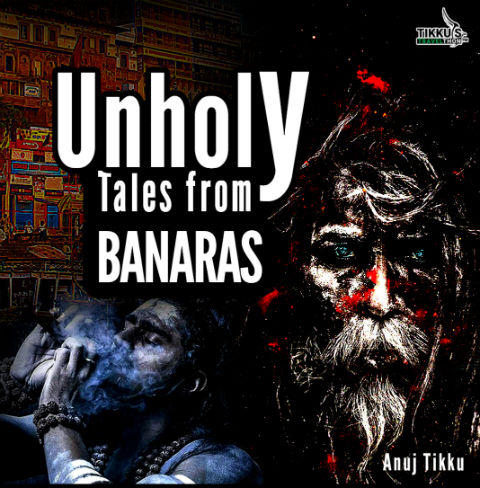 As you can see the cover page uses the dark theme. And, that goes quite well with the title and genre of the book. Banaras is famous for being a religious place, especially for Hindus. And, being one of the oldest functional city, it has narrow lines and ancient artwork, construction and sculptures available throughout. When you visit holy cities it is obvious to find Sadhus, Sages, Aghoris, Priests and other such figures there. Anuj himself visited Banaras more than once and being a successful travel blogger, he is good at capturing photographs. He wisely and effectively used photographs taken by himself for the cover page.

The cover page relays effectively the book genre (though you seem to find it falling in the horror zoner).

Being one of the holiest and ancient most cities in the world, Banaras is a crowded city where the day starts very early in the morning. The priests of the temple start their functions when it is still dark. Mahamrityunjay temple is one of the oldest temples in the city and the routine is the same for it as well.

The priest or poojari of the temple – Shyam Pandit took an early morning bath with the cold water and opened the temple and started doing his routine preparation for the morning aarti. When he was doing it, all of a sudden he collapsed on the floor! The onlookers have called the doctor and the wife of Shyam. The doctor confirmed that Shyam is no more! He considered it as a heart seizure!

An Aghodi named Chshma Baba was looking at the course of events and he concluded a foul play in the death of Shyam. He declared it a murder! He expressed his feelings and thoughts to Pitara, a snake charmer and a close friend of Chashma Baba.

Inspector Sharma is the investigating officer of this case. Will he consider the death a murder or accept the doctor’s report and close the file? Why Chashma Baba and Pitara considered this as a murder? Well, the short book explores the incidents in a not very interesting way to provide you the answers.

A spree of unholy events in a holy city – the concept is really fantastic and proven. Check any book by Dan Brown and you will find the same theme. And, they are very popular around the world. What matters is the central plot and the execution of the same. I must say that the plot has some really interesting elements and a few twists and turns keep the tale alive, but the execution could have been much better.

Some of the characters in the book are explored quite elaboratively. And they have some interesting qualities too. For example, he loves to wear Ray-Ban goggles, and that’s why he is known as Chashma Baba. Similarly, Pitara keeps snakes in his small container – so the name suits him. Same way, inspector Sharma’s character has some realistic characteristics. At a place he says:

Ok, we have a plan now I have a wife and a Kid to attend to, I can’t be stuck with police work all day, …

The author tries exploring some spiritual stuff in a logical way in the book. For example, the discussion about Lord Shiva’s family where the characters with opposite attributes live together in a calm and composed manner could have been a master-pice, but the poor proofreading failed it being so. He also referred “Garunda” as the vehicle of Kartikeya (or Karthikeya). Well, first of all it is “Garuda” not “Garunda” and second, Kartikeya’s vehicle is a “Peacock” and not “Garuda”. He also referred to the deadly dance of Lord Shiva as “Natraj dance”. Actually, it is known as “Tandav” (or “Tandava”). For a regular reader, it may not make much difference but it will not miss the eyes of curious readers.

Banaras (or Banares or Kashi) is considered as the best place on the Earth to leave the mortal world (i.e. to die). The author mentions this belief in the book, we, however, find proofreading mistakes here too.

Here are some more lines from the book which tries to convey the characteristics of the places explored,

Here are some character defining lines from the book:

The book lacks consistency, at one place Chashma Baba is referred to as – Aghodi and at the another – Aghori. The author also made a blunder by writing the following line:

Valmiki wrote Ramayana and Ved Vyasa wrote Mahabharata (along with their other works respectively).

The book has some interesting lines which are full of wisdom and life-lessons, for example:

Karma follows you its ways are slow but its outcomes definite and sure.

Some sentences have different words/phrases rather than expected ones, and they change the meaning of the sentences in an unexpected way. For example:

The author has tried infusing some relavent and interesting images at various places in the book, it it definitely works in the favor of the book. The imags are horizontal and while reaing in Kindle they may not look that effective. But they are chosen really well.

The author also tried to infuse historical perspective at various places in the book. For example:

The family had inherited the site from the Peshwa rulers. The Maratha worries who once controlled and ran the city of Kashi.

Some of the lines in the book are quite interesting and the reference of Sherlock Holmes and Dr. Watson will irk a smile on your face.

At this point, the awesome twosome looked like Sherlock Holmes and Watson. Chashma was Sherlock and Pitara Watson, these two to casts and Berbers of the Kashi Ghat’s had loved the mystery of the time death.

Some of the references, like Aghodis eating the flesh of deads, etc. maybe liked/unlined by the reader, based on their individual likes/dislikes; it is, however, a largely believed fact.

The bonus articles about the city and a tour of Banaras Hindu University; also have the same characteristics as the main story.

As said earlier, the twists are good but poor proofreading doesn’t let them appear as a shock.

The book, in no way, glorifies crime. The end of the book follows the law of Karma, and that is another positive point of the story.

The book is a thriller which could have been much better if the author has paid more attention to weaving it properly. Explicit attention is required on the proofreading of this book.