Posted by: Editor September 28, 2020 in Books, English Leave a comment

One of the most anticipated books by us here at Thinkerviews came out last week. The latest Cormoran Strike novel Trouble Blood by Robert Galbraith aka J.K.Rowling has reached readers around the world. Although there are some places where readers may be waiting for it due to delays caused by lockdowns, etc.

You can catch up on the previous books in this series here:
The Cuckoo’s Calling
The Silkworm
Career of Evil
The Lethal White

As the fans know, the signature coverpage for all Cormoran Strike novels features the detective and/or his partner in motion, chasing secrets in dark places. This one is no exception. 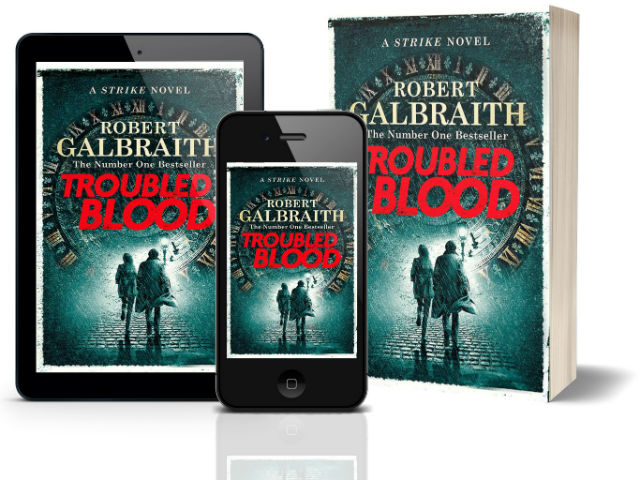 We have Strike and Robin moving on a dark, cobblestoned alley with a lone lamppost illuminating their path. There is a clock in the background completely surrounding them. The colour scheme of dark blue black with white edges gives the book that haunted appeal which is part of all stories that cover events past and forgotten.

Cormoran Strike is visiting his uncle Ted and aunt Joan in the village of St Mawes in Cornwall. His aunt Joan is fighting with cancer. While dealing with the sympathetic looks of the neighbors and village-folks, he is approached by Anna Phipps who would like Strike to take on the case of disappearance of her mother Dr Margot Bamborough.

Dr Margot Bamborough was a GP at St Johns Clinic in Clerkenwell and on one evening in 1974, she left the clinic, never to be seen again. It is believed that a serial killer Denis Creed aka The Essex Butcher kidnapped her and killed her, although now imprisoned Creed has never confessed to it.

Thus it is that the detectives take on their first ever cold case. They agree with Anna for an investigation period of 12 months. And so the journey starts.

As they obtain the police files and start contacting and meeting the people who were around Margot in 1974, it becomes very clear that this is going to be a difficult journey. Some of her friends and colleagues have died, some have disappeared and others are somewhere between their sixties to their eighties. To remember something that happened 40 years ago, clearly is not going to be easy. Memories age and change and people remember impressions rather than facts.

To make the matters more confusing, the investigating officer Bill Talbot was suffering from mental health issues and his approach to the investigation was not entirely factual. In fact, he had a separate book at home where he transferred his notes and clues and applied astrology to solve the puzzle of Margot’s disappearance.

As Strike and Robin get deeper into the case, they unravel suspects that are dangerous and deceptive. Meanwhile, they both struggle with issues in their personal lives while juggling the rest of the workload at the agency.

Strike’s aunt Joan dies. His estranged father suddenly approaches him to make up for the lost years and his troubled ex-fiancée makes another suicide attempt while on phone with him. Robin is dealing with a complicated and stressful divorce process with Matthew. She finds herself increasingly alienated from her family as her life deviates from the standard path of marriage and children, and at work she is putting up with a colleague who persistently tries to get her involved in a relationship.

All of these issues overlap on one another and cause fights and scenes, but eventually, the agency does solve the other cases.

However, the agreed period of 1 year is over and Strike and Robin don’t have anything concrete to show for their time and efforts. As the family pulls the plug on the Bamborough investigation, will Strike and Robin accept that some mysteries always remain mysteries?

As you can see above, it is yet another epic saga. Literally. At more than 900 pages, this is one of the longest books to be published by J K Rowling in the Strike universe. And so it will fare differently with different readers who are looking for a speed read or who are in to enjoy this phenomenal writer who puts together in a book a world that is lost and yet never changing. The huge canvas allows the author to build the world of 1974 where Margot disappeared but also carry on with a year of the lives of both Robin and Strike in year 2014. It gives us a chance to review the journey of so many characters from 1974 to 2014.

Looking back from 2014 to a GP practice in 1974 might appear simple, but it is not. Through Margot’s character the author shows us the rise of feminism in that era and how it is interpreted in many ways as access to irresponsible sex, breaking up of families, increased violence between men and women. Racism was still there and is still here. Women who worked as prostitutes suffered brutal tortures then and still do now. Men and women abused drugs and killed themselves in the process in 1974 and not much has changed. There were old fashioned mafias then and their progeny carries over in modern day world.

And then there is the astrological angle. It is just like a bit of added spice to the tale as J K Rowling shares some fantastic drawings with notes and clues hidden in it with a mix of zodiac signs, witchcraft and mythology. Those drawings are something to savour. J K Rowling continues to weave musical and cultural references into Strike and Robin’s tale just as she has done in the previous books.

What makes the book a page turner is that there is just enough tension. Now, couple of the previous Strike books, that tension was almost an anxiety for safety and survival of the detectives as they dealt with villains bent on a personal vendetta. In this book, however, the agency is in a relatively good place, making money and growing. The tension then is through frisson between Strike and Robin as everyone around them is trying to push them into a romantic relationship, while they are both in a place where they seek peace and solitude over love and emotional stress.

I did like how the author highlights that even in the so-called liberated, modern times, you somehow lead a diminished existence if you are single. No matter how badly the marriages are faring, how bruised and broken most families are, how most parent-children relationships are entangled into perpetual love-hate issues, it is still desirable over being single. But sometimes, for some people, fulfilment comes through a single, driving passion for what they do and it is near impossible to explain to partners and families why they have to do it. Companionship and friendship are so much more valuable in these circumstances that the last thing you want to do is lose that in hope of something more.

Ever since The Casual Vacancy, J K Rowling has shone the torch in the under-privileged sections of the society – those who are on welfare, are homeless, who live their lives in squalor and abusive atmosphere, and she continues to do so in this book. It is hard not to feel the pain and suffering of those who are set up to be victims of the necessary business of survival almost from the start. But she also highlights the jealousy and derision experienced by people like Margot who build themselves a decent life out of sheer hard work and brains. Humans are indeed inexplicable sometimes.

I did stay up a couple of nights reading this adventure which has no looming threats around each street corner and has yet enough tension and shadows to keep you interested.

It is a book for you to enjoy yet another year of Strike and Robin’s life. If you are just after the secret, it is still worthwhile the journey as they re-enact ghosts from 40 years ago and relive the macabre past and lives of victims of more than one murderers.

Hope you have enjoyed the Q/A session with him. And many of your questions might be already answered. Let us know that what do you think about this Interview session? Do you want us to ask anything else to him on your behalf? Do let us know. Also, let us know which other authors you like us to interview? Do let us know your thoughts and remarks via comments below. Do not forget to share this article with your friends over various social networks via Twitter, Facebook, Google Plus and others. And yes, you may like to subscribe to our RSS feeds and follow us on various Social networks to get latest updates for the site to land right in your mail box.