Posted by: Editor August 29, 2022 in Books, English Leave a comment

One of the oldest reasons for telling stories is to entertain an audience or make sense of a mystery through following logic and studying events from an objective viewpoint. And with the era of digital reading, India has seen a lot of new talented writers who write in the genres that blends elements from history, mythology, science fiction and adventures. Here at Thinkerviews platforms, we have shared quite a few works like that and here are a couple of links to explore such reviews:

Recently, we came across author Vadhan’s latest book called The Vimana Transcripts. As the book was free to read as part of Kindle Unlimited, we took the opportunity to enjoy it as we have previously explored the Shatru Kronicles series by the author and also connected with him through an interview.

We also got a chance have an interaction with Vadhan, here is quick link to the author interview with him.


Published by Treeshade books in 2021, The Vimana transcripts appears to be written in the same adventurous style as the author’s previous books – namely, Shatru, Agniputra and Fear of God. And here is our review of this book for you on behalf of Team ThinkerViews. 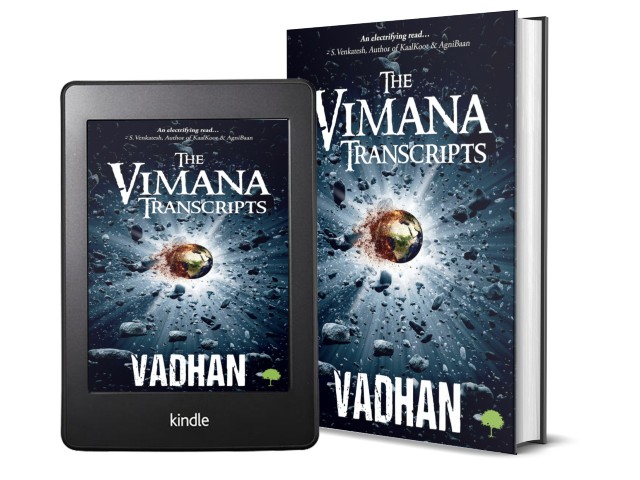 The cover is quite appealing in terms of the digital elegance and use of blue and white colours. It shows a glove of golden energy in the centre with and explosion of rocky clusters around it, hinting at the adventurous story within. When the browsers see the word Vimana, I think their first guess would be that it refers to an aeroplane and so the coverpage also shows that they are on the right track, if they are thinking in terms of skies and space.

After reading the book, I though that while the coverpage looks pretty good as it is, it would have been interesting to explore a visual image of the ultimate weapon that is uncovered to facilitate the end of the world…

It is just another morning for the eminent scientist Veda Srinivasan, until a phone call from a work colleague changes it in a way no one could have imagined. The crux of this development is that every country has received a message from deep space, in every conceivable language, that could be either a threat or a warning. Has it been sent through by aliens and will the world really end in a mere matter of days?

While the world scrambles to gather an answer, we meet our gang of dashing treasure-hunters – Vikram Rathod and his long-term associates get ambushed in America. By the thug known as ‘The Russian’, who somehow also has got a copy of the message and now force hires Vikram to find the meaning of the message and decipher the secret coded message within.

As Vikram journeys to India and manages to give a slip to the Russian, a merry chase begins. They get captured, escape, captured, escape again and so on. The travels taking them through ancient temples in Central India, Goa and eventually South India. On the official side, the prime minister of India calls an old friend and academic expert Avitav Deshmukh to help with the search. With help of Indian police and armed personnel these branch eventually merges with Vikram’s journey and the scientist who first received the message – Payal, also gets trapped into this chase.

Time is ticking, the second message is revealed and with every clue, professor and Vikram seem to be more often on the wrong path then the right one. Also, Vikram finds himself on the path to reunite with long-estranged family members who are also facing dangers.

What is a Vimana in the message? What is the answer to the secret coding? Will the adventurers find all the answers they are seeking?

The book quotes the following lines right at the beginning:

Our law of peace

Which should give us an idea that the book will explore the balance between masculine and feminine energies as these are needed to shape the world in some ways. And that does happen, as the final piece of the puzzle is decoded. But, we will not give any more hints to keep the spoilers away…

As the author discusses in the prologue, he has taken the inspiration from a well-known vedic verse and used his creative imagination to create these adventurous journey where he gives us an interesting theory as to what could be the meaning and manifestation from the verse.

Dark is the descent

The birds are golden-coloured

Up to the heaven they fly robed in the waters

Again descend they from the seat of Order

And all the earth is moistened with their fatness

Twelve are the fellies, and the wheel is single; three are the naves

What man hath understood it?

Therein are set together spokes three hundred and sixty

which in nowise can be loosened

The verse has been popularly meant to indicate the passage of time, or seasons, or something yet to be deciphered…

Although I have not read all the previous works by the author, by the time we meet Vikram Rathod, we do get a sense that these characters have been introduced to the readers before. Vikram’s bond with his late father, his current collaboration with his father’s friends and then later the discovery of lost family members, all these threads have some background which may be explained in other books by the author.

Vikram displays all the famous qualities – Indian Jones or Lara Croft types- required in a treasure hunter – languages, intellect, fighting skills and a healthy bank balance. His American assistants give just enough basis to make the dialogues feel like they are straight out of a Hollywood movie, laced with American expressions, so they don’t feel out of place. Later, the author does the same when he tries to give us dialogues from people from variety of countries. These could have come straight out of a TV screen or a movie. All these keeps the book’s entertainment quotient high.

Other characters come and go and not feel much out of place in their respective roles. The likeable professor Deshmukh will stay with you for his is a larger sacrifice for the greater good. Payal – as Vikram’s love interest – is given beauty as well as brains.

As the book is focused on solving a puzzle that takes the teams through various temples, the author shares with us quite a few interesting facts on temple architecture as well as some theories about how some of the ancient shrines were built and of course, how religion is a building element in a productive society:

Is there another social order that can make people behave? People are afraid of the law because of punishments, but they obey religious tenets out of free will.

Religion is mankind’s oldest social order. Hinduism is a complete social order derived from universal truths that dictates and provides a path for a human being to take in every walk of life – from childhood to death. It provides solutions from education to retirement. God is just one aspect of Hinduism, not its goal.

The author discussed how Dashavatar are sometimes seen as representative of evolution and then shares a concept called involution:

Involution is opposite of evolution – internal refinement of the self. Involution allows you to destruct your ego and the concept of self.

Such concepts and the action sequences make the book an enjoyable reading experience, but a better editing could have helped keep the timelines tighter. There are a few typographical errors in the Kindle version I read. For example, on page 320, the word is repeatedly spelt is ‘ferries’, instead of ‘Fellies’, which is a structural component, previously referred in the description of the Vimana. The author also refers to Swami Dayanand Sagar as the founder of the Arya Samaj. This should be Maharshi Dayanand Saraswati. It is unclear, whether this is a genuine error or a fictional character created to resemble real-life ones.

The final steps of solving the puzzle and discovery of the saving weapon are one of the highlights of the book and explore a mythological concept very interestingly. The book is also enjoyable for its exploration of family dynamics and loving relationships. In my opinion, following is one of the best lines of the book:

Time was all people could offer one another. It was the most precious commodity on earth. Once that ran out, door to loved ones came shut. Forever.

In summary, an entertaining, adventurous read for a rainy weekend.

Blinded by the Lights By Jakub Żulczyk | Book Review

Previous: Grandest Revelation – The Exordium by Anubhav Anand | Book Review
Next: Why Kolhapuri Chappals Are a Must Have Ethnic Footwear