Recently we got a chance to read a book titled Shatru – Kronikles – Book – 1 by debutante author Vadhan (full name: Bommadevara Sai Chandravadhan). The book takes you in the land of fantasy where the things are quite inspired by Indian mythology. 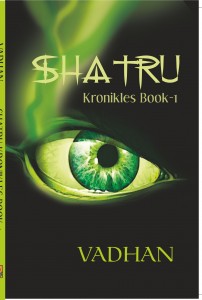 These days, retelling Indian mythology becomes a kind of fashion. However very few authors makes a mark by exploring it logically and adding contemporariness to it. So we decided to go ahead to read it. And, here are our personal Views and Reviews for this book.

The book starts like a murder mystery where a lady (Kausalya) who is working at a key position in a very big organization is murdered in her car in a rainy night. She was on the way from her home to the office. Ajatshatru (also known as Shatru) is given the task by his superiors to find out the truth about the murder. He is also known as Hunter (as he hunt for the criminals). While he was made some progress and started getting some clue about the creature who could be responsible for the murder; he was asked to stop the investigation!!!

Why he was asked to do so? Is there some mystery which needs to remain covered?

If it was not enough, his father and his dog are attacked by someone in a way that he got the message to continue his investigation. If he don’t he have to be ready to lose his loved ones!

Now, the things are more complicated, by continuing the investigation he will have to feel the wrath of his superiors, which are, well – the guardians. Whom, no one dare to go against. What happens ahead is the rest of the book.

The character of Ajatshatru is the strongest in the story. His nature is well explored with some dialogs like:

Don’t do that again. I might not be as powerful as the Disparate, but I can throw a mean punch

During a fight, he challenges his opponent as:

I am the one the Guardians call their finest, the one the High Lords of the higher worlds and Overlords of the lower worlds do not question. I can see into all fourteen worlds of power, the other side of Creation (that wasn’t true of course, no one could see into that place. There were stories about it) and you thought you could what, kill me? You bloodless parasite, you thought that?

So he is crystal clear about what he needs to do and he can go to any extent to complete the task he took in his hands. He is ruthless there. However we see his emotional side as well. And yes, his presence of mind is also shown at various places in the book.

The book have some philosophical yet realistic dialogs. For example the following one (which is spoken by Late Kausalya’s father):

A man’s home is his castle and some … thing had invaded my castle, vandalized it, metaphorically speaking of course. I did not let it rest.

The author took good care of letting other characters get explored as well. There is one assistant given to Shatru, named as Kris. His character is energetic, youthful, a little more emotional, not very calculative (as he is just starting his work in field), but a honest and loyal friend. The bond between Kris and Shatru is explored well. This is a sample conversation between them, when they are on mission:

“One step at a time boy, when we get to that bridge, we’ll cross it.”
“And what if we can’t cross it, what if it’s too big, even for you?”
“We’ll burn the friggin’ bridge down and build a new one.”

And Shatru’s caring nature for his apprentice is shown as

“This game has gone far enough. There is nothing here for you,” he said softly.

In addition to crime, thrill and fights, the book have some funny moments as well, for example read the following lines:

Cauliflower Head grimaced, which meant that the rubbery skin from his neck down to his abdomen scrunched into itself. “His father, the one that cannot be named,” the creature said.
“Why not?” Kris barked.
“I am sorry mighty Sun God’s rays, what exactly do you mean when you say, ‘why not’?”
“Well, why cannot he be named?”
“Err … that’s his name.”
“Oh!”

When you start reading it, you might started linking it with the Famous Harry Potter books’ antagonist, Lord Voldemort (the one, who cannot be named). But, it ends into some funny dialog.

The protagonist’s name is Ajatshatru – which means the one who doesn’t have any enemy, but he is referred as Shatru – which means enemy! You may wonder, why? (Or may found it quite improper also, based on your Linguistics knowledge). The author however justifies it in two different dialogs in the book:

I don’t have use for all the softer emotions, I am better off as Shatru – the enemy!
AND
“Is that why they call you Shatru?” the boy yelled, “Because you use anyone you can to get what you need? You are more an enemy than a friend, do you know that?”

Vadhan himself seems to be a big fan of fantasy books, he put the following lines in the book:

Are we in Narnia?” Kris asked in amazement, drawing reference to the C.S. Lewis novels of the same name.

And yes, he have added some contemporariness in the book by having some references of movies, sports and other happenings. For example:

After the sixth bottle Shatru started to feel slightly better than a cricket ball after a T20 match.
AND
That’s funny; I thought all aliens on Earth ended up in America.

Book Teaser
Here are some more interesting lines from the book:

The book links various mythological aspects of ancient Indian literature in quite effective manner. It even mentions why Devas are called as Adityas. The idea behind the song of trinity is quite fascinatingly told by the author.

Well, telling much about the book content will reveal the content of the book, and if you know too much, you won’t enjoy it while reading.

We must count the detailed preface and the glossary as positive attributes of the book.

So there are many positive aspects in the book. However there are some downsides also. For example, read the following dialog:

“This is getting really complicated, Boss!”
“Isn’t it? Anyway, Bind is a true blue Asura, Half-Royal lineage. He’ll know what’s going on in there.”

The cover page is not very attractive. There are some places where you expect a separator to denote a new scene is started. And there are some formatting issues we found (which may not be there in the printed edition, we read the E-book). The book have some grammar errors as well: 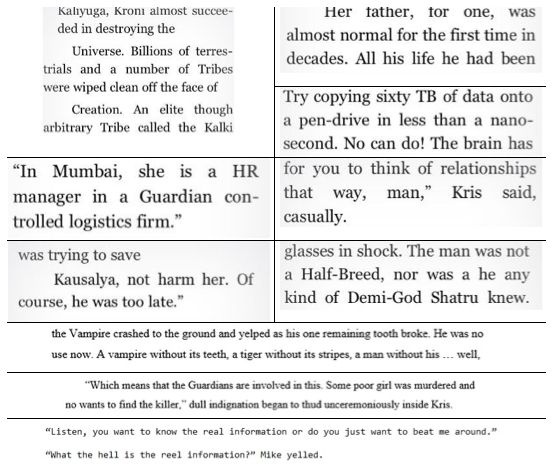 Formatting, grammar and other issues in the book

The business link between various clans are not very properly presented and it is tough to digest. The book starts with a murder but it doesn’t keep you glued since beginning. As there are many things going on, you have to wait for a while to develop interest. If you read till more than 40% of the book, it is a good ride then onwards.

The book takes off slowly, but from chapter 10 onwards it is a fantastic ride. Also the author tries to club so many mythological stuffs under a hood, he succeeds at a level for sure, but there are some loose ends as well. However it is the first book of the series and before reading the remaining parts, it would be improper to talk about the loose ends in terms of continuity. The book is a good read if you love mythological stuff in remastered manner.

PS:
We have had a conversation with Mr. Vadhan and it was an interesting session. You can read the full interview here.
Over to you