Posted by: Editor August 25, 2022 in Books, English Leave a comment

As we mention here often, one of the best perks of being book reviewer is the opportunity to connect with authors and a chance to read their books. In a similar way, we connected with author Anubhav Anand and received his book called Grandest Revelation – The Exordium, a start to a fantasy series.

We extend our thanks to the writer for providing us the review copy and we are happy to share our review of this book with you. 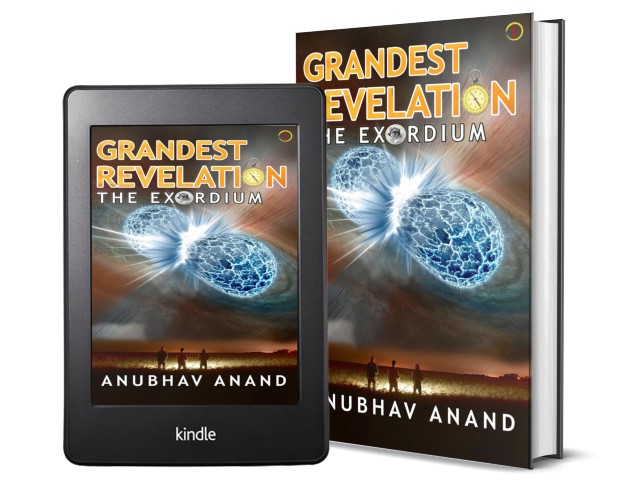 As this Science-Fiction talks about various elements of Astrophysics, having an illustration of a big explosion on the cover page makes it faithful to the genre. The crystals displayed, the aura expanding,… and all other elements of this illustration looks really good. At the bottom of the page, you see a grand site where a few people are looking at some event happening. It belongs to the story and adds detail to the cover page.

The author takes us to a remote place in the Universe, where a chain of events is being concluded – or being set in motion, with death of one of the oldest stars.

On Earth, Arthur Kane Davis, is contemplating events and continuing his preparations for the war that will inevitably come. His associate Mark Jones is tasked with finding and fetching Ravin Bhan, Grisha Hathaway and Shawn Hammer. These young people have special abilities and will need all the training Davis can provide if they are to fight the battles heading their way.

Unfortunately, the enemies are also hunting for such personnel called Demistars. And the hunter Arrakis discovers Shawn before Mark Jones. Although Arrakis leaves to report his findings to his master – Leige Lord Ras Alhague, the secret is out.

We find that there was a war millennia ago, between good and evil stars – called Prognast and Entagnast. The good guys lost and went in hibernation and now Davis is trying to get them all together again to end the evil side. As Arthur and Mark start scouting the universe to find as many allies as they can, stars and their offspring, Ras Alhague has taken over the Ministry of Heavenly Bodies and is also exploring the galaxies for the missing part of the divination that can predict the future.

The young Demistars escape the training ground for a small mission, which turns into a disaster. There is no option left now for the Prognast, but to to go to the headquarter of Entagnast on the planet Bolvia and hope that their attack comes as a surprise.

Will the Prognast members stick together in times of trials? Is it even possible to end the Leige Lord and his dominion? What does the divination about such war predict? And is this just the beginning of another war?

I liked the concept of the book – imagine if star kids were literally kids of the stars in the sky? The author takes that idea and builds an interesting cast of characters as he gives personalities to these celestial bodies and makes them walk, talk, have children and fight in the war between good and evil stars. Anubhav Anand pitches some interesting theories about how the stars like Sirius and Vega could be source of personnel with special abilities.

With Arthur Kane Davis, we have the good leader, the father figure, the strategist, who has been surviving for thousands of years and trying to fight the good battle. With Grisha Hathaway, we have a street vigilante, who fights the drug lords and criminals to save the victims. With Shawn and Ravin, we have two young men looking for answers. And with Mark Jones, we have the faithful commander, who will see the battles through.

But through the journeys of all these characters, there is also a tinge of sadness, about how we seem to suffer from the faults that lead us to grief, whether in personal life or big wars:

Greed, need, or some kind of malice can produce negativity inside anyone.

Sometimes, in just a matter of seconds, the pride and the confidence drift apart, only because you perceive something which you dreaded of happening.

A dent of carelessness and life could be lost, discarding the significance of that life in the society.

Every action has its own path – the path where clairvoyance cannot be defined or concluded, the path, which connects certain aspects of life to an undeniable truth and can have no reason with.

The author ends every chapter with a quote about the situation or events in the chapter, some of which are really interesting:

Each and every revelation has a string attached to it – the string of annihilation.

Though not perceived – the delusion of tenacity has always been uncompromisable when it comes to coincide with being unbreakable.

Hail to the imperativeness of one’s identity, for the recuperation of it, once diminished, can prolong to eternity.

Beware of the salvation, for thou art being deceived by the delusion…of impermanence.

Willingness to survive does take a toll on people, even though when they are informed by the fact that survival comes with a cost.

Devising a plan of action has always been a crucial task done by mankind…only to be kicked by the non-considerable fate – that is waiting for them…with its open arms.

While the concept and characters have potential, the letdown for the book is that it is difficult to read. The author uses language that is slightly different from contemporary English, and the reader struggles with grammatical anomalies throughout the book. There are also quite a few typographical errors. The book would benefit from sound proofreading and corrections.

In summary, a good concept and cast of characters engaged in celestial battles will entertain the readers who do not mind some reading challenges.

Previous: The Gods Are Not Dead by Author Abhaidev | Book Review
Next: The Vimana Transcripts by Vadhan | Book Review