Posted by: Editor2 August 9, 2022 in Books, English Leave a comment

With the time, the taste of the readers also change. It brings new lingo, kind of setup, type of stories to the market. And, thus also invites talents to explore the different zone of storytelling.

Recently we got a chance to explore The Unproposed Guy by authors Suhana Bhambhani and Bhavik Sarkhedi. While Bhavik is already a published author, this was the first experience for Suhana.


The title of the book – The Unproposed Guy – is intriguing in itself. And, it also reflects in the title of a couple of chapters (with a twist). 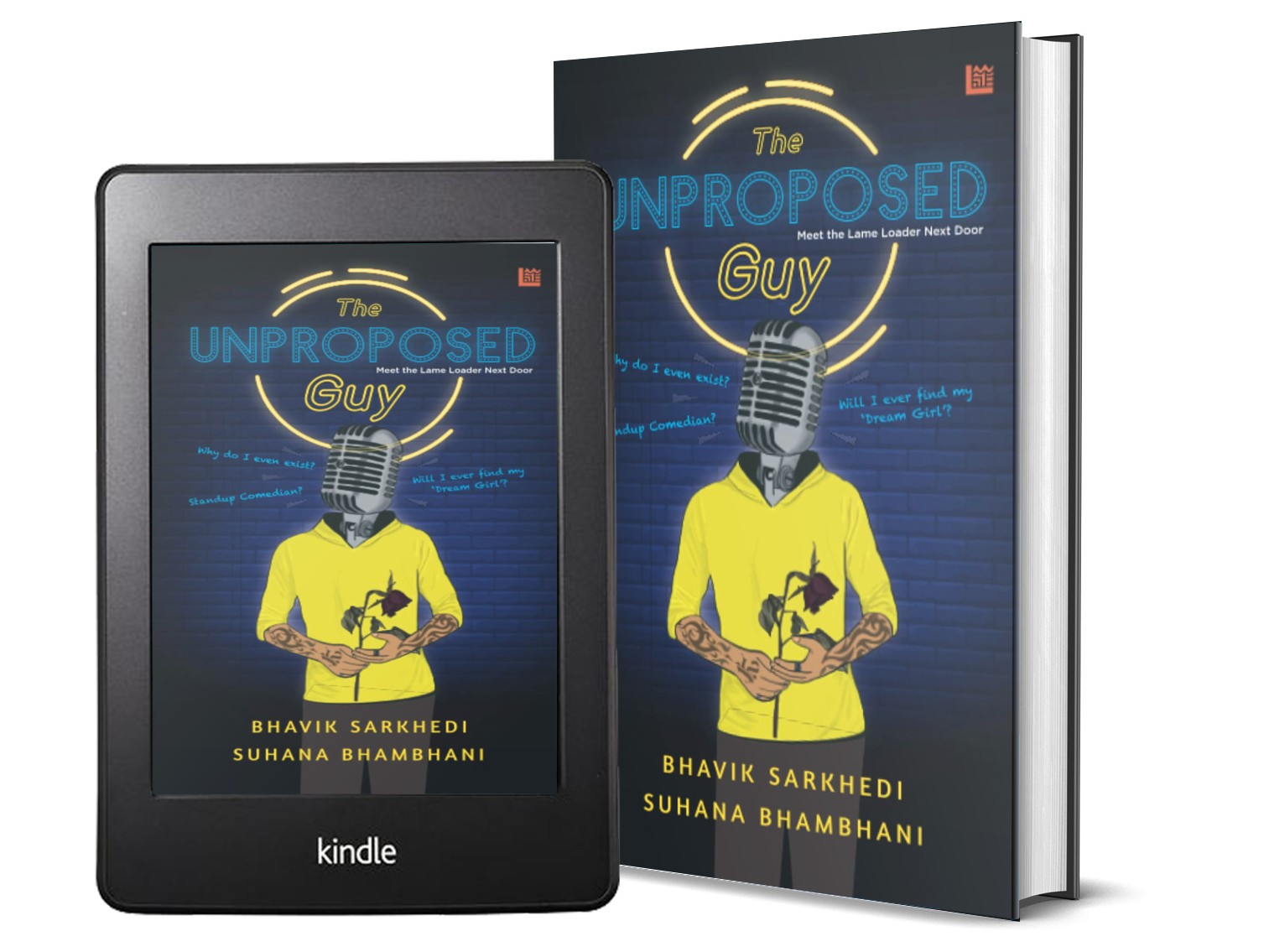 As you can see, the cover page shows an illustration of a stand-up comedian. The sparkling elements with neon shades makes it a little more attractive. The way the designer has replaced the protagonist’s face with a mic, works in favor of the cover.

The story belongs to Kevin, a young fellow who is getting married to a person he love. Seems normal? Well, you need to explore the story to see if it is going to be just another traditional Indian wedding, or are there some surprises waiting for the reader.

Kevin’s younger sister Tina, elder brother (a kind of perfect family member) Zubin, Kevin’s parents and Kevin’s group of friends are all happy for him.

Kevin has a kind of non-traditional career! What he does? Another college graduate or engineer?

The story moves forward in a linear manner where majority of incidents are explored as flashbacks, and coneys how certain things happened and how it impacted the persona of the character they happened to.

I think telling more than this will include spoilers.

Contemporariness is what works in the favor of book. Be it personal, social or professional situation, the authors are able to add reflections of contemporariness in it. The language used throughout the book also shouts the same. What I like the most in it is the way Indian culture and morals are weaved nicely. Without preaching anything, they are reflected naturally.

For example, despite being compared with his elder brother for almost everything, the male protagonist doesn’t ever speak ill of him. The bond between the brothers doesn’t get affected by any such comparisons. Even some shades of their persona are quite opposite. They both however goes perfectly in-tune with each other. Same way, the male protagonist doesn’t try to shunt his sister for expressing her feelings for anything. The way the siblings communicate and entangle with each other shows the core of family values.

The bond of friendship – the only relationship we chose – is also at the core of the story. Friends are not only to share joy with. When the need arise, they stand for each-other. And, of course, they pull legs (not only!) of each other as well. The way your siblings feel safety and warmth in presence of your friends, is something precious. The book directly/indirectly conveys these messages.

Of course, there are references of adult content and even LGBTQ which makes the book exclusive for mature readers. Especially the second half of the book falls in this category.

The readers in their twenties and thirties, especially from the urban areas will be able to connect more with the characters of the book. I must say that the authors have paid due attention to almost all characters. And yes, there are references of CORONA as well.

It is the first book I came across where the protagonist is a stand-up comedian set up in the Indian environment. And, these days, a lot of young people with creative minds and entertainment skills are thinking about such careers quite seriously. So, this book is a reflection of something happening in the current society. Considering it just “fiction” will do injustice with it.

Co-authoring would always be a challenge. It may work smoothly (comparatively) when one is a very senior and popular author and the other is seeing him/her as a mentor. In those cases, sometime the initial drafts are prepared by the junior one as per the mentor’s guideline(s) and is eventually curated by the mentor. But, when both of them are giving creative inputs, only maturity and positive attitude, makes the project accomplished in a way expected. Both the authors of this book Bhavik and Suhana have done a smooth work in this book. And, from a reader’s perspective, you don’t find gaps in the narration, which could have been seen otherwise.

The book also has some interesting lines showing the command of the authors over the language. For example:

I do look good. Maybe…okay?” As his reflection shone in the mirror, Kevin murmured to himself. It was a big day for him as he was getting married. He took in a gulp of air and breathed out. The early May sun peeked out of the white clouds. A pleasant breeze from the north rustled in through the window as sweet strains of wedding music drifted across the venue.

Here is another interesting block:

Humour is simply any act, word, or phrase that causes laughter or evokes a feeling of pleasure in an individual. It creates a light-hearted atmosphere. The word ‘humour’ was derived from the Latin word for “liquid” or “fluid”. The ancient Greeks used this simple word to refer to the four main substances found throughout our bodies: yellow bile, black bile, blood and phlegm. Each of these bodily fluids were thought to influence our personality traits or overall character, as stated by Mayer (2019). Humour comes in many forms, shapes, colours and even odours—from the memes that we all love, to those silly jokes that we sometimes create, to impress that cute guy or girl or to just lessen the tension in a room.

And it is not only about long details only. I like the following line in the book where the authors have talked about innocence of a character.

Fourteen I was back then, innocent fourteen, the age when the only Sunny I knew was Deol.

Found the analogy interesting?
There are many such lines in the book. Here are a few random examples:

There are some philosophical yet real advices that you may find worth quoting.

And yes, there are satirical takes on various stuff infused quite smoothly.

The authors have showcased their poetic sides as well :). Here are a few such lines from the book:

The boook also contains some interesting abbreviations and definitions. I am sure the readers, especially young ones, will find them interesting:

MFF aka My First Flirt.

Paytm ka Almamater = Cashback
Instagram = I want to be with/like Snapchat
Snapchat = I am taken
Twitter = I am committed to 140 characters
Reddit = I am the origin of everything on the Internet
Quora = I think I am Reddit for Indians
Wikipedia = Sadly, I am slowly turning into Quora

In addition to exploring emotions effectively through lines like:

Bruno had saved Kevin. It was an unforgettable trip for him as he almost lost his life but also lost his dear friend, Bruno.

; the author have also talked about psychological identity theory, and four stages of identity progress.

Of course, there are some sections in the book which could have been better. For example the authors used words like “introverted” and “extroverted” personalities. A common mistake many Indian authors make. Some cuss words are there and as said earlier, the second half contains some adult material as well. There are some lines which could have been write better to convey what authors have intended:

These quotes must have given you a fair idea about the book and its writing. Based on your preferences and likes/dislikes you may decide to go for the book or skip it.

It is a small book with easy language and you can easily read it over the weekend.

A contemporary fiction added with the flavours of comic and satirical stuff written in the Chetan Bhagat style. If you love exploring tales setup in the modern upper-middle class environment and don’t mind some adult stuff, the book is for you. Keep it away from underaged readers.