Fantastic fiction is an all-time favourite genre for us at ThinkerViews and we are always exploring various authors who create their own niche paths in this area. Sometimes, also termed as high fantasy, most of such works have their basis in established mythological or folk stories that have survived generations and tell the tale of gods and demigods and struggle between truth and lies, light and darkness.

This year, we are reading the Wheel of Time series by author Robert Jordan, but we have also share our reviews on authors like Raymond E. Feist. Here are a few links to reviews of fantastical books:

As you can see, most of these works are from authors based outside India. While, there has been a popular resurgence of re-interpretation of Indian mythological tales by numerous authors, it is not very often that you find a modern writer creating a new world of stories that take familiar legacy concepts and weave them into a new tale. So, it was delightful for us to find author Sangeeta Bahadur’s Kaal trilogy. We had bought the first book of this series a few years ago, and can now share our reviews of the whole series with you one by one. 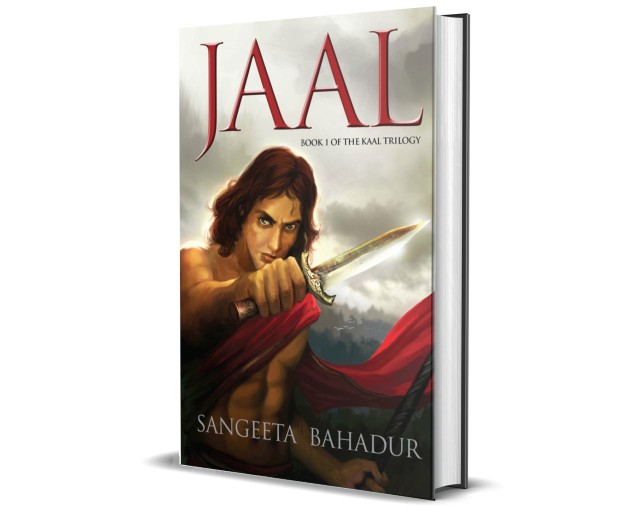 As you can see, the cover page is not flooded with many elements from the story. A warrior is seen wearing dark red attire and having a knife with menacing eyes full of rage. While the cheerful colors used in the design catch the user’s attention, there is a scope for lot of improvement and make it really appealing.

The book starts with the shadows of prophesies colouring the days of the world that is largely unaware of the catastrophic beginnings of awakening of a God – an Adhideva – who is stirring from his prison of dreams. Aushij – as he is known to the world – will rise and his rising will bring inevitable destruction in its wake.

In the southern kingdom of Kozirupam, usurper Trishiras has just beheaded his king Panimaan, and there is nothing left for Mahishi Vagdatta to escape and eventually hide once she discovers that she is carrying Aagneyi – a daughter and heir to the throne. In the northern regions, the rishis of Samyati Kul are aware of the signs that forecast birth of a special child. This is confirmed when a marut brings the news of the birth of the Devanampriya and maharishi Pratishravas and his brothers are tasked with safety of this child.

But already the tiny life is in danger – or shall we say lives – as the troop of Serpents is already closing on the village. With help of a yaksha they are systematically burning every house and killing everyone they come across. The rishis discover that they have a pair of twins to look after. In the battle between the rishis and Rudhiraksha, one child is lost. And so it is that the boy Arihant is raised by the Samyati Kul while a girl Raudraa is raised by Trishiras to become the weapon of Aushij.

When Arihant is fifteen, a chance encounter brings him to the notice of the agents of the sleeping God and he is hastily sent away from his home in the Janpad of Shringaali. Trouble soon finds the young boy, but he also finds Bhootnath, a malang who becomes his second guru and together they travel to the hill kingdom of Tilhut. Here, Arihant defeats four White Demons to save the life of crown prince Brihadrath and discovers a darkness within himself and terrifying bloodlust, but saved by Bhootnath from succumbing to it.

When Ripudaman – the alias they give to protect Arihant’s identity – and Bhootnath leave Tilhut, Brihadrath and a company of soldiers accompany them into Shvetkeshi moutains as escort. Little do they know that they would be attacked by a massive cluster of wolves, and just as they are getting over the massacre, Arihant is called by a creature of mystical powers – a tiger that is more than a tiger. It looks like the Mayavi beast will be the end of them, until Bhootnath disappears and takes the tiger with them. And so the leftover party of five carries forward, only to find that somehow they are travelling backwards.

Soon, they are taken captive by mystical people who live inside the mountain. As the attempts to escape fail, it looks like Arihant will become the sacrificial lamb. Instead, the Vakrini becomes the third guru for Arihant and takes his education to a new level and with her help Arihant becomes the young warrior that he is destined to be.

As finally, Arihant reaches the ashram of rishi Advait and meets yet another prophesied friend, it is clear that wheels have been set in motion. Both sides are aware of each other’s strengths and games and attempting to get a better hand in their little battles, until the Mayadhipati will arise and the Devanampriya and his/her companions will have to match their mantles with a God…

Let me start by saying that I thoroughly enjoyed this fantastical world which has echoes of the Vedic lore and could have existed in somewhere similar to the Indian subcontinent in a slice of time that our collective memories have forgotten. While it is bound to bring back memories and ideas you may have come across in the religious and mythological stories, it is best to explore this book with an open mind and enjoy the wonder of ‘what if’.

Author Sangeeta Bahadur weaves a complex tale with multiple protagonists – like Dashkumarcharitam – we have Arihant, Raudraa, Aagneyi, Ritaayu and Jayant. And then the supporting cast of Arihant’s family, Bhootnath, Vagdatta and Shubhvarman, rishis of the Samyati Kul and not to forget the villains, who also are all calculating, cold men, killing their kings and subjects with equal ease and little concern. And there are the multiple gurus of Arihant as he learns the lessons of life – spiritual strength of the Samyati Kul, renunciation of Bhootnath and the learnings of the universe, creation and the formulation of Arihant. As he takes on the challenges of dismantling his self and being reborn, forged into a weapon that will stand a chance against a God like Aushij.

We are all possibilities existing in the mind of the nirgun, and

Tend to be realized when circumstances fit each other in a certain way.

But, you, are something more…

All of Arihant’s stay in Surangini is surreal and his education and training more so, as the author uses a rhyming verses to tell us the story of Vakrini, and the ebbs and tides in the wars between Aushij and his enemies. I quite liked the way author has moulded the supernatural powers – siddhis – into Adbhaavas granted by forms of Shakti, for example Maa Hemangini gifts him Sukshima – the Adbhaava of Invisibility. Armed with the eight Adbhaavas, Arihant can transcend all aspects of physical universe including space-time. He appears to have completed the journey to understand self and can now go back to the world where he is bound to run into traps set by Aushij. The author has created a beautiful setting and training sessions and these sections are much enjoyable.

While the celestial dance and Arihant’s journey is the central thread, I also liked the stage of this world and as it features the worlds from empires of northern Avrohan to southern Kozirupam, to the hilly kingdom of Tilhut and the democratic Janpad of Shringaali, which stands as a beacon of simple living amongst its greedy neighbors:

A complicated way of life does not necessarily make it either sophisticated or advanced! Is materialistic self-absorption sophisticated? Is regicide? True, the empire is rich and powerful, but given a choice, I would rather live in a country where I do not have to kowtow to a fellow human being simply because he sits in an ornate chair and wears jeweled headgear.

The world may be moving in a different direction, but movement is not always growth. Sometimes its simply madness, and madness is usually self-destructive.

As this is the first book of the trilogy, we can see how it shows us the formative years of our young warriors and their various training and tutors. The book also does a great job of setting the stage for these characters and one of the most enjoyable aspect of the book is the language itself. The author is writing an epic and so has tried to give us an epic style of writing by rich and beautiful detailing of this world and its characters.

It is, however, not an easy or a fast read, to be completed in a few hours of time. Instead, it is a book for readers who take their time over taking the descriptions to build images of such world in their own minds and savor the details.

However, the book could have used some more edition and shifting around of narratives to give it a little more pace and space the trajectories of all characters a bit more evenly, giving the reader more chances to stay with the tracks of all protagonists.

In summary, an impressive start of a fantastical world that is familiar and yet anew and will suit readers who like complex, detailed and richly imaginative fantastical tales….