Home / Books / The Inspiring Story of Zoho By Ashish B. | Book Review

The Inspiring Story of Zoho By Ashish B. | Book Review

With the popularity of TV Shows like “Shark Tank India” amongst others, more and more people are leaning towards entrepreneurial journey. Of course, the nature of a person is almost pre-defined, but, when you find some supportive explorations and similar cases executed successfully, your confidence in your central thought gets reinforced for sure.

If you want to simply earn money, I think, doing a job is the best way.

But, if you have different perspective towards the journey of earning money, there may be a few reasons for you to walk the entrepreneurial path. Of course, your few reasons may be different from those of the others. Maybe there is a single reason you want to launch a start-up and move ahead. Maybe your goal is start a business, make it profitable and sell it. Maybe you want to try the whether you can do a business or does your idea has a practical potential. Or, maybe you want to change to things and make an impact. There could be hundreds or thousands of possible reasons, you want to do a business.

Even if you don’t want to walk this path, then also, it is good to explore such journeys. It changes or evolves your thought process.

With this vision.. Here are our thoughts about the first four books in this series.


Let us continue our quest to find more such inspiring stories by talking about The Art of Bootstrapping to Billions: The Inspiring Story of Zoho (Indian Unicorns).

It is worth to note that this book is a little different kind of a project for the author. As mentioned in the book:

This book is a collaborative project with the support of the Tamilpreneur team, who are on a mission to create one lakh ‘Tamil entrepreneurs’ by 2025.

Let us take a look at the cover page of this book:

At the same time we also acknowledge the fact that attractive book cover are often found responsible for many book picking/purchasing/reading decisions. 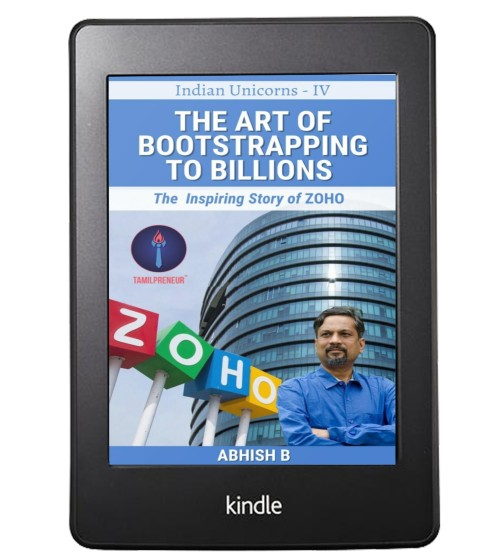 The Art of Bootstrapping to Billions: The Inspiring Story of Zoho (Indian Unicorns) By Ashish B. | Book Cover

As you can see, the cover page of this book looks like that of a reputed Financial magazine. The bluish skyscraper in the background represents the huge success of the company. The number of glass walled offices reflects the huge client base the company has.

The photograph of Mr. Sridhar Vembu, the man behind this company reflects his persona. The letters ZOHO are represented quite effectively.

An attractive cover page from my point of view. What do you think of it?

Usually we talk about a book in two distinguished segments, dedicated to the book story and our views for the same respectively.

While the application areas of PayTM, Zomato, Byju’s and others unicorns are widespread, people already know about their work functions. The firms like Zerodha, Zoho etc. belongs to a specific working area. People belong to the respective aras know them quite well. But, for the other readers, they needs to be introduced properly.
This book lack a formal detailed introduction about Zoho and its work functions. As per my opinion, it should have been included.

The book is a swift read. It tries exploring the journey of a boy from a traditional, small village in India to becoming one of the most remarkable tech-prenuers in the recent time. It comes directly to the point. And, for short books, it is an essential requirement.

The book in first few lines summarizes the achievement of Sridhar Vembu, founder of Zoho, quite effectively. It says:

This is the incredible story of an ordinary boy from a tiny village in Southern India who wanted to better the reality he lived in.
He actuated his ingenious take on social and educational reforms and is now a Padma Shri awardee.

Sridhar was born into a middle-class family of agriculturists in the village of Umayalpuram, in the Thanjavur district of Tamil Nadu, India, in 1968. He conquered the journey of being a hardly known boy from a humble background to the recipient of the Padma award! It is quite incredible journey, indeed.

And, then the author goes ahead and talk about ZOHO:

But Sridhar Vembu has much more to offer and has grand plans for the future. The CEO and founder of Zoho, Sridhar Vembu, describes the company portfolio as “The Operating System of Business” – aptly capturing the essence of their offering.

To re-inforce the belief that one can reach his/her goals with dedicated hard work in the right direction. The family background, the exposure to resources etc. makes a little difference, if the earlier mentioned attributes are in place. To inspire the readers the author also mentions the fact that Sridhar has attended Anjugam Higher Secondary School, the available one in his area. So, just forget that you need to be educated in a prestigious school in a metro city in order to achieve remarkable feat in life. Of course, it has its own benefits and no one can deny it. It would be a great help to a student if he/she can attend such institutions. My point here is simple, not being able to attend it, cannot be a hurdle that cannot be conquered.

Eventually Sridhar’s family moved to Tambaram, a neighborhood in southern Chennai. And his higher secondary education was happened here.

The people who have sheer will do something remarkable trust their instincts and beliefs so much so that they often started being considered as rebels. In Sridhar’s case this seems to be true. I would like to quote an incident from the book in this context:

Although Sridhar’s father had wanted him to take up Computer Science as a specialization for engineering, being a defiant teenager, he chose electrical engineering to be a ‘true’ engineer and build computers.

Like many successful people, he was also fond of reading.

He would spend hours in the library lost in the works of Bertrand Russell, Ayn Rand and George Orwell.

I am quoting these segments as some of them are nothing less than important life lessons. The book also talks about Sridhar as a student.

Sridhar claims that although his records were good, he was not truly academic-oriented throughout his tenure as a student.

He viewed examinations as something to be endured in the path of true learning and dutifully studied only a day or two before the scheduled tests. He claims that his batch of ’89 at IIT Madras was notorious in attendance and was directly responsible for the institute’s decision to enforce minimum attendance regulations the next year onwards.

As he wanted to do something impactful, he pursue his studies seriously. He moved to Princeton University, New Jersey, in 1989 to pursue an MS in Electrical Engineering. Being open to the options and opportunities to progress forward in careen and life is very important. And, Sridhar learnt that lesson at the right time. His experiences in foreign has its own effect. The author quotes:

He noticed that in any foreign locations, nothing made in India was ever available.

And the impact was, rather than settling down in USA, he came back to India.

… with a singular objective – to leverage the power of capitalism and use the economic machinery to make attempts to resolve the nation’s pain-points with the help ..

Eventually Sridhar and his brothers, Sekar and Kumar, partnered with Tony Thomas and done some adventures in the networking arena. From starting the ventures in the suburbs of Chennai, he become one of the top richest 100 fellows (Forbes 2020).
The book introduces us to Pramila, Sridhar’s wife as well. It is very important to have a supportive spouse, friend(s), relatives, family, team,… in order to work dedicatedly to fulfil your dreams.

The book also talks about a decisive moment in Sridhar’s life.

The startup encountered a moment of truth in 1997 when they had a revenue of 2 million USD, and there was an offer to buy the company at 25 million USD.

An entrepreneur’s decision in such times decides the course of the business.

The book also talks about Salesforce and ZOHO’s business models. This will give an ample idea about the functionalities of both the companies.

The tips for bootstrapping, the importance of choosing the right location for the business and other important segments are worthy guidelines to follow, especially by entrepreneurs.

It is wroth to note that the book also talks about a new programming language developed to meet the requirements. Also, like most of the tech-prenuers, Sridhar also believes in knowledge and not degree(s). Most of the employees of this tech company doesn’t hold the engineering degree! They surely have the skills required, of course.

A perfect guideline for an existing or wannabe tech-entrepreneur. And, if your are a Kindle Unlimited subscriber, you shouldn’t miss it.

Zero to Billions – The Zerodha Story By Ashish B. | Book Review

Startup Lessons from Zomato By Ashish B. | Book Review